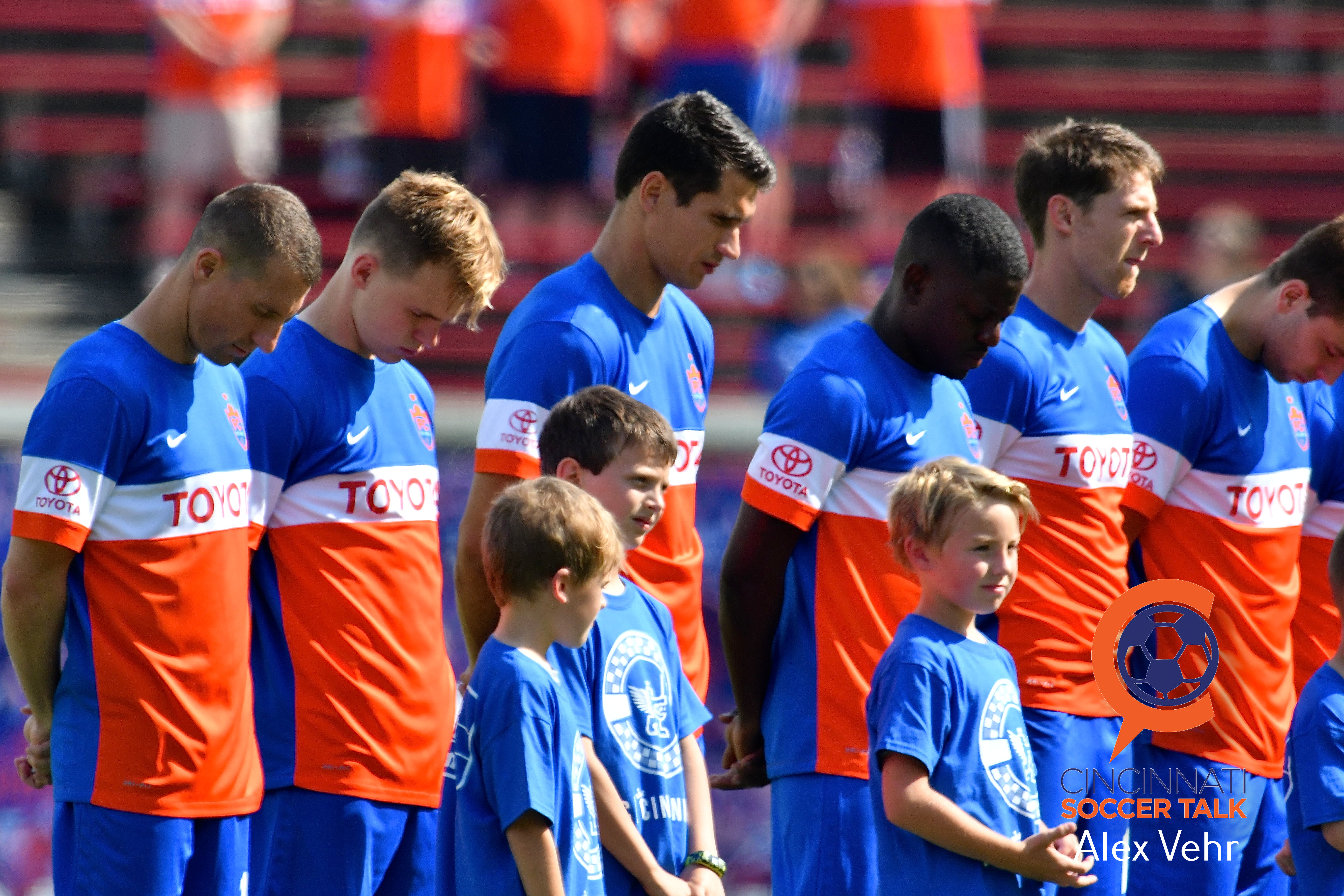 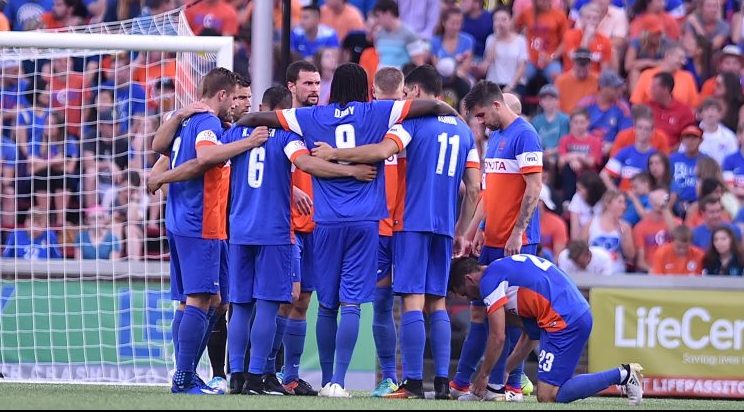 At the top of the list of announcements, Berding mentioned that a core of 9 players will be returning from this year’s squad with several other players in negotiations with the club.

FC Cincinnati has exercised the options for Matt Bahner, Garrett Halfhill, Justin Hoyte, and Kenney Walker and re-signed Corben Bone, Danni König, and Jimmy McLaughlin for the 2018 season. FCC had already signed Josu to an additional year in August and Berding said that he and newcomer Sem de Wit would both remain under contract with the club for 2018.

Berding and Koch met with their roster after Saturday’s loss and put together a gameplan going into the 2018 season with the message to “get better” at every position. While not currently under contract for 2018, FCC is in continuing discussions with Austin Berry, Mitch Hildebrandt, and Djiby Fall. Berding also mentioned that plans with Harrison Delbridge, Andrew Wiedeman, and Paul Nicholson will be announced at a future date. Announcements for these players will be “made in a couple weeks” according to the GM.

Contracts for inaugural FC Cincinnati players Dallas Jaye, Dan Williams, Tyler Polak, and Pat McMahon have expired and will not be re-signed. Berding did state that the group in which he referred to as the “Inaugurals” will be brought back to make a group appearance at a future FC Cincinnati match. Pending any additional re-signings by the club, only Kenney Walker, Corben Bone and Jimmy McLaughlin remain from the 2016 group.

After the roster announcements had been made, Berding pivoted to the plan going forward while reflecting on past mistakes.

“Although we did not end the season the way we wanted, we had a successful second year and I thank the technical staff and the players for all the hard work they put in, as well as the fans for their support. We had an incredible U.S. Open Cup run where we advanced past five opponents in the tournament on our path to the semi-finals. There were many amazing moments for the team that we will build upon,” said Jeff Berding, “We saw the USL dramatically improve from 2016 to 2017 and frankly, we did not do all the things we needed to do in the off-season to prepare appropriately last year. That will change this off-season. The Eastern Conference was a tight race with four different league leaders over the year and we expect the talent level to continue to rise next season. To be a winning franchise, we need to improve our roster across the board. We need to be better as this year was not good enough. We have the coaches in place to lead the way, supported by tremendous owners, a strong front office and the best fans in the USL. Our city deserves more and we are committed to doing all we can to make Cincinnati a championship city. We wish all our players who will be leaving us the best. They will always be a part of the FCC story and they have our respect and admiration.” 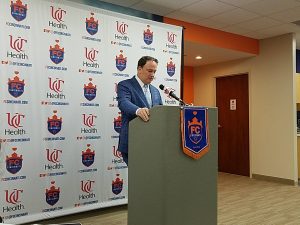 The approach to 2018 will differentiate significantly from 2017. “After our first season, we didn’t handle things the right way. We didn’t get the work done appropriately. Players were given almost 4 months off. Player personnel decisions were not made promptly,” said Berding. “And as a result, we made 8 roster changes after the season began. We started the year off behind and chemistry and things that you would want to have in place in the pre-season to build your squad were not done effectively and that played a part in why were inconsistent this season.”

Berding mentioned that the clubs are also prepared to make additional moves pending the MLS expansion decision in late December. “As we manage the budget, the player budget, there certainly could be a scenario… maybe we held some money to the side should some big-time opportunity present, after a prospective announcement. But we cannot base our roster on something outside our control.”

As for the 2018 season, the timeline for players begins soon. Koch and Berding mentioned that the 9 players under contract will begin training on Monday, October 30th and will stay in Cincinnati until the Thanksgiving holiday. Around this time, contracted players will be allowed to take a break until the squad returns to Cincinnati for preseason on January 15th. This is a significant change from 2017 as players returned to Cincinnati around the first week of February. Berding also looks for a full roster in time for January, “we certainly intend to have our roster set before our players return for the preseason.” Koch and Berding want to get the group in early to help “develop chemistry which will be a foundational core.”

The group that will represent FC Cincinnati in 2018 is still a work in progress but will be designed to improve one another. When commenting about the lack of Mitch Hildebrandt under contracted players Koch stated that the goalkeeping group, as well as the entire roster, will “be a competitive group that will push each other to get the most out of each individual player”. Also when asked about the overall level of player the club hopes to bring in pending an MLS bid, Koch mentioned, “if we get the go-ahead from MLS, whenever that may be, we can talk and maybe entice players that would like to be part of the journey with us.”

If this is indeed the case, expect FC Cincinnati to have a large portion of the roster signed before Christmas, with some elite players targeted for after the new year.

FC Cincinnati is still in negotiations for their 2018 pre-season but is planning to return to the IMG Academy in Bradenton, Florida for a series of friendlies. Cincinnati also plans to continue the tradition of pre-season friendlies in the Tri-state before the season officially kicks off on the weekend of March 16th-18th.

* FCC will not exercise the options for Kadeem Dacres, Marco Dominguez, Aodhan Quinn, and Aaron Walker. Contracts for Kevin Schindler and Mélé Temguia have expired and will not be renewed while the loan term for Kyle Greig from Vancouver Whitecaps has ended.

It is great to see the club moving quickly to fix the errors of 2017. While the club exceeded expectations in the 2017 US Open Cup, the USL regular season and playoffs were a disappointment. While not naming former FCC Head Coach John Harkes by name, it looks as if Berding learned a big lesson from the last off-season and wants to implement changes immediately. Look for news to trickle out in November with new signings and improvements to the club.

While it is sad that FCC is losing many original players, they will not be forgotten. The “Inaugurals” coupled with the new signings in 2017 brought glory to our club through their performance in the USOC and when interacting in the community. We appreciate their time with the club and wish them the best.

I am also impressed by the commitment of the ownership to allow the team to begin their season early in 2018. That is an extra month of housing, contracts, training, etc. that must be paid for. While 2017 looked like the year of “talk” for FCC, 2018 looks like it may be the year of action.