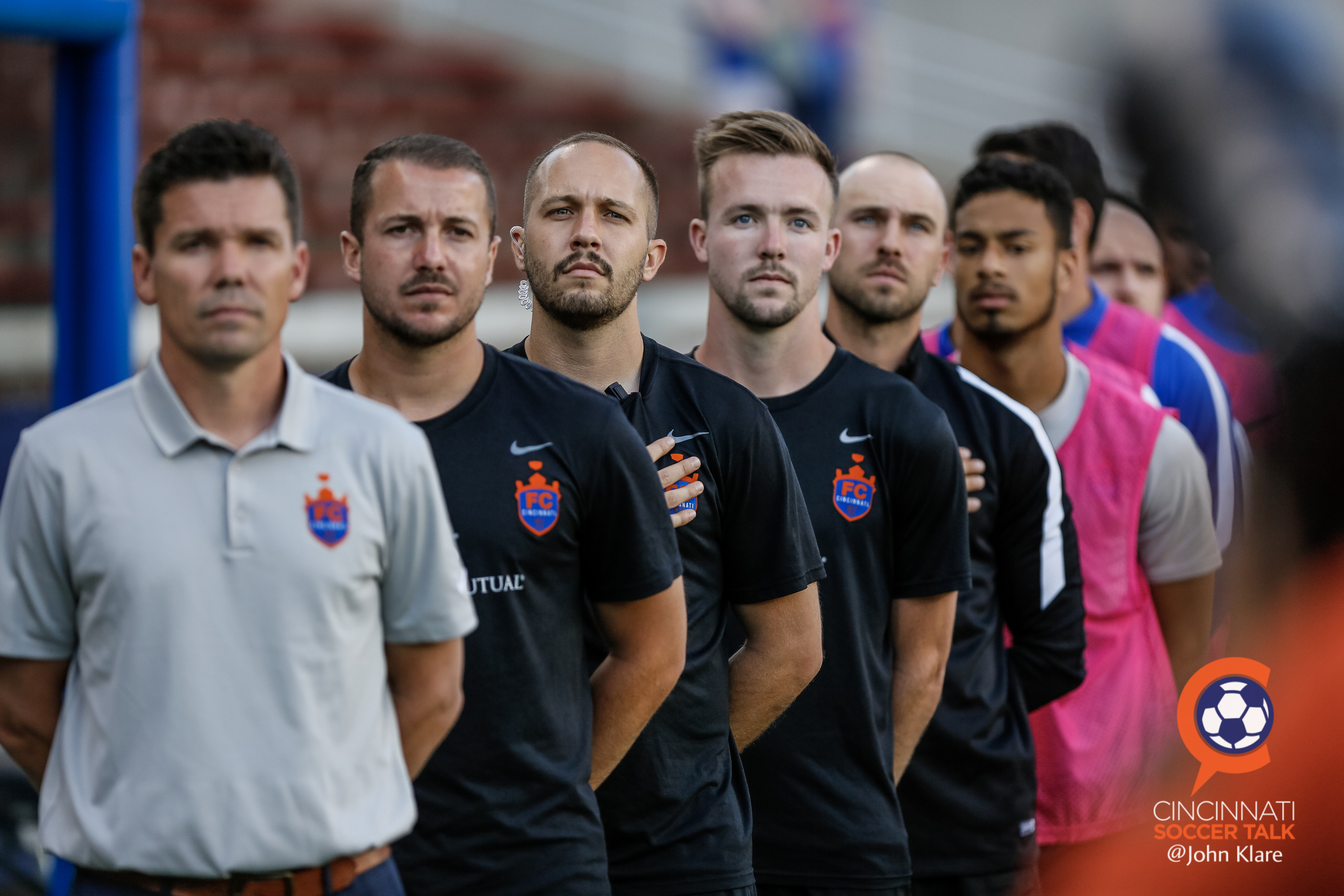 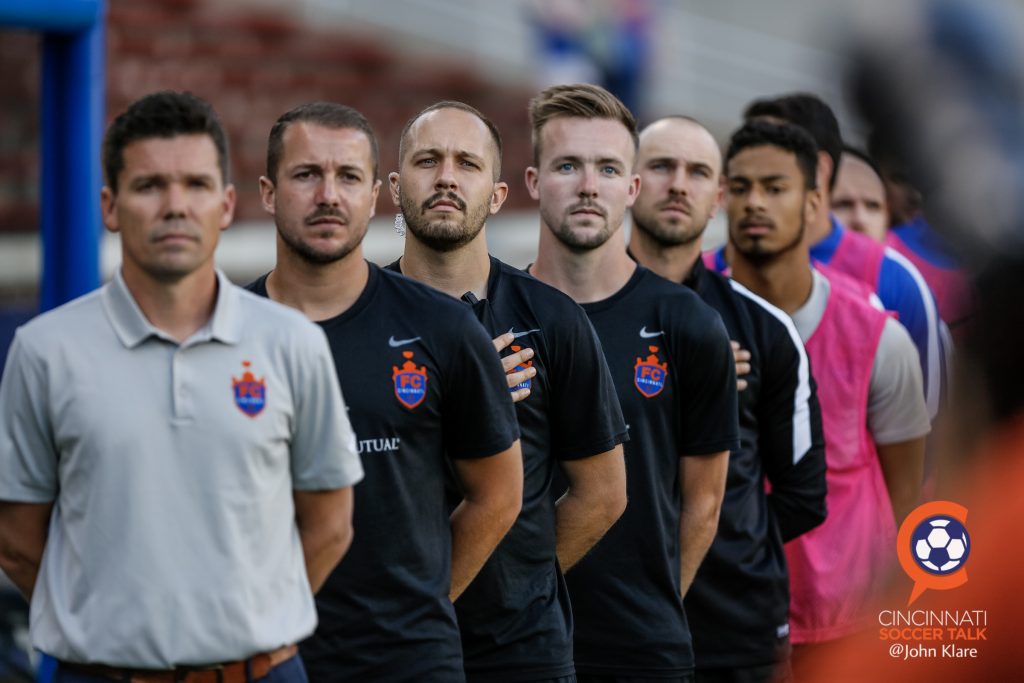 FC Cincinnati President and General Manager Jeff Berding outlined many changes ahead for FC Cincinnati in his recent press conference. Nine players have been re-signed for 2018 and a new off-season program is being implemented to improve the performance of the squad.

We gathered the Cincinnati Soccer Talk staff to discuss our opinions on the changes and what they may bring for the 2018 season.

Question 1: Which unsigned player do you hope FC Cincinnati will bring back in 2018?

Brad: If I’m bringing one player back it has to be Mitch Hildebrandt. He was Keeper of the Year in 2016 & led the league in saves this season. Yes, he didn’t have his best game in the playoff loss and gave up more goals than last year, but that was due to the failure of the squad in front of him. If Koch & Berding can assemble a group in front of him that doesn’t keep putting Mitch behind the 8 ball then I’d expect to see him back to the form he showed in the Open Cup.

Griffin: I was surprised to see that the club did not re-sign Andrew Wiedeman. He had some flashes of brilliance on the pitch but I strongly believe his best quality is his leadership. He is a player that Koch needs in the locker room and among the squad. Let’s hope the club can convince him to come back for 2018.

Ben: Harrison Delbridge, I don’t think it would be a wise decision to start a new season with a brand new CB core. With the Team keeping De Wit, I would love to see these two get some time to work together as a unit. The key to a solid backline is communication and awareness that can only be gained by time together. Also with Austin Berry’s future in limbo, there needs to be some continuity to start the year. Also with the captain’s spot open, I think it would be a wise decision it to Delbridge.

Bryan: While I agree with Ben that I would like to see Harrison back in 2018, I’m not sure that any of these players are irreplaceable. We had many holes on this team and I am all for the club going out an trying to find upgrades. Like the guys said on Tuesday’s episode, we need to shoot for a high caliber of player. If we hope to win the USL Cup, we need an individual that truly makes a difference on the field. We need to find a Marcel Schafer that brings a professional work ethic and a person that will work with a potentially younger group of players. Does FCC have the connections to get a player of his stature?

Bill: I was pleased not to see Paul Nicholson on the list of players let go. He didn’t get a lot of playing time this year which concerned me. He’s one of the smarter players on the pitch and stepped up in a big way several times this season. His ability to play in both the central defense and holding midfield makes him extremely valuable. He was in the 18 for every open cup game and notably played against the Crew, helping maintain a clean sheet. With a lot of new talent coming into the team next year, it will be important to have players like Nicholson who can provide leadership and experience.

Question 2: Which non-roster change excited you the most? Koch traveling, earlier pre-season, year-round training or the aggressive approach?

Ben: Aggressive approach, with new teams it is easy to create “untouchable” players due to a short club history. Koch came out and let the players know, that no one is safe. They WILL be bringing in top talent to challenge at every position. While I can see some fans upset with their favorite players not seeing the field as much, I expect the quality of the team’s play to increase massively with this aggressive approach.

Griffin: It was very reassuring to see Berding and Koch display their urgency in solidifying the roster for 2018. Koch stated that he is boarding a plane hours after the press conference to meet with potential signings for the upcoming season. One of the main reasons I support this club is the culture of advancement and not staying complacent. It could have been easy to sign the majority of the squad for another year and work on chemistry. But Berding and Koch have decided to go on the hunt for more talent, and they are starting the hunt less than a week from ending the 2017 campaign. No time off, I have full faith in Berding and Koch to get this club performing at a high caliber.

Brad: I’m a big fan of the club getting things together earlier than last year with the preseason starting Jan 15th. Not only does it shorten the off-season for fans but it allows the team extra time to build rapport with all the player changes coming. Berding noted in his press conference that he felt the team was apart too long (4-months) the last off-season and by the time they realized they didn’t have the correct pieces in place it put the club at a disadvantage. With 8 players brought in over the regular season, the team never was able to get into a rhythm and we saw how it affected the results. He also noted that their plan is to head to Florida earlier and that will get the club in competitive situations and allow them time to make changes before the season starts mid-March.

Bryan: I am excited that the club appears to be moving fast in correcting errors from 2017, I’m not sure that all these changes are actually new to the club. We heard in interviews last off-season that the players were sent with training plans and that they had gathered for mini-camps. Yes starting pre-season 2-3 weeks earlier is great, I think filling out the roster earlier will make more of a difference. We need a consistent approach badly. My question remains, what happens in June if we don’t get the results we are looking for? Where will the blame lay?

Question 3: Which position does Koch/Berding have to address first & should FCC work to get younger?

Griffin: Koch has shown the urgency in taking this club to another level, but in order to do this one position needs to be addressed, the center backs. Mitch led the league in saves in 2017, which might seem impressive but it is a testament to the defense allowing so many shots to reach Mitch. While Delbridge was one of the most impressive defenders in the league, his status is up in the air for next year. We need to see a dominant back line next year to solidify our chances at winning the league.

Bill: Though there are many positions within the team that need attention, I think Coach Koch needs to address the situation on the wings immediately. Our wing players in 2017 were Jimmy, Dacres, Wiedeman, and Schindler. At times we had Konig playing as a wing which is not a natural position for him. Dacres and Schindler have been let go and Wiedeman is in question at this time. Seems like we have one wing available. Jimmy’s quick but not that quick. We need some young speedy talent to fill those openings, players that can run 90 minutes, take on defenders and can shoot or cross appropriately.

Brad: Berding said that Koch and Yoann will be scouring the globe for players and if so, the first place they need to start is in the midfield. Not only do we need to add depth to compliment Corben Bone and Kenney Walker, but we need players brought in to bring the best out of these two players. You saw Tampa bring in Marcel Schafer in 2017 and his presence was the difference in the playoff match. Too often Bone & Walker had to carry the squad on both sides of the ball. Bringing in a high-quality central midfielder will allow Koch to clearly define roles in midfield and help solve the disconnect between our back line and players up top. Now as to if we need to get younger, I don’t necessarily think that’s the case because most USL contracts are 1-2 years long. I think it’s more important to get the best players possible whether it’s a 35-year-old or a 22-year-old.

Ben: Until the midpoint of the 2017 season, you would not have said we had any problem at the GK position. Now standing at the end of the season, it is not exactly a pretty picture. There was just not enough coverage in that position. Rarely did you see any type of rotation at the Goalkeeper spot. While your starting goalkeeper needs to know the job is his, it is just not possible to play every game in a season at a consistently high level. You could see Mitch make errors late in the season that FCC fans have not been accustom to seeing. I still think the team should bring him back for 2018, but he needs to be pushed by a solid number 2 keeper. Even if Mitch keeps his job, the team should feel comfortable when the backup steps in.

Bryan: I think that adding to our midfield will be huge for the club, but I would like to also take this question off the field. Will Carl Lindner II& & Jeff Berding make more of the technical staff full-time? He mentioned that two (Koch & Damet) are full-time and 2 are part-time? I don’t know what two he is mentioning outside of Aaron Powell our athletic trainer or Ben Yauss, the strength and conditioning coach. Why can the club not work to bring these guys on full-time if they are not already? We talk like we want to be a huge club and that we are the hottest in the US. Then let’s get more people in the door to give the players and Coach Koch the support they need. But yes, also a midfielder…