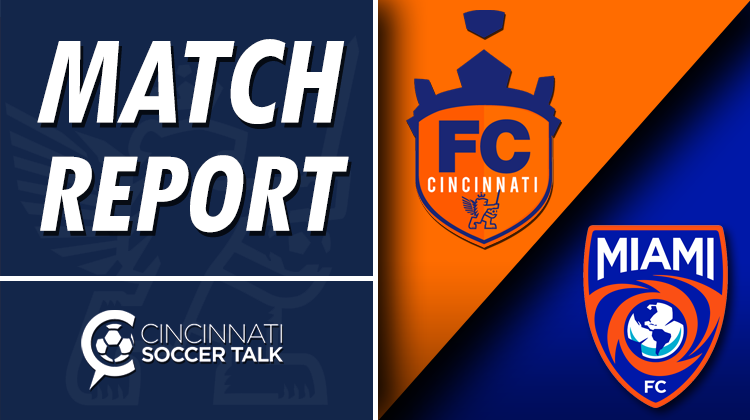 RECAP: A strong first half by FC Cincinnati. The CST key to the game was to keep the score low and get into half-time with a nil-nil score. The Boys in White almost did better than that. Cincinnati looked downright dangerous in the first half stealing the possession game away from Miami FC. Miami thrives on a possession and FCC was able to disrupt their passing by clogging up lanes limiting chances going forward. With the humidity high, both teams seemed to play in slow motion at times. Midfield was the battleground and that is where Cincinnati won. Miami FC struggled to get the ball to their star forwards. A few key chances, were wasted when they did.

Cincinnati had chances of their own in the first half. Koch’s plan seemed to be an US Open Cup staple. Get the ball to Djiby. Several crosses came in from the wings but the timing was slightly off each time. Those plays built confidence and Miami FC let Cincinnati get far to comfortable on their pitch. After an additional three minutes, Cincinnati indeed made it to the half 0-0.

Things started a bit shaky for FC Cincinnati in the second half. The home team came out fired up after the break. The Florida team slowed the game down, maintained a strong midfield and kept possession. Miami FC started to look like well Miami FC. Luckily, the away team settled back down after a few drives into the box by the opposition.

Back and forth play continued between both teams and the longer the game went scoreless Cincinnati fans built up hope. Then the moment came in the 68th minute. The ball was passed to Hoyte from midfield. Hoyte, who flirted with an attack all night. The Englishman danced his way into the box and passed the ball past two Miami defenders to a waiting Djiby. With the flick of a Senegalese foot, the ball went in and back home in Cincinnati, a city went crazy. Bars packed to occupancy limits exploded, twitter broke, and then the Miami started back up with the ball and pure tension took back over.

It wasn’t long before the subs came rolling in for both sides. Miami focusing on the attack and Koch on the defense. The clock seemed to tick slower than a clock has ever ticked before. Poku started to find his footing as the match wore down. Miami drove, Cincinnati countered. Most of all, the defense stepped up. Harrison Delbridge played lights out in the final twenty minutes. Austin Berry had an amazing diving save in the box. Finally, the whistle blew and the Orange and Blue won. Let it sink in, Cincinnati is in the US Open Cup Semi-Finals.

D2 WARZZZ: The USL wins in the offseason. USL wins in the open Cup. FC Cincinnati has been called the USL flagship. Cincy led soccer headlines across the US as the team continued to impress nationally. Miami FC is also a newish team in their 2nd year. A team that made headlines of their own with big money signings. Miami FC swept the NASL spring season and became the signature of the a league that the NY Cosmos dominated just one year prior. The NASL almost collapsed during the winter of 2016 and a war over division two erupted between the leagues. Things have gone quiet between the leagues since but the USL is the last D2 league standing in the Open Cup.

Cincinnati Wins:  When is the last time Cincinnati could celebrate a great sports moment? Take away the previous Open Cup wins and think. Home run derby? Big Red Machine? Great sporting moments are hard to come by and Cincinnati has been waiting for a team to give them hope. FC Cincinnati has delivered and then some. Soak up the wins Cincinnati, you deserve it.