The Orange & Blue had a disappointing 1-1 draw against the Charlotte Independence. The clubs battled back after conceding early with Justin Hoyte opening his account netting the equalizer. This week Romario Williams and the Charleston Battery come to town for the first time since the 2016 USL playoffs. Each and every game we do our best to predict the outcome of the FC Cincinnati match. Here’s how some of the staff here at CST feel things will transpire Saturday night vs. Charleston.

In an odd irony, Charleston played Atlanta on Wednesday in the open cup when Cincinnati played Columbus. On Saturday, the same 4 teams match up again. The Crew vs. Atlanta and FCC vs. The Battery. Charleston are coming to Nippert off a hard fought loss. The Orange and Blue are still riding a high off their defeat of Columbus. The FCC deep roster will serve them well. With some fresh players on the pitch, home field advantage and the confidence of their open cup victory, Cincinnati will finally find the elusive victory they have sought against the Battery. A 1-0 victory for the soccer ball kicking good guys.

Well, well, well….. FCC pulled a little 1-0 upset off Wednesday against the instate MLS team, Columbus Crew. That is an amazing result, however, the effort FCC had to exert was potentially harmful for this Saturday League game against Charleston. FCC depth may be deep but is it deep enough. Dacres, Bone, Josu, Mansaray could all play major minutes because of the effort our boys put out in that Open Cup Victory. The other aspect the Orange and Blue have going for them besides depth is the Battery had to exert a lot of effort in their 3-2 loss to Atlanta United Wednesday. FCC will have to watch out for Romario Williams who only played 45 minutes for the Jamaica National team. I think tired legs start to kick in for our boys and we come crashing back down to earth with a 2-1 defeat.

The spirits have never been higher in Cincinnati. Fresh off of a victory in the US Open Cup against Ohio rival Columbus Crew, the boys look to take down first place Charleston. I think Koch and club will use their momentum to a one to nil victory.

No rest for the weary. FC Cincinnati beats the Crew on Wednesday and then turns around and plays the #1 team in the USL on Saturday. The silver lining is that Charleston played on Wednesday as well. The Battery held their own with Atlanta United falling 3-2 without their best player. I expect Romario Williams to be back in the lineup and fresh and that is what gives me shivers. I’m behind in this growler competition, so I need to make some daring moves to gain some points. 2-0 Charleston Battery win at Nippert. 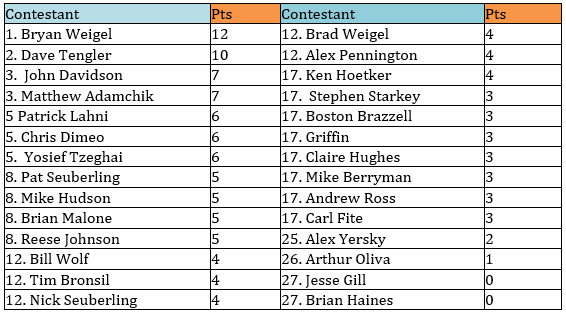