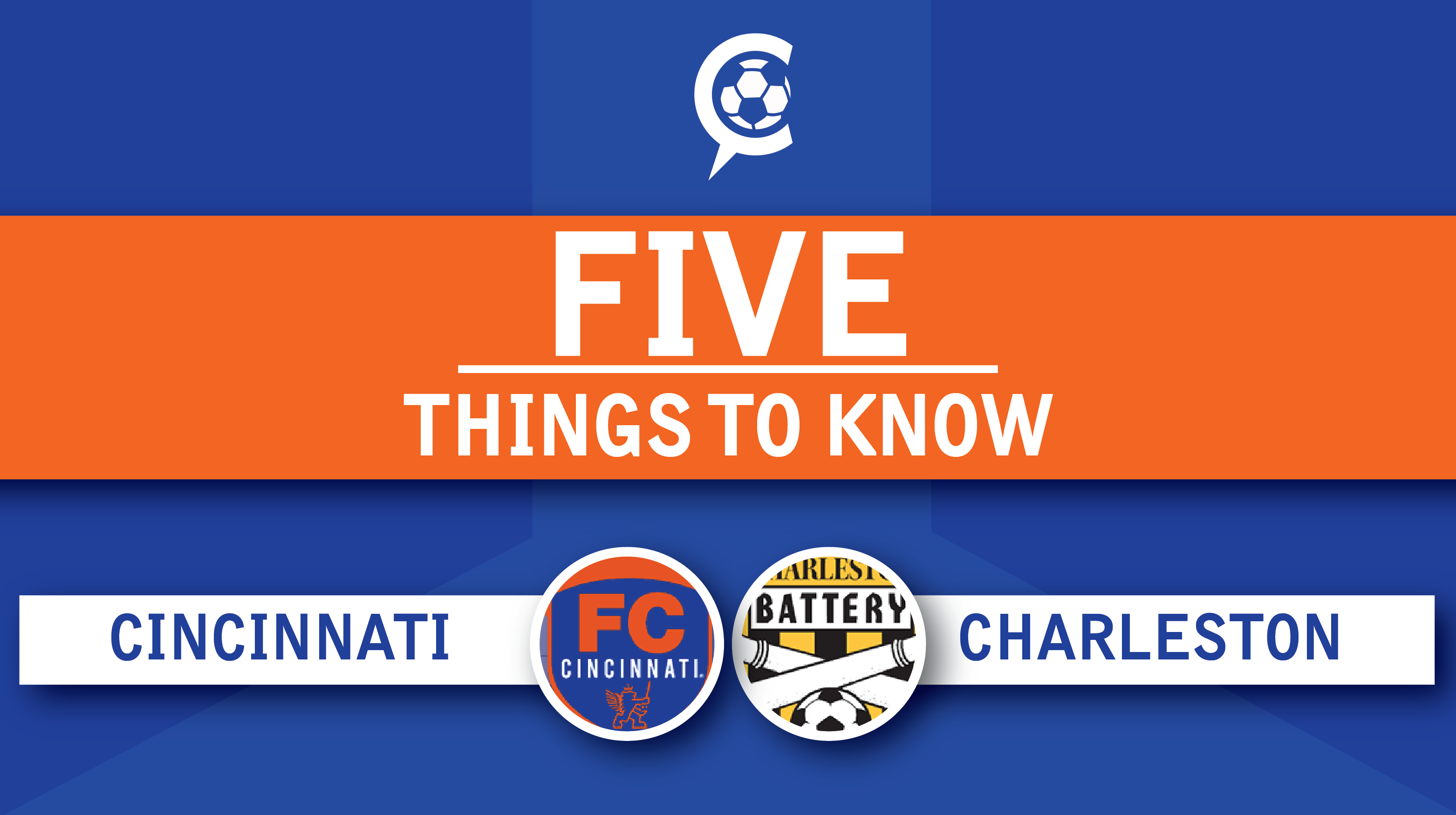 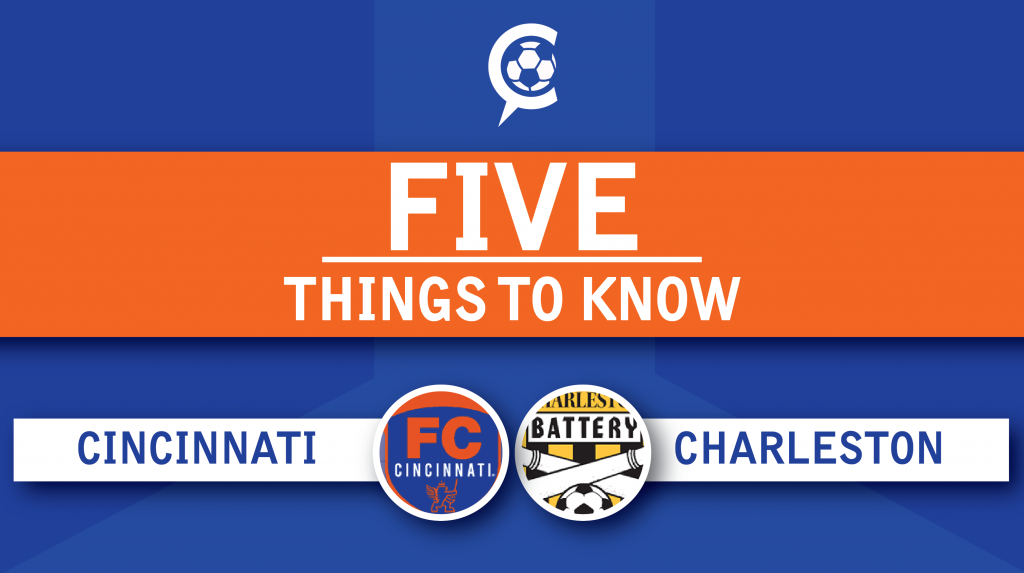 For the first match of the 2017 regular season, the USL scheduling gods have squared in a rematch of last season’s first round playoff contest, FC Cincinnati and the Charleston Battery. That match sadly saw Charleston advance 2-1 over FCC in front of 30,000+ fans at Nippert Stadium. FC Cincinnati enters the match with high expectations for the 2017 season. What a fitting way to kick things off on the right foot than going to the team that eliminated FC Cincinnati last season. Here are 5 Things to Know going into Saturday night’s match as well as the new March to Matchday podcast!

Join host Bryan Weigel for the newest addition to Cincinnati Soccer Talk lineup. March to Matchday will provide an in-depth preview of the upcoming opponent as well as how FC Cincinnati can best defeat them. This show will hopefully fit in your drive time to work, to the pub on game day or lead you right up to game time. We hope you enjoy March to Matchday #1!

Rematch of 2016 First Round – This match will feature a completely different atmosphere than the one in October in front of 30,187 fans. That match, things seemed to go in favor of FC Cincinnati early. A golazo by midfielder Eric Stevenson sent Nippert Stadium into a frenzy. However, it was not to last. Charleston matched the score off a throw in and a set piece. The Battery then used their stout defense to bunker and repel every FC Cincinnati attack. FCC needed an additional playmaker to open up space, but there was none to be. This position could be filled by newcomer Daryl Fordyce. If we can expect what we have seen from the interplay between Fordyce and Djiby Fall, FC Cincinnati might be able to break down the Battery and get their first win over the Battery. 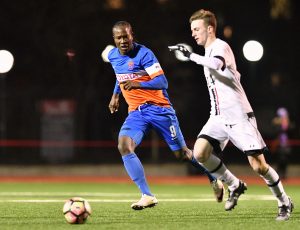 Getting Djiby With It – The Senegalese Striker has taken to his new club rapidly. After joining the club right before their trip to the IMG Academy in mid-February, Fall scored in 5 of 7 games (including the US U-17 friendly). That number would have increased if not for a bad decision by VAR in the first match of the preseason. Fall has been described as a mentor to some of the young players and can be seen dictating where several of his attacking cohorts should make runs during an offensive build-up. It’s not all about the goals for Djiby. He has assisted on 1 goal this preseason, but should be credited with helping others after pulling defenders and opening space for other. Look for Djiby to get the start up to and lead FC Cincinnati offensively in 2017.

Results Matter – No matter what went down over the course of the 2017 preseason, results will matter most. FC Cincinnati parted ways with Head Coach John Harkes in early February to much criticism and doubt.  GM Jeff Berding has heaped praise on new FC Cincinnati Head Coach Alan Koch who he named as Harkes successor immediately following the move. Coach Koch seems to have earned the trust of the majority of FCC supporters following coutless public appearances and being open with the media about his expectations with the squad. However, the move to replace Harkes will be measured immediately following every match. If FC Cincinnati can put results together, John Harkes will pass into memory with Koch and Berding looked at as model leaders of our club.

Successful Preseason – In one month, Coach Koch was given the reins of the club and has turned in some decent performances. Outside of the results in IMG, Koch has played a fun attacking style that has led to goals and many more chances. Over 31 matches in 2016, FC Cincinnati scored more than 2 goals 14 times. FC Cincinnati has scored 2+ goals in 6 of 7 preseason matches in 2017. There have been some defensive lapses, but Koch has acknowledged that may have been an issue from his first match in charge. When Austin Berry & Harrison Delbridge have been on the field together, the back line has looked more organized and strong. Yes, the results haven’t been there like the 2016 preseason, but you have seen the 2017 club play a more complete, dominating style in many of their games. I think this will be a club that continues to improve going into the 2017 season.

Scouting Report – The Battery return a bulk of their 2016 roster. Atlanta United Forward Romario Williams has been loaned to the Battery following a stint with the club in 2016. The Jamaican scored 10 goals over 29 matches for the Battery including one at the death in the 2016 opener. Center-back Taylor Mueller returns to lead the defense but will be missing longtime counterpart Shawn Ferguson, who retired this offseason. He looks to be joined by Forrest Lasso or former Toronto FC CB Skylar Thomas. USL veterans Maikel Chang and Heviel Cordoves return to the Battery with this marking the 5th season for Cordoves. Look for Charleston to remain compact at the back and utilizing their speed on the counter. In the 2016 playoff match, FC Cincinnati dominated possession, but their attack broke upon the large Battery defense. Their roster is filled with size and Charleston will look to punish FC Cincinnati off set pieces if possible.

Stay tuned to Cincinnati Soccer Talk for our Growler Cup Staff Predictions and more news and information leading up to the Charleston Battery match!

Our very own Boston Brazzell (@BostonKeith) will be traveling down to the Palmetto State to cover Saturday’s FC Cincinnati match. Make sure to check out our Twitter (@CincySoccerTalk) and Facebook pages to get up to the minute information on Boston’s trip.

CST LIVE at BUCKET HEADS: Cincinnati Soccer Talk is proud to announce that we will be having our first live & in person show 6 p.m. this Saturday night at Bucket Heads Bar & Grill before the FC Cincinnati match. We are teaming up with supporters group the Bailey Bastards to help to raise money for Sports Games for Kids (SGFK).

TV: This contest is set for a 7 p.m. EST kickoff on Saturday night. Broadcasting partner Sinclair Broadcasting Group will now air all FC Cincinnati home & away matched. Saturday’s match will be live on Star64 (WSTR). The match will also be broadcast at FC Cincinnati’s pub partners or by Streaming internet on USL’s Youtube station.