Welcome to the new CST segment “Around the East.” Each week we will be recapping the games that took place in the USL eastern conference. If the West wasn’t a wasteland of boredom we would recap that, too. I kid, I kid, Western readers; the truth is the winner of the USL cup will come from the East again, so why waste your time?

The USL is so close to kicking off its season. We start our newest segment by giving you the preseason games that dropped the biggest hints on what to look forward to in Week 1.

Most USL fans would not argue that Tampa Bay has built a quality squad on paper. Miami FC (NASL) gave the rest of the eastern conference a perfect example of why rock beats paper. The Rowdies were in control much of the match but never could get the elusive goal. The match was a shot fest for Tampa but Miami’s keeper Vega was solid. Joe Cole even took a shot in the 32nd minute that was double saved by Vega with the second shot at point blank range. Miami eventually saw an opportunity at the 67th minute and buried consecutive goals in consecutive minutes. The NASL team threw a third goal on for good measure, off of a PK in the 75th minute.
Hot Take – Tampa Bay showed they can be beaten by a quality side in this match. The strong attack by Tampa, opens holes that need to be taken advantage of. 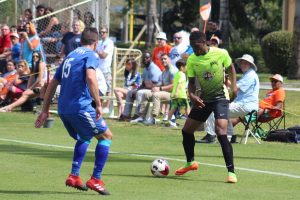 This weekend was a preseason showcase of another USL vs NASL match. FC Cincinnati’s regional neighbors had a party and forgot to send invites. This party would have been a good one to show up late for. The first half ended 0-0 with Louisville looking slightly more in control than the home team. A point was finally awarded to Louisville courtesy of a PK in the 52nd minute. The game ticked on and just when Louisville thought they had won it, a screamer left Indy’s Vukovic foot from 23 yards out. The ball found the upper right net and leveled the match.
Hot Take – I hate to admit it, Louisville looked in control against a strong Indy team. LCFC will be a strong team despite not shelling out cash like Cincy and Tampa. Coach James O’Conner is the real deal and will have players ready.

Charleston Battery hosted it’s annual Carolina Challenge Cup in February. The exclusive event was attended by a bunch of MLS teams and the Battery finished 3rd. The newly created Atlanta team struck early, scoring in the 4th minute. Charleston bounced back quick and leveled the game in only the 18th minute. In the 45th minute, Atlanta decided to put the match away striking the bottom of the box and then parking the bus. Charleston stayed in control the last 45 minutes but could never break all the way through the Atlanta defense.
Hot Take – The Battery pose a threat to the USL elite. This team will not go down easy and will stay in most matches. The team that FC Cincinnati could not beat in 2016 does not look any weaker in 2017.

Stay tuned to our coverage this week as I head to Charleston to cover the 1st FC Cincinnati game of 2017.