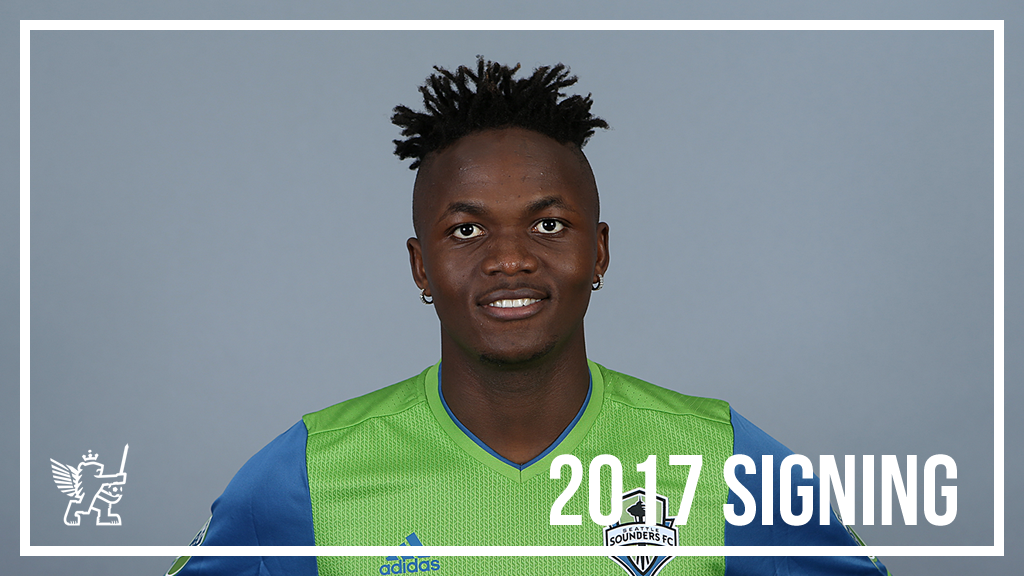 It was announced on Monday afternoon that FC Cincinnati has acquired USL top prospect, Victor Mansaray, on loan from Seattle Sounders FC. The young starlet will join an already loaded roster as Coach John Harkes and GM Jeff Berding look to complete a roster that can score 62 goals and compete for the USL Championship.

Mansaray topped the “USL 20 Under 20” list last year, coming in at Number 1 as the leagues best young talent. He is also a member of the US Soccer National Team set up, logging time on both the U-20 and U-18 squads.

The forward comes to Cincinnati after 35 appearances for the Seattle Sounders USL affiliate S2, scoring 7 goals and 2 assists. Mansaray has appeared in 6 matches for the parent club competing in 3 MLS matches, 2 US Open Cup contests and 1 friendly.

Signed by the Seattle Sounders as a Homegrown Player on Nov. 5, 2014, Mansaray can fulfill a wide variety of options including striker, winger and as a creative attacking midfielder. Referred to as a “Bullet Train”, Victor will add a needed facet to the Cincinnati attack.

The forward is known for this technical ability and moments of flair. “Vic is more willing to try trick plays and the like. He will choose to pass using the outside of his foot rather than a simple pass,” said editor and founder of SounderAtHeart.com Dave Clark. “He plays with a certain joy and expresses himself in the game. There are times when that hurts his play, as he watches the outcome rather than follow through.”

When speaking to Wednesday’s LIVE SHOW guest, Clark also mentioned that this move may be attributed more to the level of player expected to fill S2’s roster for 2017. “S2 is younger, more focused on developing players for their future then winning games. This year will be even younger than last season as more Academy kids play up.”

When asked more about the differences between the level of competition at FC Cincinnati and S2 Clark stated, “He’s at the point where his talent demands to be tested on a squad that demands victory.”

It may be a while until we see Mansaray in Orange & Blue. The forward is currently with the US U-20 National Team for an 11-day camp while they prepare for the 2017 U-20 World Cup qualifying campaign. If selected for the 2017 CONCACAF U-20 Championship,  where the squad could qualify for the U-20 World Cup, Mansaray could be away from FC Cincinnati until March 5th. Pending a good outcome for the U-20 squad, FC Cincinnati could also see their new loanee selected for the 2017 FIFA U-20 World Cup in South Korea. That competition runs from May 20th thru June 11th with Mansaray potentially being away for the pre-tournament camp and competition.

There is still a large duration of games in April for Mansaray to make his Blurange debut, but Coach Harkes could go the route of early 2016 where he maintained the same starting XI for a long stretch. Mansaray, while not a like-for-like replacement of Sean Okoli, could provide a great target up front if Harkes chooses to do so.

Since FC Cincinnati is an independent USL side, it is unlikely that Mansaray would return to Seattle during the 2017 season. This move seems to be based on continuing his development, but we have not yet heard if FC Cincinnati would have the opportunity to buy the player in the future. His versatility and physical skill sets are something not seen much of in USL. This is one player that could wear the Red, White & Blue in the future and his time in Orange & Blue should be treasured.

For more information on Victor Mansaray, tune into Wednesday night’s LIVE SHOW as we interview editor and founder of SounderAtHeart.com Dave Clark.