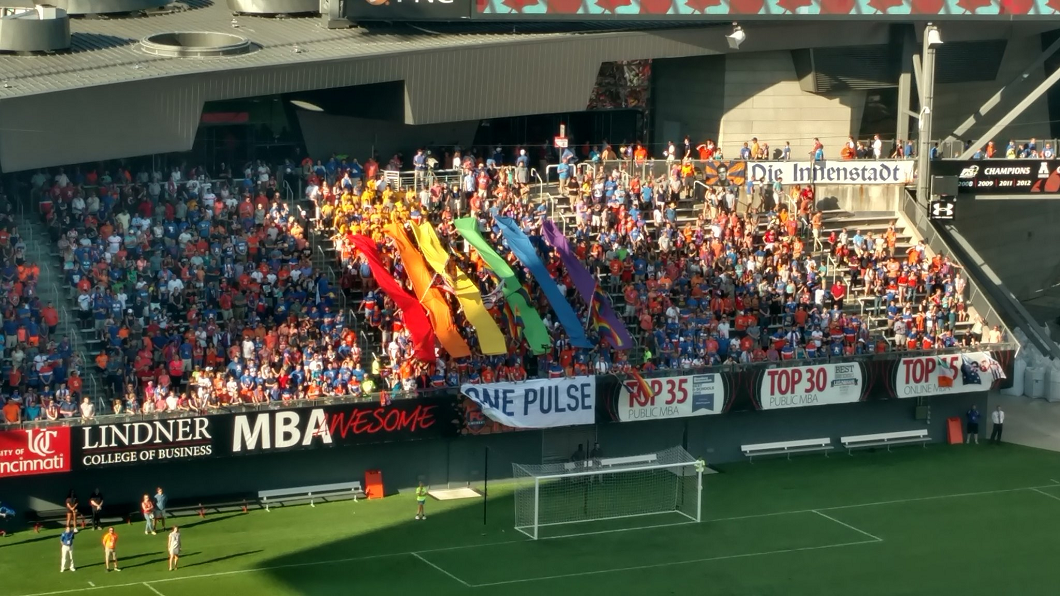 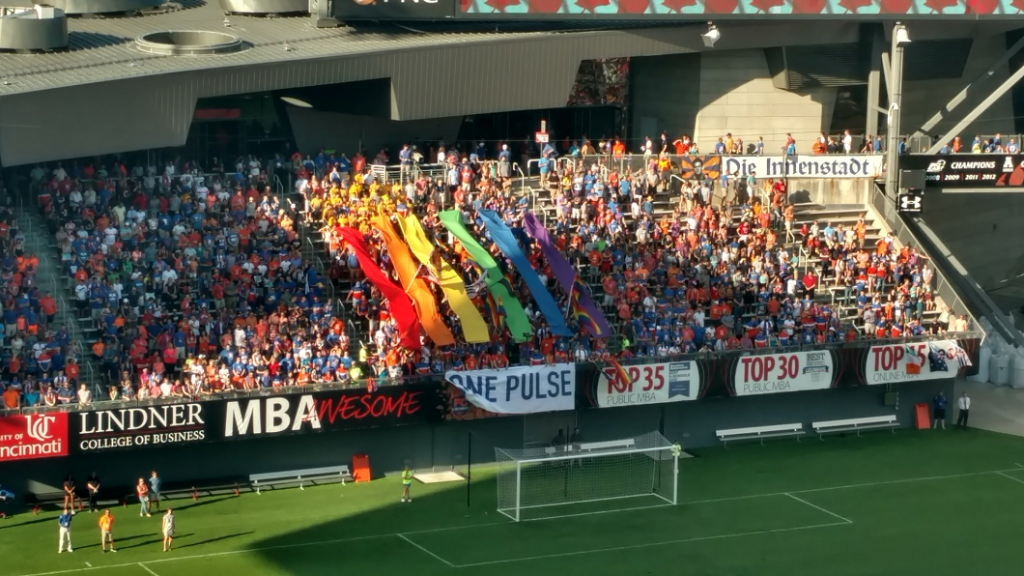 The Bailey honor’s the victim’s of the Orlando tragedy before Saturday’s match. (Photo Credit: FC Cincinnati)

It was a beautiful night Staurday where 19,112 people showed up to watch FC Cincinnati take down Toronto FC II by a score of 2-1. The game didn’t start off well for the good guys when TFC2’s Raheem Edwards had an impressive personal effort putting the away team up 1-0 in the 4th minute. FCC came roaring back with a dominating second half display culminating in 2 goals in 2 minutes behind efforts from Harrison Delbridge and Eric Stevenson. With the win, FCC extends their unbeaten streak to 9 games in USL play.

This week, FC Cincinnati heads down stream to take on first place Louisville City FC in the 2nd match of the Dirty River Derby. They will look to exact revenge from their first match-up after it didn’t go FC Cincinnati’s way. The club suffered a 3-2 loss on April 16th after a first half hat trick by LCFC forward Chandler Hoffman.

Join owner Carl Lindner III tomorrow at 6pm at @MoerleinLH for a special unveiling at the Toyota @johnharkes6 Show! pic.twitter.com/AgtzxGWdQ4

Copa America Watch Parties– FC Cincinnati announced 3 sites to watch the USMNT Copa America match against Lionel Messi and Argentina. For those attending the John Harkes Show at Moerlein Lager House, the bar will host the game with representatives from the club. Members of @AOCincy and @ThePrideCincy will be at Molly Malone’s while Die Innenstadt will be at Rhinehaus in OTR.

To spice things up a bit I suggest you try the game recommended by Alexi Lalas.

Gameday. Up and at ’em! FOX satellite media tour ahead of tonight’s epic #USAvARG game. Drink every time I say Klinsmann, Messi or underdog.

UPDATE- Seats Going Fast!!!- Tickets have been flying off the shelf for the upcoming July 16th friendly against Crystal Palace. On Monday the club announced that they have passed 20,000 seats sold for the game. With the increased demand, the club opened the top bowl for sale Tuesday morning. For more information or to purchase tickets for the match you can visit FCC’s page or call 513-977-KICK.

TV Schedule- The match is ESPN 3’s “USL game of the week”. Former USWNT player Heather Mitts will join the broadcast team and will stream live on ESPN3. WSTR- TV Ch.64 will simulcast ESPN 3’s stream in the Cincinnati area. In addition you can always catch the match on the USL YouTube channel.

If you do not wish to drive to Louisville, Rhinehaus is organizing a Bus Trip to the game. For $50 you can take the bus and they will supply the ticket. If you already purchase your ticket the bus is just $35. You can sign up here. The Pride has a trip as well and costs $27 but the time frame is much tighter.

Tailgating will occur in the lot at the corner of N Preston Street & E Washington Street, just west of the stadium. The Republic of Cincinnati is hosting the tailgate with the Pride & Die Innenstadt. They will provide ice & a gas grill and request that you bring your own beverages, something to grill, and a side to share. Lot opens at 3:30 and we look forward to see you there.

Die Innenstadt– will meet at Rhinehaus in OTR starting at 3 p.m. All Die Innenstadt members will receive 15% off on their tabs.

The Pride– will gather at the Molly Malone’s in Covington starting around 4 p.m. Members of The Pride will receive 15% off their bill.