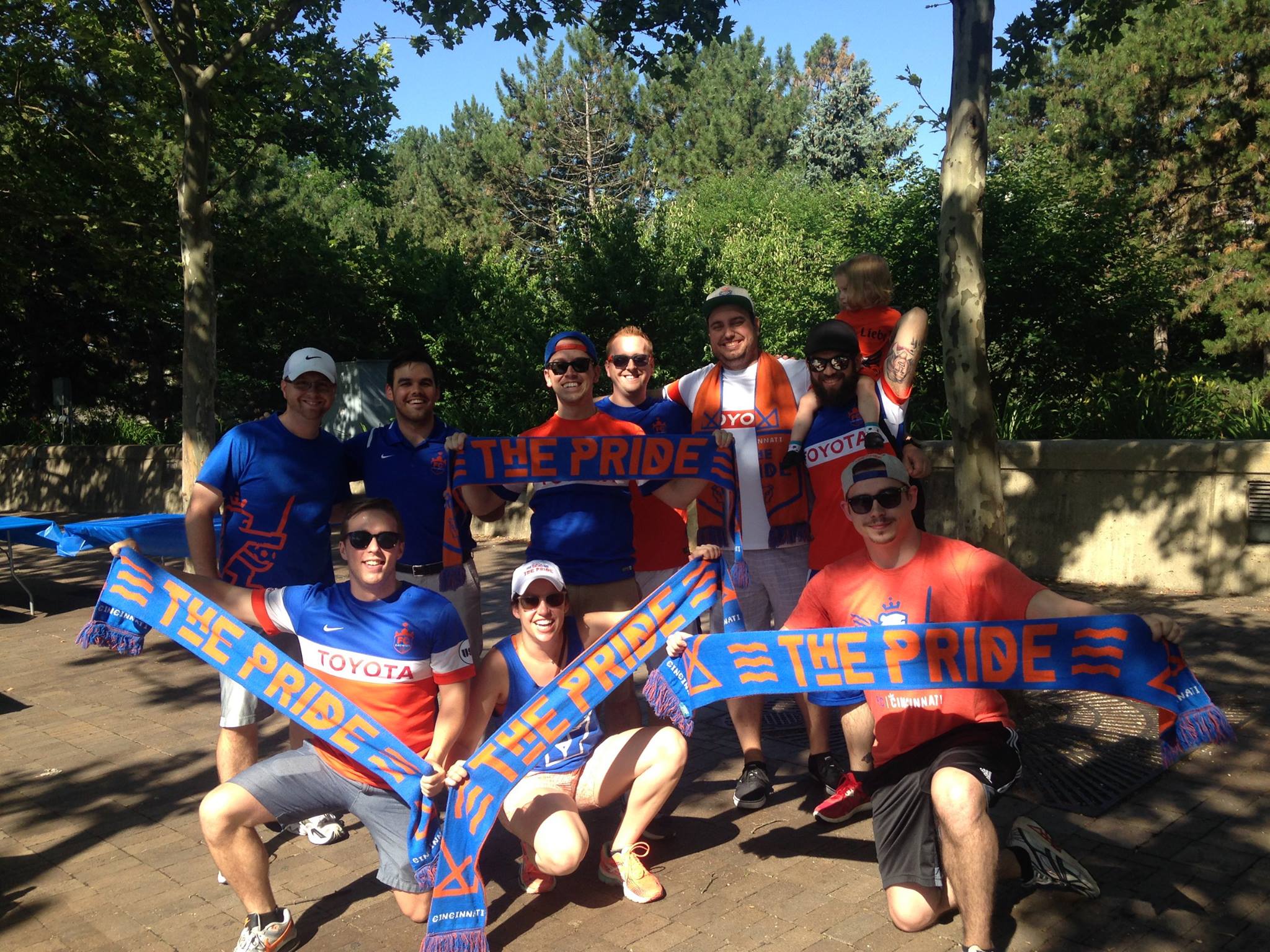 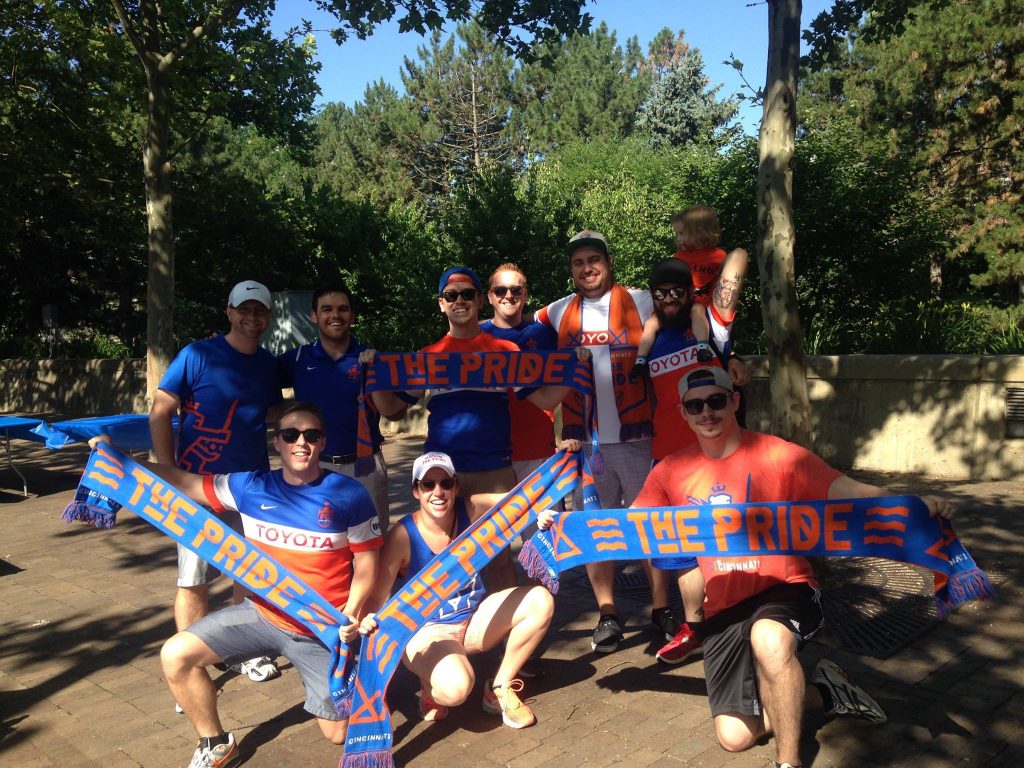 Members of CST, the Pride, and Die Innenstadt at the Walk for Wishes benefiting the Make a Wish Foundation on June 11th. (Photo Credit: Gunner Maschinot‎)

FC Cincinnati took on cellar dwelling FC Montreal on hot, sticky evening at Nippert Stadium on Saturday. The Orange & Blue came away with a 2-1 victory behind a pair of goals by Sean Okoli. With the win, FCC is in 3rd place with 24 pts., 4 pts. behind leaders Louisville City FC with a game in hand. This week John Harkes’ squad welcome Toronto FC II to town as they finish up their 4 game home-stand. It will be the 2nd match of the season against TFC2 following the 2-1 victory on April 24th. TFC2 broke their 5 game winless streak last week with an impressive 2-1 win over last year’s champion Rochester Rhino’s.

6/25-Dirty River Derby Part 2- FC Cincinnati is heading south to Louisville on June 25th to face LouCity in Part 2 of the Dirty River Derby. LCFC has reserved a block of tickets for visiting Cincinnati fans. You can purchase your tickets through the Louisville City Box Office and enter the code FCC2016. If you do not wish to drive, Rhinehaus is organizing a Bus Trip to the game. For $50 you can take the bus and they will supply the ticket. If you already purchase your ticket the bus is just $35. You can sign up here.

The Beautiful Game in a Beautiful Place- Tom Niehaus from Die Innenstadt wrote a tremendous piece this week on the history of Nippert Stadium. Tom details how the stadium got its name, early lighting of the stadium, and other neat moments spanning its lifetime. Ronny Salerno did a great job providing photography as well. I encourage you to give the article a read.

USL Q&A with Jeff Berding– FC Cincinnati President and General Manager Jeff Berding sat down with USLSoccer.com. They discussed the early on & off field success for the club and if expectations had changed since the club had launched.

Father’s Day with FCC-  The club is teaming up with three-time USWNT Olympic gold medalist, and Cincinnati’s own Heather Mitts to give some special dad’s a special night at Nippert Stadium. The club is asking that supporters submit short essays, not to exceed 500 words, explaining why they have the best “soccer dad”. Each winner and their dad will win four (4) complimentary tickets to Saturday’s match against Toronto, and have a chance to meet Heather Mitts for a pitch side photo opportunity. All entries must be received by 9 p.m. Tuesday, June 14th.

UPDATE- Seats Going Fast!!!- Tickets went on sale last week to the general public for the Saturday, July 16th friendly vs. Crystal Palace FC. Early ticket sales have been strong with the Bailey and Zone 1 selling out. Zone 2 is nearly sold out with seats near the corners left. For more information or to purchase tickets for the match you can visit FCC’s page or call 513-977-KICK.

Upcoming Fixture: Home- Saturday, June 18th vs. Toronto FC II @ 7:00 p.m. The club announced Monday that they eclipsed the 10,000 tickets sold mark and expect another big crowd. Tickets can be purchased here or on game day at the Nippert Stadium Box Office.

Tifo Nights– all SG’s will combine to host a matchday prep/tifo design session Wednesday night (6/15) at 2161 Central Avenue at 7:30 p.m. The goal is to honor those who lost their lives in Orlando so if you can come out make sure you do. If you can’t make Wednesday, the groups are meeting at the Eddy (656 East McMillan Street) on Thursday starting at 6 p.m. They will be doing more matchday prep and putting finishing touches on tifos and banners for Saturday.

Die Innenstadt– will meet at Mecklenburg Gardens starting at 3 p.m. with the march starting around 5:40 p.m. to Nippert Stadium. Drink specials available for FC Cincinnati fans.

Queen City Firm- will meet at Mio’s Pizzeria and Pub on 2634 Vine St. in Clifton at 3:00. They are new to the SG scene and welcome all to join as they discuss membership and answer any questions you may have.

Supporter groups meet just outside the Marge Schott baseball stadium in the UC Athletic Complex around 6:10 p.m. The supporters will then march into Nippert Stadium to cheer on the Orange & Blue. If you are a casual fan, I would recommend trying to join in the supporters march.