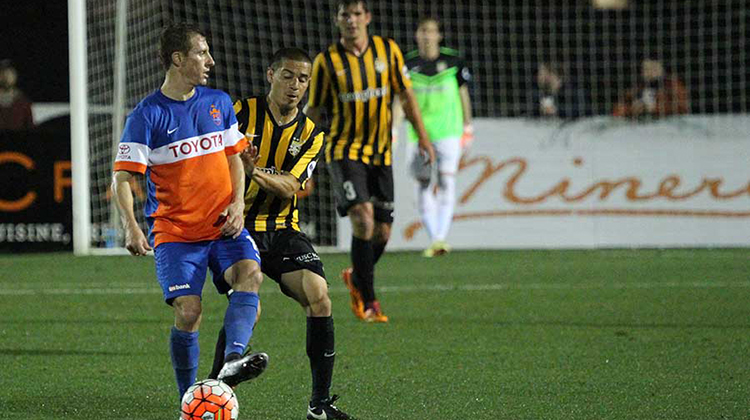 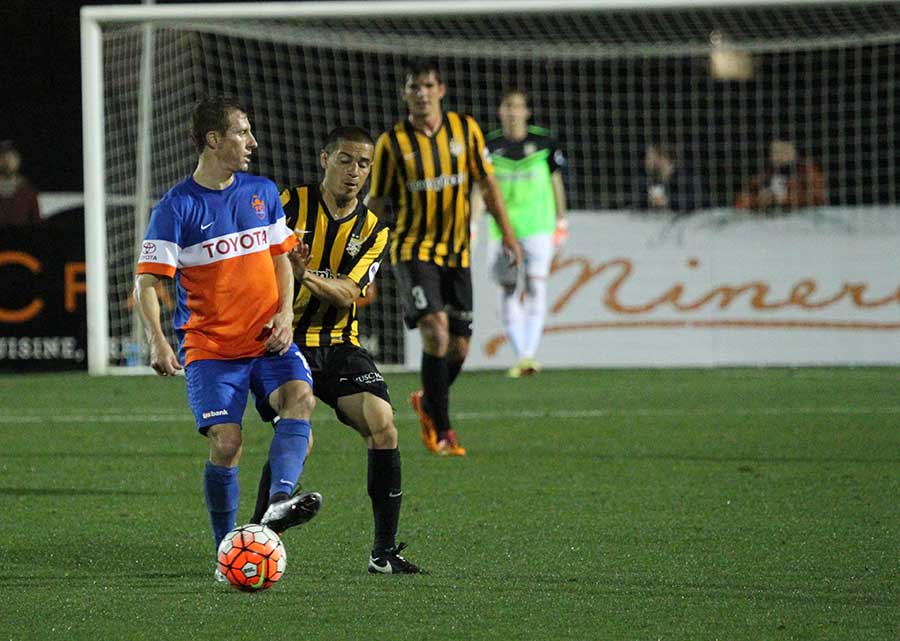 Hello FC Cincinnati supporters. What a whirlwind the last week has been for the club! The season is finally here and the club has been busy getting out new details on how we can interact with and follow the club for their inaugural season. This week we will recap the opening game vs. the Charleston Battery, a recently announced TV deal, the club’s newest piece of silverware to claim, and talk about how you can meet the players at the Rhinegeist Thursday night.

FC Cincinnati Heartbreak in the Palmetto State – After a 45 minute rain delay on Saturday night, FC Cincinnati took to a soggy field for the clubs inaugural game in the USL. Coach John Harkes opened the season with a 4-3-3 formation led by team captain Austin Berry at Center Back. After a scoreless 45 minutes, fellow CB Harrison Delbridge was substituted for Paul Nicholson after what looked to be lower back injury. The second half looked like much of the first half where FC Cincinnati controlled the possession but was unable to find their scoring touch in the final third. With seemingly a 0-0 draw in hand, late Battery sub Romario Williams streaked down the left hand side of the pitch in the 4th minute of stoppage time and struck a low shot from a tight angle just past FC Cincinnati goalkeeper Mitch Hildebrandt for a last second 1-0 Battery win.

USL Update: 11 Things We Learned: 13 games were played in the opening weekend on the 2016 season. We saw 3 late game winning strikes, 27 goals, and thousands of fans excited to see their teams kick off the new season. 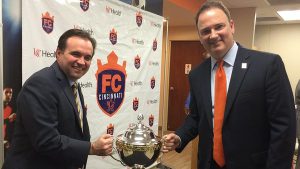 Queen City Cup – On Wednesday March 23rd, FC Cincinnati along with Mayor John Cranley announced the Queen City Cup against the Charlotte Independence. Why the Queen City Cup? Charlotte took on the nickname of “Queen City” when the city’s resident Charlotte of Mecklenburg-Strelitz was married to King George III of England a year before the city’s founding. The first match of the cup kicks off on April 9th when FC Cincinnati faces Charlotte in the home opener. The losing mayor will have to participate at a charity event where they will serve lunch at a homeless shelter in the opposing teams jersey.

Soccer on TV in Cincinnati – Local soccer will be coming to tri-state area televisions in 2016. Sinclair Broadcasting group will broadcast 15 FC Cincinnati home matches on Local12, STAR 64 and the CW Cincinnati. In addition to being shown on the Sinclair Broadcast Group network, FCC matches will be streamed on the USL YouTube channel and  simulcast on ESPN 1530 through iHeartMedia. Tom Gelehrter will call the play-by-play and will be joined in the box by Kevin McCloskey and Paul Rockwood. Lindsay Patterson, of ESPN1530 fame, will serve as the broadcast team’s sideline reporter.

Meet & Greet @ Rhinegeist Thursday – In anticipation of the home opener on Saturday April 9th, FC Cincinnati is hosting a Meet & Greet for Season Ticket holders and fans at Rhinegeist from 6-8 p.m. A special VIP section will be open to season ticket holders where they will be able to meet players and members of the clubs front office. The event is open to members 18 & up.

Upcoming Fixture: 3 p.m. Sunday April 3 @ Bethlehem Steel – FC Cincinnati will head to Bethlehem Steel this Sunday to take on an expansion franchise owned by the Philadelphia Union. The Steel are coming off a 1-0 win over FC Montreal. Die Innenstadt will once again be at Rhinehaus while The Pride will be at Molly Malones Covington. Make sure to get there early as both places will be filled to the brim!

Don’t forget to subscribe to our podcast Cincinnati Soccer Talk on iTunes or wherever podcasts can be downloaded! On this week’s show we’ll recap the match vs Charleston and look ahead to Round 2 vs Bethlehem Steel.