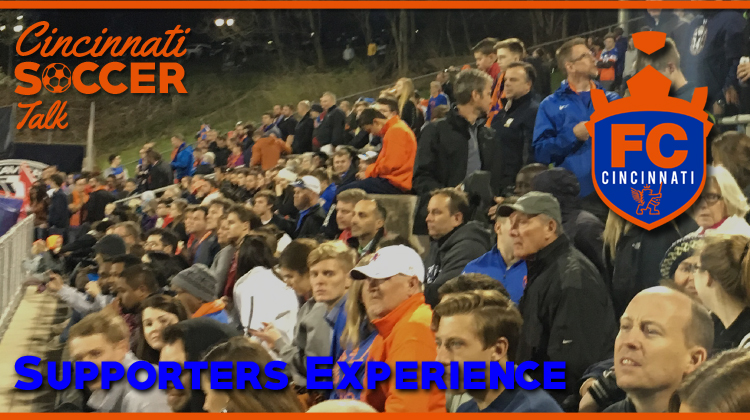 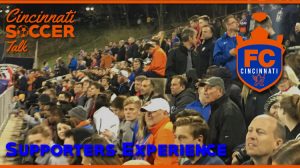 Scores of FC Cincinnati supporters made it down Dana Avenue to the XU Soccer Complex on Friday night, completing the first “March to the Match” in the history of FCC. Leaders of Die Innenstadt (DI), the Pride, and the Den rallied their fellow fans in generating excitement and camaraderie for our hometown club. As the SG’s made it into their seats at the far side of the metal bleachers, they were presented with the first chance to leave their mark on the burgeoning supporters’ culture in Cincinnati.

Just like any new organization, there will be growing pains, but the effort given by this group of individuals was extraordinary. “I think we feed off each other, and just start shouting things out at random and see what sticks” stated supporter Blake Lane (@jblakelane). “Definitely the players inspire us, what they’re doing, what their names are, how their performing and also our roots in Cincinnati.” A chant created by Blake and his fellow FCC Supporters Group members fulfilled these qualities.

“Feel the rhythm, feel the rhyme, get on up, it’s Omar time. Ooooomar Cummings!” themed after the Jamaican forward. 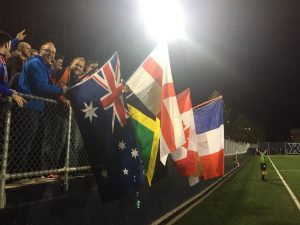 Not to be missed was the pageantry of the fans including flags for all the countries of Orange and Blue players. Even though this game was a first for several fans in the area, some will be contributing their knowledge from past experiences. Claire Hughes (@_ms_daisy) one of the flag makers, lived “in Indianapolis when the Indy Eleven started” but has recently moved back to the Queen City. “When I heard FC Cincy was starting and the kind of ownership and ambitions they have, I thought it would be very fun. A couple of my friends are into soccer to and we all decided to support them.”

Other supporters have been around the game for quite a while. Rob Johnson(@TheRealRLJ3) has a history of playing soccer while in high school, but has been trying to find the right way to connect with the sport he loves. “The city has always supported soccer but never had a true pro team.” Rob pointed out a contributing factor to him getting involved, was the dedication that the club has with the city moving forward. “When they announced that they were going to have a (USL) team and were going to stay, I was like this is something that I could get heavily involved in.”

Some fans wanted to make their support of the club a family affair. Jack and Ruth Frederick had kids that grew up playing the game. “All my kids played soccer growing up and there never really was a team here. We have been going up to Columbus Crew, so it is really good to have a local team here. I just love the sport and am really glad the team here is in town.” The Frederick’s have 9 season tickets and hope to also connect with the club outside of games. “My son works with some of the guys who started the Pride and then we went down to Molly Malone’s one time and we wanted to join. So we signed up!” 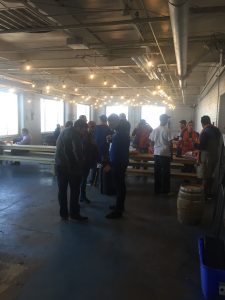 Not to be overshadowed, is the support the club will need from the local colleges and universities. Elizabeth Lowrance Adams has been a soccer fan since the 2002 World Cup when she experienced the event while in Korea. “When I moved here to Cincinnati a couple of years ago to go to school at UC I just wanted to do sports stuff, but they are very expensive.” Elizabeth used to attend Crew SC games as well but once FCC was announced she said, “Sign me up! It will be totally fun so we got season tickets. We are sitting in our student section (The Legion).”

Elizabeth and her friends are going to use the local surroundings around Nippert Stadium and are going to make a whole day of it. “We have friends that have season tickets too and we are going to go to wherever they (FCC) have anything.” Her group was a part of the pregame event at Listermann Brewing Company. “It is about being with my friends and tailgating, having parties, being around a lot of people, the crowds, and the excitement. For me that’s what it’s all about. I like the opportunity and I like the venue.”

The club has worked with the SG’s to succeed, even by allowing the Bailey (Supporters Section) to be general admission seating. The group of raucous fans had great success with many chants, but there were a few howlers. By my account, it was very interesting to watch the leadership of both the Pride and DI collaborate to find out what worked. Many of the Pride and DI members stayed quite a while after the game to compare what succeeded, failed and how to move forward.

To their credit the group cheered together, experimented, and even may have created a goal-kick chant that could become a staple for the future.

We should thank these leaders, as moving forward they will be the people putting themselves out in front to make everyone’s experience more enjoyable. As someone who was experimenting with chants all night, Blake said “this is something that I had to be a part of, I had to jump on and get into it.” All fans there stated and hoped that we can fill the Bailey, the Legion and Nippert on April 9th.

On Blake’s advice, we encourage FCC supporters to jump on, get in and show Charlotte, the USL and especially Louisville who the best fans are.