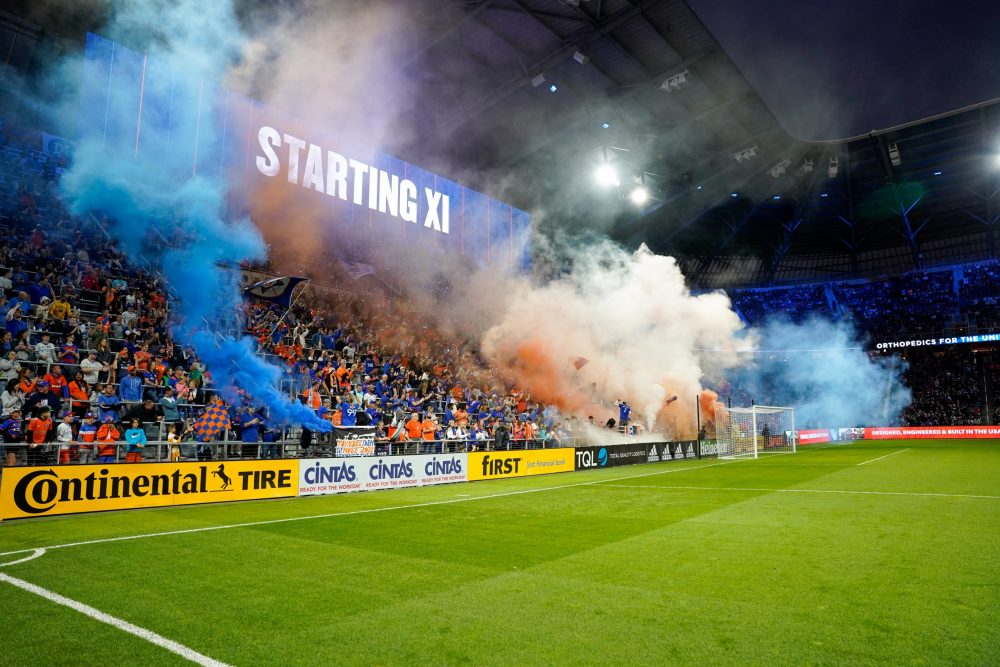 2023 brings big expectations for FC Cincinnati. But there are still questions when looking at the club heading into the preseason.

FC Cincinnati had a tremendous 2022 all things considered and look to be positioned well for 2023. With success come challenges and questions on how can they improve.

Yes, certain players showed well last season, but can they be replaced or improved upon? Below are seven questions or key areas that will shape the early success for FCC. I am not looking too far ahead, but these areas will be should the Orange & Blue fight for the MLS Cup in 2023.

You have seen “sophomore slumps” and other MLS teams flame out after one year of success. What is the standard or expectation for FC Cincinnati in 2023? Some might think this is a silly question, but I think after three years of downright failure and a surge in 2022, what do management and ownership want?

Everyone will always say, championships, but will actions back this up?

Both Brandon Vazquez and Brenner will have clubs bidding for their services in the Winter and Summer. Does FCC agree to sell these players, or are they positioned to hold them for a winter 23/24 sale? I know that this is not an exclusive discussion, but will FCC do everything in its power to win a cup this season? MLS championship windows are noticeably short as the league transitions to selling quality players. Will they do enough to keep the right people around, or do they have plans to immediately replace these players with even higher caliber players?

I think Vazquez will be in Cincinnati all season due to his new contract, but should Brenner move on, what is the replacement?

Going into the 2022 season, FC Cincinnati under Pat Noonan was expected to line up in a 4-4-2 style diamond style similar to the Philadelphia Union. After a defeat to Austin FC to begin the season, Noonan was quick to adapt to the 3-5-2 as the preferred formation.

There are significant nuances with each lineup and the tactics employed. In a more basic discussion, I have questions about how the personnel currently on the roster will dictate what Noonan can use.

FCC can easily return to the 3-5-2 simply due to the personnel returning from last season. The attacking core of Vazquez, Brenner and Acosta return along with the midfield of Moreno, Nwobodo, and potentially Yuya Kubo. The addition of U-22 Marco Angulo makes this group potentially more dangerous in the attack and will give the midfield more top-end depth needed last season should they decide to move forward with a 4-4-2 diamond or 4-2-2-2.

The biggest question and what might dictate the formation will be defensive depth. Center back Geoff Cameron and Tyler Blackett departed this offseason and the only replacements named to date are draft picks Joey Akpunonu and London Aghedo. Noonan could flank Miazga with returners Nick Hagglund and Ian Murphy or through addition, find a permanent pairing next to the former Chelsea player.

The fullback corps is still a bit thin and lacks consistent top-end quality. Left wing-back Alvaro Barreal was tremendous at times but is still learning his position. Can he feature in a more defensive role if needed? Alvas Powell was also solid in his time last season, but I am not sure he is a day-in-day-out left-back. Ray Gaddis is stout defensively, but there are concerns about fitness and pace.

There are positives and negatives to each formation and which personnel FCC will have to rely on. Overall the next month and a half will be exciting to see what additions Chris Albright can make and how this dictates the future style of the Orange and Blue.

Missing Pieces on the Defense:

As we noted in which formation FCC will employ, the back line still needs some work on the personnel front. While many members of that position group played very well in a 5-man back line, the majority of these would not be considered consistent starters on most MLS-cup favorites.

Starting on the left, Barreal returns and should be the expected starter over newcomer Isaiah Foster. The Argentine landed a new contract this offseason so it seems that FCC is putting their trust in the young midfielder turned defender.

On the right, both Gaddis and Powell would be considered top reserve defenders on quality teams, but having to rely on these players every week for 90+ minutes is a risk. Both have glaring deficiencies in their games, however, are quality leaders and locker room personalities.

I think the right back needs to be addressed at some point this season as both Powell and Gaddis have also had injury concerns in the past. Do you go with a lockdown defender who offers some quality going forward to free up Barreal or do you bring in another attacking player who can offer excellent service into the forward group?

The only defender outside of Barreal that is sharpied into the lineup is center-back, Matt Miazga. Hagglund and Murphy had great moments in 2022, but again, are not what most contenders would desire in a four-man back line every week. There is still significant money available in the roster budget and that was evident as Albright pursued former Dallas center-back Matt Hedges.

Look for two if not three additional players to be brought into this group in 2023. It is unlikely that three would be in Cincinnati before the season begins, but certainly a quality CB will be needed early on.

Has FCC done enough to cope with the loss of Lucho Acosta for a stretch of games?:

Outside of the injury to left back Ronald Matarrita early in 2022, FCC escaped the injury bug. Creative playmaker Lucho Acosta is such an important piece of the attack and what should happen if he had to miss significant time? Due to the nature of MLS roster rules, it is impossible to bring a like-for-like player into the squad so most groups have a youngster coming up the ranks or alternative options to create from other positions.

In 2022 Alvaro Barreal was the replacement, but with few options in the back, is it possible Yuya Kubo or newcomer Marco Angulo could push forward? Angulo is well thought of, but certainly not known for purely creative actions.

I think Albright will need to look at a right back to bring in who can create multiple ways. Can several players on the roster jump into the 10 role? Sure, but I think a big tactical adjustment along with one or two new players could minimize Acostas absence should it happen.

BV gone to USMNT camp? Good for other attacking options to log minutes?:

Sadly former(?) USMNT head coach did not select in-form forward Brandon Vazquez for the 2022 FIFA Men’s World Cup. However, if the federation is doing its due diligence, Vazquez will be called into the January camp in California.

I never want one of our players to miss time with the group, but could this be a good thing? Brenner returns and his relationship with Acosta is not in doubt, but goal-less Dom Badji and late arrival Sergio Santos could really use time with the first group to gain familiarity.

The attacking group of Cincinnati is one of the deepest in the league and getting “non-starters” (can’t believe I refer to these two players as such) can only help the dynamism of FCC.

Going into 2022, Alec Kann was named the opening match starter and was expected to have that position on lockdown. An injury and tremendous form from draft pick Roman Celentano changed the expectations.

Noonan has always preached competition in the group and one has to ask, will Celentano be considered the clear favorite to start? His shot stopping and penalty saves were tremendous last season, but his distribution at points was well below average.

Kann is significantly better playing with his feet and should he be 100% fit, is it fair to expect a starting keeper competition this preseason?

Which young players will step up/Stick with the team

Ian Murphy and Celentano had outstanding rookie seasons and Ordonez impressed in short stints and at the U-20 Concacaf Championship. Robledo had a good preseason but spent most of his time with the MLS Next Pro side.

Jimenez has been flirting with signing his MLS deal with FCC after weighing other opportunities in 2022. His addition might not be noticed right away in 2023, but continuous development with FCC2 and opportunities in the Leagues Cup and US Open Cup will give normal starters needed rest. Jimenez is a name to watch out for.

Pinto is a former Princeton Tiger who spent time with the FCC Academy in 2020 and the past summers. The talented midfielder was thought of well amongst academy personnel and will likely again be a good addition for the MLS Next side. If his creative tendencies improve he could make spot impacts with the MLS club.

Isaiah Foster is the name I am the most excited to see. Alvaro Barreal is a good left wing back, but Foster could be the long term solution should the Argentine move on. Foster went the professional route instead of college, signing with the Colorado Springs Switchbacks. His development in the USL got him looks abroad and within MLS. FCC won his signature recently and I think of the new players, he will have the most minutes by the end of the year of the group.