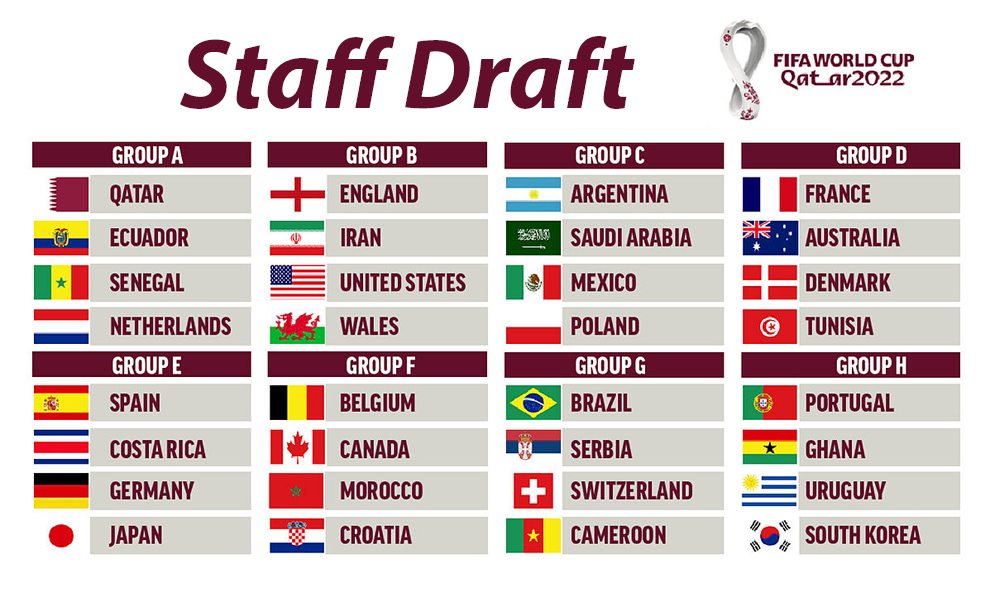 While much of the lead up to the 2022 FIFA Men’s World Cup has been focused on off-the-field issues, our staff wanted to focus on the play itself. The World Cup is one of the best footballing tournaments every four years, filled with many great narratives and on-field moments of brilliance.

What better exercise in the build up to the tournament is there to prognosticate on results, who could over-perform and who could bounce out early.

After the “random” pick generation fulfilled by Nate, the stats guru himself was drawn first in the snake draft format. He “claims” to have performed the picks on the up-and-up but several of the CST vets have their doubts.

Tournament Odds favorites Brazil (+350) and Argentina (+550) went off the board with the first two picks followed by defending champion France who has been hampered by injury. Robert surprised the group by picking 12th favorite, but 2018 runner-up Croatia with the 4th pick. The rest of the round played out with Group-of-Death group mates Spain and Germany coming off the board early. These were followed by Cristiano Ronaldo’s Portugal and World #2 Belgium. What was the group thinking not electing to draft England in the first round?

Geoff capitalizes with the first pick  of round 2 by drafting the Netherlands which might have the easiest draw to the quarterfinals should they win the group. Coach Gough broke Bryan’s heart by snatching England, but the ginger rebounded quickly by nabbing world #10 and tenth betting favorite Denmark who lost to England in last years Euro semi-final. The “are-we-for-real” picks happened in a fury with Uruguay, Poland and Senegal picked mid-round. All three of these teams have the ability, but also have big questions about their sides including how Senegal will fare without Sadio Mane. Tim nabbed the Yanks late in the round followed by Switzerland who has a favorable Group G draw.

Group-of-Death side Japan was picked by Nate to lead off the round followed by Concacaf sides Mexico and Canada. Will Mexico make history this year by not advancing out of the group or will they finally win a round of 16 match and become immortals in their homeland? Dark horse Serbia was picked by Robert, with Boston selecting the USA’s opening match foe Wales. Bryan picked South Korea, because in a land famous for bribery, they have a shot in a middling Group H. Soon to be Cincinnati’s second favorite side, Marco Angulo‘s Ecuador and dark horse Morocco ended the round. While Morocco was poor in a friendly vs. the USA in Cincinnati, Hakim Ziyech returns to the squad and could reward Geoff with the best value in the draft.

Of course Geoff follows his premium value pick by selecting host and WC debutant Qatar who will likely bounce out in a relatively easy group A. African countries Tunisia, Ghana and world #38 Cameroon were selected in succession following. Ghana comes in ranked 60th in the world, with the Black Stars are the youngest team in the field and have some experience in Jordan and Andre Ayew but the rest of the team with practically none! Concacaf’s fourth team and Ronald Matarrita’s Costa Rica was selected by Robert followed with group B’s Iran, the Socceroos of Australia and final pick Saudi Arabia.

What do you think of the pick and who has the strongest group?

Coach Gough: England has to be one of the challengers to lift the cup. Their group should be pretty straight forward, with only the mighty Americans as a real threat to finishing tops… and is that threat actually real? They have one of the best strikers in the world in Harry Kane, creativity in all the right places, and should be very good on set pieces. After reaching the semi-finals in Russia four years ago, then the finals of the Euros in 2021, the team is poised to make a run at bringing football home in Qatar in 2022.

My group doesn’t include any top tournament favorites, but in Portugal and England I have 2 of the “best of the rest” teams. Add in an exciting Ecuador squad and a complete unknown in Tunisia, and my group should be fun to watch.

Robert Ziegler: Croatia at this point is every bit the contender the traditional major powers are. Luka Modric is still one of the best midfielders in the world. Serbia and Poland both have good chances to advance, and Costa Rica can be a sleeper if Germany lays an egg. Experience wins titles.

Justin Blair: France will look to do something that hasn’t been done since 1962, repeat as World Cup champions. In 2018 France fielded the second youngest group of the tournament with an average age of 26. This go around, Les Bleus comes in with a similarly young group. Average age being 26.5. Veterans like 2022 Ballon d’Or winner Karim Benzema and the ever dazzling Kylian Mbappe look lead a French group back atop soccer’s most coveted tournament.

France are a shoo-in to top Group D. Tunisia, Denmark and Australia round off that group.

Senegal is the darling for the soccer community. A lot of speed and skill on the pitch for the Senegalese. At the top of the CONCACAF table is Canada. This team has lifted Canada back into the World Cup for only the second time in it’s history (Last 1986). Iran is a mystery in a group filled with EPL talent. With an aging group and political turmoil surrounding this team, it’ll likely be an early exit for them.

Tim Bredemeier: Messi has a date with destiny in what is likely his last World Cup. He’s the feel good story and part of what may be one of the best Argentina squads in recent years. They’re fresh off of a Copa America win in which they already defeated World Cup favorite Brazil 1-0.

The United States pick is the Yankee in me saying “I believe that we will win”. Plus the “vibes” within the squad are supposedly “top tier” according to those on the inside and Tim Weah has curated a viral USMNT World Cup hype playlist on Spotify to get the boys ready before every match. For my third pick I referred to Landon Donovan who once said “My other team is Mexico”. Love him or hate him, Memo Ochoa is on the plane and ready to perform at his heightened World Cup level. Speaking of keepers, who knows what the Socceroos have up their sleeve? The penalty kick madness employed by Andrew Redmayne in qualifying could carry over to the big stage. Anything can happen right?

Geoff Tebbetts: I’m kinda shocked people didn’t opt for Belgium, who have improved over the past two World Cup cycles after not qualifying in 2006 and 2010. Kevin De Bruyne is at the peak of his prime, and goalkeeper Thibaut Courtois snuffed out Liverpool’s Champions League title aspirations singlehandedly back in May. This is the best and last opportunity for Belgium’s “Golden Generation” to win it all, so why ignore that?

The other three picks were, to be fair, wasted. I made the grandest mistake of all and failed to distribute my picks well. Then again, the Netherlands should get to play a weak runner-up from Group B in the knockout stage. Hell, Morocco could stun Canada and Croatia if I play my cards right.

But if I’m lacking that much confidence in my ability, why not play the bad guy and see how far the rigged rabbit hole goes? Give me Qatar and their funny money to get as far as possible so I can be left laughing like an overconfident Bond villain in this draft.

Nate Gilman: When the draft generator spat out my name at the top of the list, there was only one pick in my mind: Brazil. Not only are the Seleção one of the betting favorites to win, they should be a ton of fun to watch in that pursuit. Tite brought nine attackers to the tournament so hopefully goals will be plentiful. Switzerland and Japan are in tough groups but could both surprise and advance to the round of 16. As for Saudi Arabia, well, the random number generator giveth and taketh away, I guess.

Bryan Weigel: I may have reached with Germany as my first round pick but Hansi Flick’s side look to have a bit of an edge in looking to regain their place as a prominent side in the world’s game. While I was devastated that Coach snaked England, I am bullish on Denmark. Christian Eriksen and Co. boast a tremendous amount of experience and showed that they could play through adversity in last Summer’s Euros.

The Taeguk Warriors are the first country outside Europe and South America to reach 10 consecutive World Cup finals and with the masked Son Heung-Min declared fit, this team could make a run. Ghana is a mystery. Most sides rely on experience and while Ghana has little of it. Don’t know if that is a bad thing as they did dismantle Switzerland in a friendly this week.