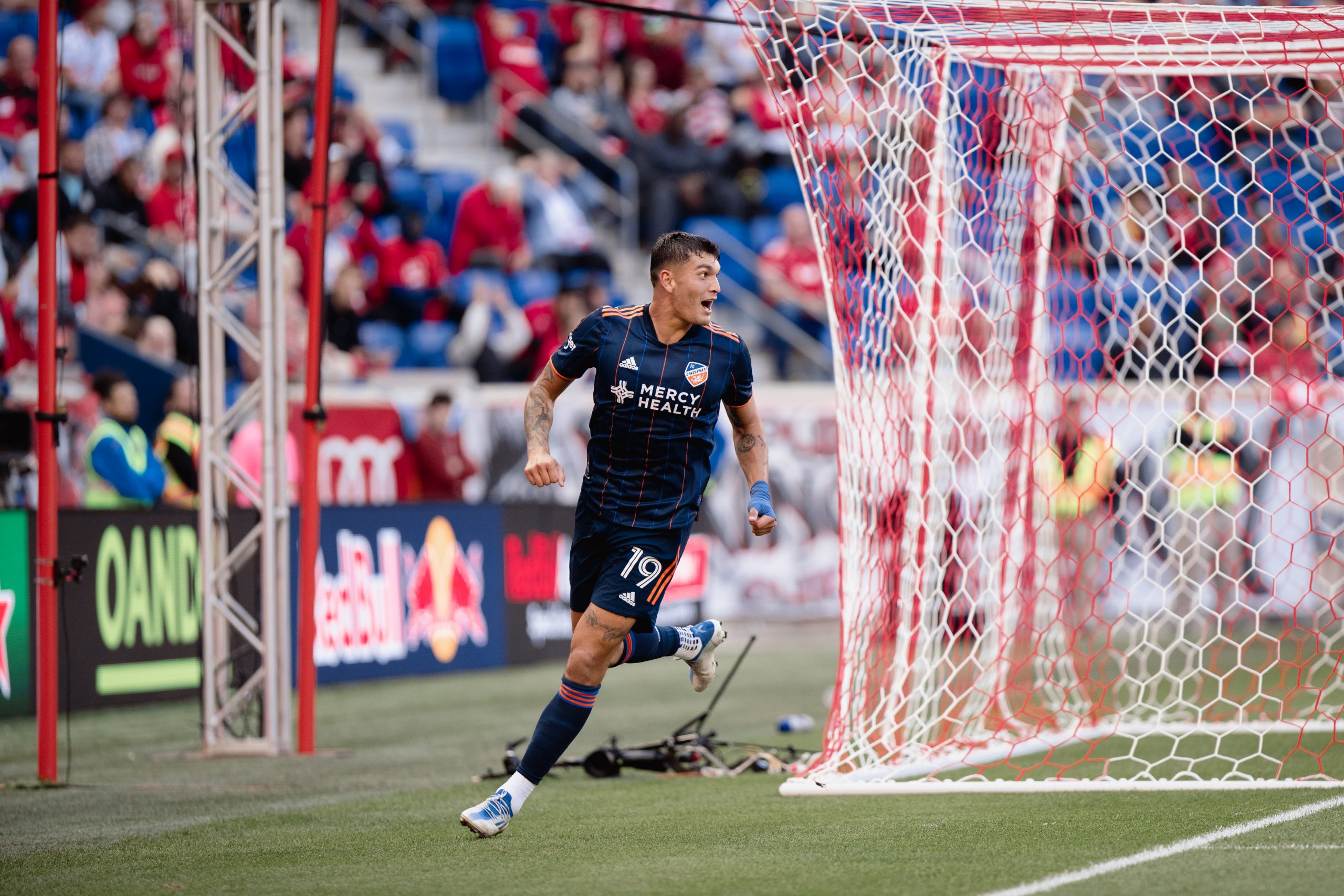 FC Cincinnati is headed to the Eastern Conference semi-finals after a thrilling 2-1 win against the New York Red Bulls on Saturday afternoon. 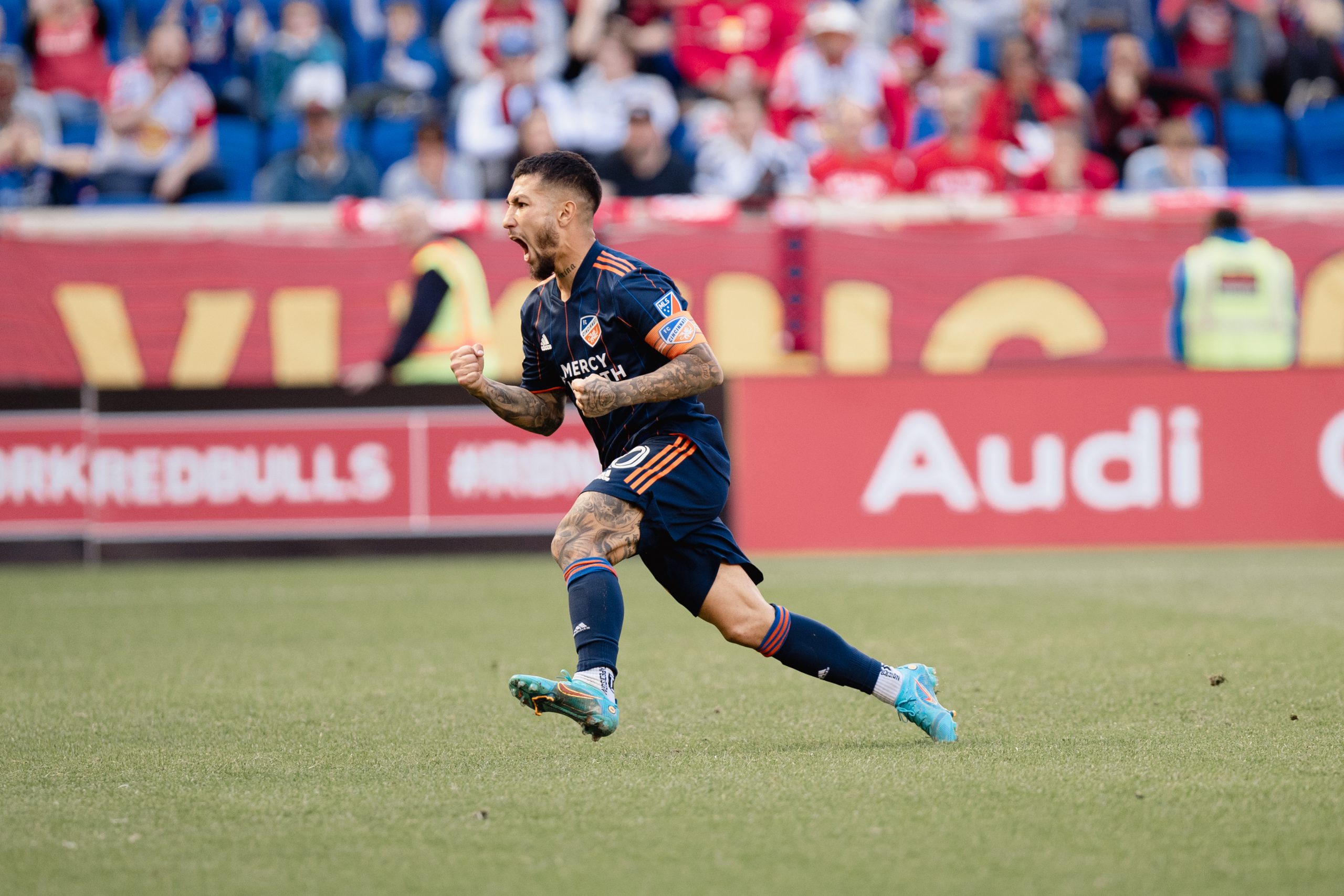 HARRISON, N.J. — FC Cincinnati is headed to the Eastern Conference semi-finals after a thrilling 2-1 win against the New York Red Bulls on Saturday afternoon. Despite going behind in the 48th minute courtesy of a Lewis Morgan golazo, the Orange and Blue rallied courtesy of a penalty scored by Lucho Acosta in the 74th minute and Brandon Vazquez’s winner in the 86th minute.

FCC came out in the 3-5-2 that has become Pat Noonan’s go-to lineup while NYRB countered with a 4-2-3-1 instead of the 3-4-3 seen in recent matches. After a relatively even start to the game with some promising sequences for both teams, the Red Bulls’ pressure in midfield started to have more and more success, muddying the game and preventing the Orange and Blue from finding the attacking trio of Brenner, Vazquez, and Acosta.

Lewis Morgan’s volleyed goal early in the second half changed the complexion of the game. After an initial clearance of an attack from a long throw-in, Morgan had too much time at the top of the box and his strike ended up in the top corner of Roman Celentano’s goal.

Despite going behind on the road in the club’s first MLS playoff game, FCC manager Pat Noonan said in the post-game press conference, “in a strange way, I think the goal helped us to play a little bit and try to attack with the ball on the ground at times.”

FCC seemed to have an equalizer through a Junior Moreno volley from outside the box but it was ruled out for offsides. Instead of becoming another one of those games where VAR played a huge role, FCC flipped the script.

Two substitutions made huge differences in the second half. Sergio Santos and Yuya Kubo replaced Brenner and Junior Moreno in the 66th minute. Kubo’s pass in the 72nd minute opened up the Red Bulls defensively, starting the sequence culminating in Alvaro Barreal’s drawn penalty. Acosta calmly converted the spot kick and FCC were level.  to find Santos’ pace was a constant threat to the Red Bulls’ backline.

Leading up to the PK… my goodness, what a ball from Yuya Kubo to spread the field. pic.twitter.com/lD55fzey0S

Santos’ pace, which put Red Bulls’ defenders on their heels on multiple occasions, led to Brandon Vazquez’s game-winner. He latched on to a pass from Obi Nwobodo, held off his defender, and found Vazquez in the center of the box who made no mistake, coolly slotting the ball past Carlos Coronel.

After the game when asked about his, Vazquez said, “those are the moments you live off of, so as soon as I can smell that there’s an opportunity, I’m giving my all, like I said those are the moments I wait for all game and Sergio powered through that center back and gave me the perfect pass.” Like so many times this year, Vazquez found a step on a defender or just the right amount of space and the Orange and Blue were ahead.

Though tempers flared more than once, most notably in the first half when Matt Miazga and Luquinhas got tangled up following an off target shot by the Red Bulls’ player, FCC players kept their collective cool. Miazga was cautioned after the first-half incident but didn’t look in danger of picking up another for the rest of the match.

In the post-game press conference, FCC manager Pat Noonan said, “I think those two games helped to prepare our guys in a better for what they’re going to see…because there was certainly moments in that home matchup where we lost our composure, and I think we grew from that in the second game that we played.” He continued, “two regular season games helped us deal with a playoff game with the ramped up intensity with a small margin for error and having a better mentality and dealing with players being down, 50/50s, yellow cards.”

Those experiences in a season filled with dramatic calls and moments surely prepared the Orange and Blue for the 12 added minutes at the end of the match. FCC saw the match out in relatively easy fashion, though Celentano was called upon to make a few saves.

And now FCC is on to Philadelphia to face the Union in the Eastern Conference semi-finals.