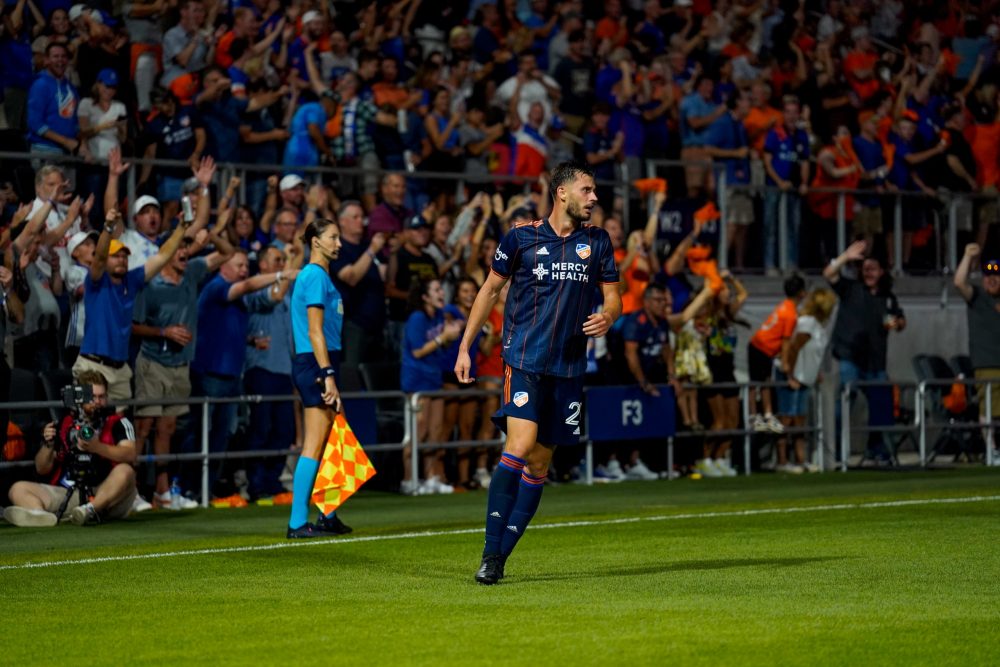 FC Cincinnati drop points with only one match left

FC Cincinnati decided to have one of its worst matches all season in a match against Chicago Fire FC. Losing 3-2 against a side that was already out of the playoff race. This loss, alongside wins from Miami and Columbus, puts FCC at risk of missing out on the playoffs after having multiple chances of getting close to clinching position.

The first half opened with FCC controlling the ball and getting a couple of chances. Brenner and Brandon Vazquez both saw a glimpse at goal early, but neither were able to really test former FCC GK, Spencer Richey.

This continued for around the first 15 minutes, but after that point, Chicago also started to grow into the match. Following that point, the opposition even seemed to be playing better. They were getting in decent positions and were able to test the defense inside the box.

After about 30 minutes, however, FCC returned to the forefront and started to attack the Chicago goal. FCC had multiple chances that it probably should have gotten closer to the goal, or even scored. The team’s chance creation was alright, but its finishing skills and ability to turn those chances into shots were atrocious.

Now, the second half was where everything fell apart. After a little bit of attack from FCC, Chicago started to boss the home team and looked like the ones looking to clinch a playoff spot after swift attacking on counters.

Jhon Durán played the star for the match, as the youngster got the opening goal of the match. But, FCC didn’t appear to notice, as it played as nervous and scared as before, allowing Brian Gutierrez to double Chicago’s lead thanks to a great shot.

Following this barrage from Chicago, FCC looked to pick up the pace a tiny bit, but, of course, that didn’t bring any changes to the scoreline because the finishing was atrocious up to this point.

Durán wasn’t counted in this statement, as after a little bit of FCC attack, a Chicago counterattack that left the forward wide open led to him chipping Roman Celentano which easily fell into the net to go up 3 to 0.

Now, when the side was down 3 to 0, was when FCC really started to put on the pressure. Almost immediately following the team’s pressure, it tallied its first goal of the match thanks to a Lucho Acosta goal that maybe rightfully could have been called offsides.

After this goal, FCC continued its attack but was only able to get corner kicks, which the team is notoriously bad at in my opinion. But, Brandon Vazquez wasn’t done working. Obinna Nwobodo sent him the ball, where Vazquez then set it down and slotted the ball into the back of the net.

However, after this, the match basically went entirely how Chicago wanted. Chicago had the ball for the first half of stoppage time, and then halfway through, it appeared like Rafael Czichos initiated head contact on Alvaro Barreal. This started a fight, with Sergio Santos flying in and getting into it. But, Santos was the one to pick up a red card, while Czichos only got a yellow. This play basically ended the match, with Chicago laughing to three worthless points, while FCC now looking at other teams to help them in the standings.