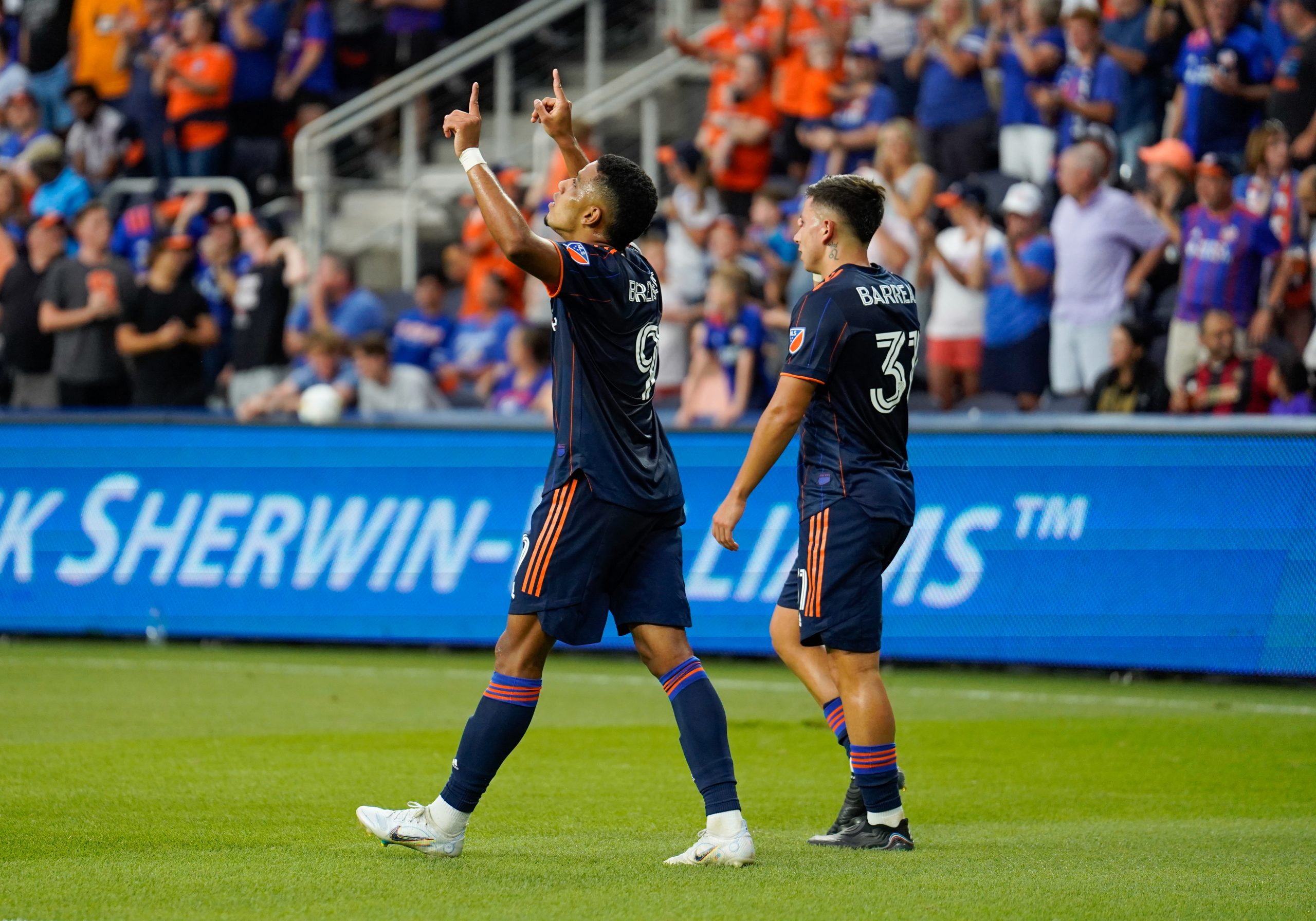 FC Cincinnati’s 6-0 win over the San Jose Earthquakes didn’t always look like it’d end that way. After a solid start to the game, FCC weathered a shaky end to the first half thanks to some quality goalkeeping from Roman Celentano. When Álvaro Barreal opened the scoring right before half-time and the Orange and Blue never looked back, scoring five second-half goals. Though Brenner scored FCC’s fifth and sixth goals, completing his hat-trick, after the 90th minute, the game was effectively over when Lucho Acosta converted his penalty in the 72nd minute to make the score 3-0.

Even without the two penalties, FCC put together a solid match in terms of chance creation. According to Football Reference, the Orange and Blue created 2.5 non-penalty expected goals. San Jose mustered just 0.7 xG against FCC’s defense on 9 shots with all but one coming in the first half. Celentano was forced into five saves, a few of them acrobatic, but San Jose took just three shots inside the 18-yard-box.

San Jose isn’t exactly a good team in 2022, as they sit in last place in the Western Conference. But after a second half of the season seemingly defined by not putting away teams or closing out games, FCC’s performance on Saturday is a good sign for the remainder of the season. The Orange and Blue overcame a not-particularly-inspiring first half to make a statement to its playoff competitors in the second.

After dealing with injuries and forced absences due to suspension, FC Cincinnati is as healthy as its been. On Saturday, Sergio Santos and Yuya Kubo both came off the bench to make major contributions. Rónald Matarrita made his second appearance is as many games as he works his way back to full fitness following his early season ankle injury. Dom Badji also made a late game appearance, adding to the striker depth available to Pat Noonan.

Santos’ pace and skill on the ball give Noonan another option to attack tired defenders late in the match. His ability has been on display in the last two games, drawing a red card and nearly a penalty against NYCFC and an actual penalty against San Jose. Yuya Kubo has been a revelation off the bench lately, too. Not only did he score against San Jose, he showed his versatility in midfield, playing as the 10 and then as one of the holding midfielders later.

Matarrita’s return gives Noonan flexibility at the end of matches, to either replace Barreal directly without losing much going forward or to push Barreal higher to chase a result. However Noonan opts to use his bench going forward, this is the healthiest FCC has been this season, and just time for the final push for the playoffs.

Barreal’s opening goal changed the match and set the stage for FCC’s second-half rout. What he can do going forward will likely always be Barreal’s strength on the field, especially playing as a wing-back. But on Saturday, he contributed in myriad ways. He led the Orange and Blue in pressures and chipped in with one interception and one tackle. He might not be the most efficient defender or be in the right position all the time but his work rate makes up for a lot.

I wanted to draw attention to one sequence involving Barreal in the second half. It didn’t lead to anything but demonstrated the flexibility his technical ability and creativity give FCC going forward. 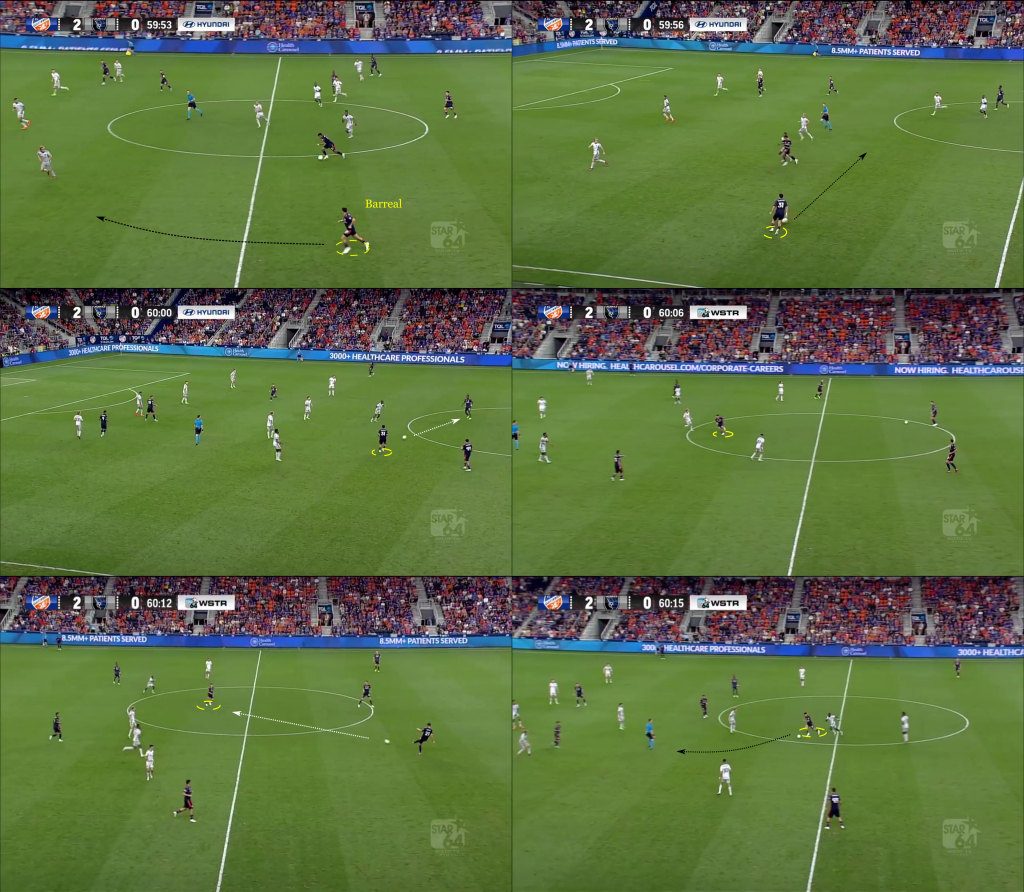 Barreal starts out on the left wing, wide of Brenner who is driving forward with the ball just before the midfield line. As Brenner is closed down by a defender, he lays the ball off to Barreal, who cuts infield on the dribble. Confronted by a compact San Jose midfield, Barreal plays the ball horizontally to Obi Nwobodo. Nwobodo plays the ball backward, with it ultimately ending up at Geoff Cameron’s feet. Barreal, still central, looks to get back out wide only to be told by Junior Moreno, who is occupying the spot where a left wingback might normally be, to stay where he is.

Barreal is occupying a deep-lying midfield role. He finds space to receive the ball, and looking more like an attacking midfielder or winger, turns the closing down defender and pushes the ball into space, driving FCC forward again. Again, this sequence didn’t lead to any danger. I’m just pointing it out to show the different options FCC has going forward with a player as comfortable in possession as Barreal playing left wingback.

One last sequence that caught my eye on Saturday. It should be noted that San Jose was already down 4-0 at this point so the defensive intensity might not have been as high as it was earlier in the match. Right before the screenshots start, FCC had been trying to work the ball up the right sideline, with little success. Though there was little joy on that side, it did suck most of the Earthquakes’ defenders to that side. A relatively simple pass is played back to Geoff Cameron in the middle of the back three who then plays a simple sideways ball to Ian Murphy. 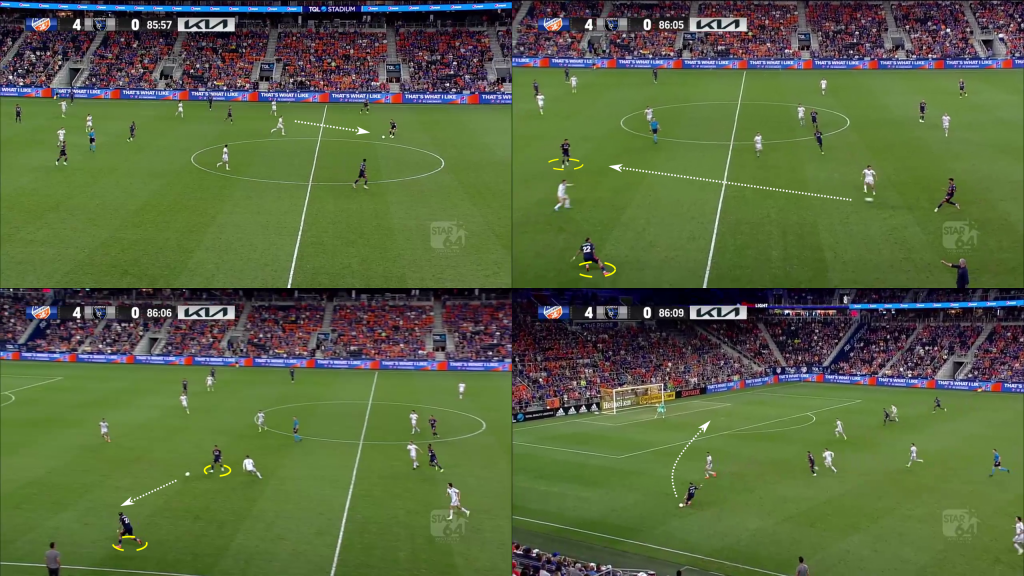 Because the San Jose defense had been tilted so heavily to the sideline and was also trying to push up as the ball went backward, even just the simple switch from Cameron to Murphy left one Earthquakes defender to account for both Matarrita and Brenner. Murphy found Brenner who played a one-touch pass to Matarrita on the left wing. Though Matarrita couldn’t find the right cross, just look at the advantageous situation near the box. Three FCC attackers were running at three San Jose defenders. Just by moving the ball backward and horizontally, the Orange and Blue created an opportunity for a chance in transition.