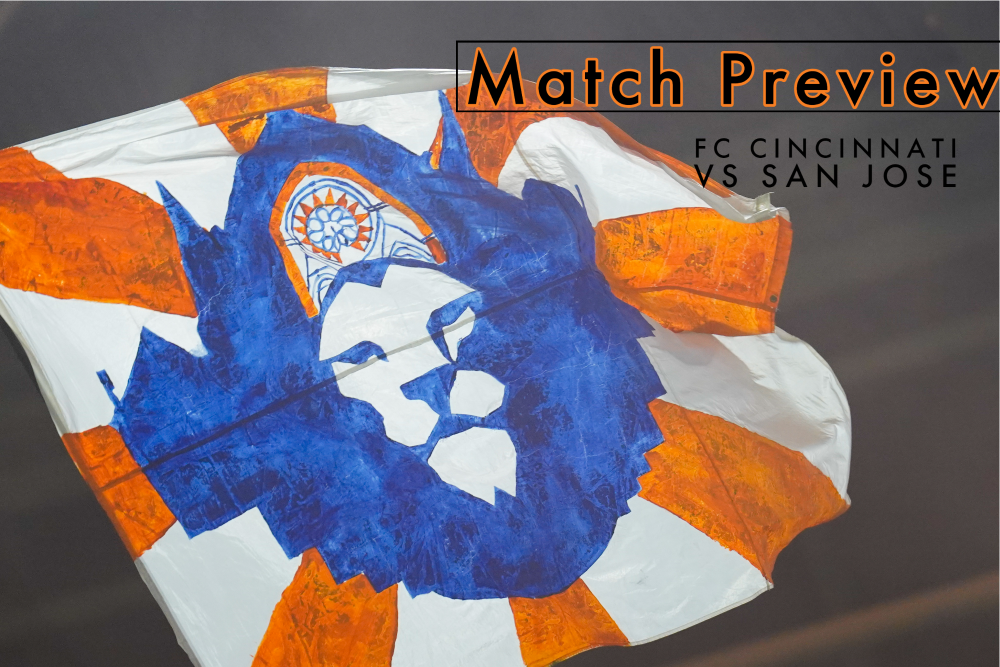 Fans have these points penciled in. Up to FC Cincinnati to grab them.

It’s strange to say about a team has risen above expectations in such a dramatic way this season, but Saturday night at TQL Stadium, the home side can leave no room for moral victories. Winning is required.

Right or wrong, every projection of the stretch run that has FC Cincinnati reaching the playoffs with a top 7 Eastern Conference finish, includes the Orange and Blue getting all 3 points vs. Western Conference visitors San Jose Earthquakes.

San Jose has struggled this year, sitting next to last in the conference standings with 7 wins and 30 points. They’ve won two of their past three matches but Pat Noonan and FCC have to see 3 points as an absolute necessity. Cincinnati currently occupies the 7th and final playoff position in the East, but with five remaining matches in the regular season, playing San Jose at home may be the most enticing opportunity at three points remaining, even with matches vs. DC United and Chicago Fire also remaining on the schedule.

FCC will welcome the return of Luciano Acosta in his attacking midfield role, following a one-game yellow card suspension served midweek at New York City FC. The rest of the squad is also available for selection, including left back Ronald Matarrita who returned to action as a substitute Wednesday following five months out injured.

Noonan rotated his lineup for the midweek game, meaning right back Alvas Powell, center back Geoff Cameron, and forward Brenner getting part or all of the game off, along with Acosta. All hands will need to be on deck for this match however as there’s just too much riding on it. The club also knows exactly where they are at the table per Coach Noonan, “I think they sense it. Each week, each game that passes and where we’re at, I’ve said multiple times, where we’re at in the table is something that they’re aware of. And I think while the performance wasn’t great against New York City, it was an important point as far as where we’re positioned right now and with games remaining. It’s in our hands, and we have a chance tomorrow to step on the field and get an important win.”

San Jose is led by forward Jeremy Ebobisse who has scored 15 goals this season. The chief playmaker is Argentine midfielder Cristian Espinoza, with 12 assists thus far. Other regulars in the starting lineup include midfielder Jackson Yueill, defenders Tanner Beason and Paul Marie, and goalkeeper JT Marcinkowski.

The Earthquakes have displayed a fairly potent attack, with 44 goals out of 30 matches. But interim coach Alex Covelo’s side has also conceded 55 goals, most in the Western Conference.