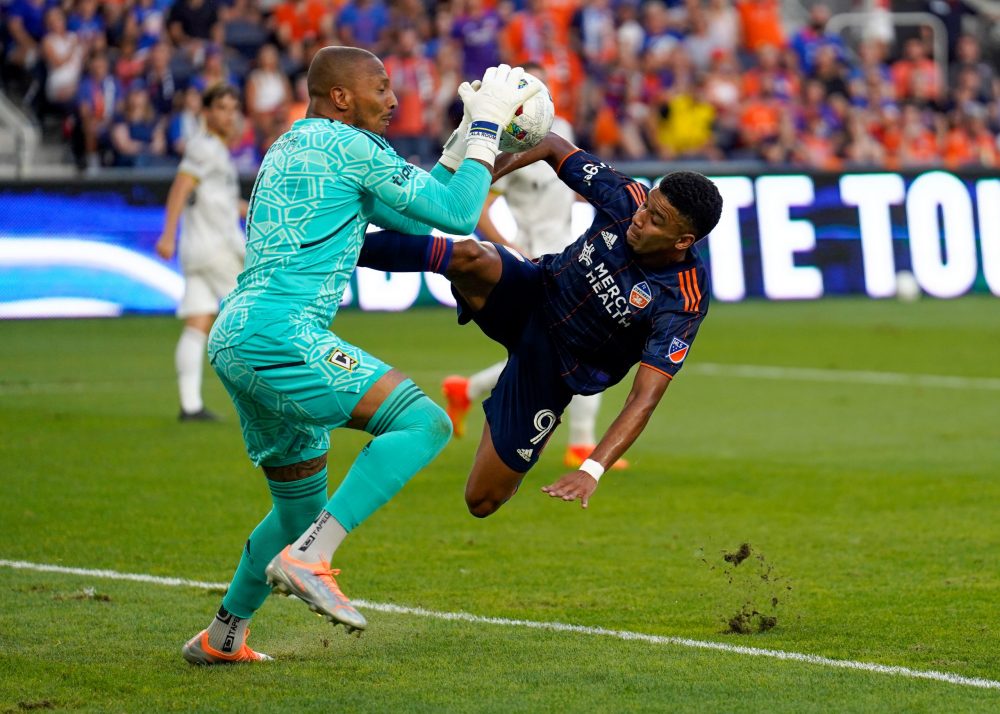 Controversies headlined the second Hell is Real Derby, as FC Cincinnati and Columbus Crew SC played to a 2-2 draw.

However, the match didn’t start that way. It started with both sides looking aggressive. They didn’t seem to worry much about conceding, with both wanting to impose their will on the other.

FCC did, however, seem to be the more energetic team, with a lot more ideas and space to work in the midfield.

Lucho Acosta is fully back from his multi-game suspension and is MVP-worthy. The number of passes that open up an attack or spring forward a run is unreal. He has shown why FCC put its faith in him as the cornerstone of the franchise last season.

This is especially with the addition of in-form Brenner and Brandon Vazquez, the latter of which seems destined for time with a national team, whether that is the U.S., Mexico, or Qatar. Both of these players did splendidly in the first half of this match.

Vazquez, mostly, put on a clinic on how to play the straight no. 9 role. His hold-up play was great and allowed Barreal and Acosta to come forward, opening up the attack.

Brenner, on the other hand, showed the new striker style, helping to facilitate play, and play Acosta the ball where he would then give others the ball.

FCC has found a great striker partnership not just because the two have played well, but because they are so completely different, but somehow also mesh so well together.

Much of this first half was just attacking from FCC, but that didn’t mean there wasn’t some defending, because there was.

Obinna Nwobodo being out, I was worried Columbus would run riot on the FCC midfield, but Yuya Kubo did a good job in the first half congesting their attack and not allowing great runs to be completed.

As the first half continued, it started to feel like FCC was hitting a wall with its attack. The team was getting close but wasn’t doing enough to get that real chance. However, that did come eventually and Vazquez was on the end of it. But he didn’t slot it in the back of the net. He missed an absolute sitter, which seemed to deflate onlookers.

But a great striker forgets and moves on, and that’s what Vazquez did. In the 36th minute, Acosta picked up the ball in the middle of the field and saw Vazquez making a run. Acosta nutmegged the defender, with the ball then going to Vazquez, who continued his run and slotted the ball near post, which gave FCC the lead.

The remainder of the half was a lot of nervy Columbus attack, as it felt like the opposition was getting close to equalizing, but that didn’t end up happening.

The second half began very similarly to the first, with both sides continuing to want to attack in droves.

Columbus, however, certainly had much better spells compared to the first half. Lucas Zelerayan had the opportunity multiple times to set up a set-piece attack, but nothing came of them.

Then, in the 74th minute, Columbus looked to equalize thanks to a goal from Derrick Etienne, Jr. But, on further looks, he was easily offsides. It couldn’t be argued. However, VAR decided to not take a look at the play, and the goal stood even though it shouldn’t have. This play is one of the most egregious calls I’ve ever seen and throws everything PRO referees and VAR does in doubt.

Following this play, FCC and the whole stadium were mad at the referees and took it out on Columbus. That anger translated into intense pressure on the Columbus goal and eventually, a goal. Matt Miazga got the ball inside the box following a cross and hit it into the back of the net.

The rest of the match started to seem like a one-way road, with Columbus attacking the FCC goal, and FCC punting the ball away. But, that rhythm subsided for one small moment thanks to Sergio Santos, who played the ball to Dominique Badji that had a 1 v 1 against Room and didn’t convert, which gave Columbus the chance to equalize.

Columbus continued its attack throughout stoppage time, where there was also an egregious six minutes of added time. FCC looked to be about to hold out, but then the moment finally came for Columbus, as Roman Celentano decided to not get the ball and instead allowed it to bounce, giving Steven Moreira the chance volley it and score the equalizer. Then, because Columbus had scored, the game was allowed to end.