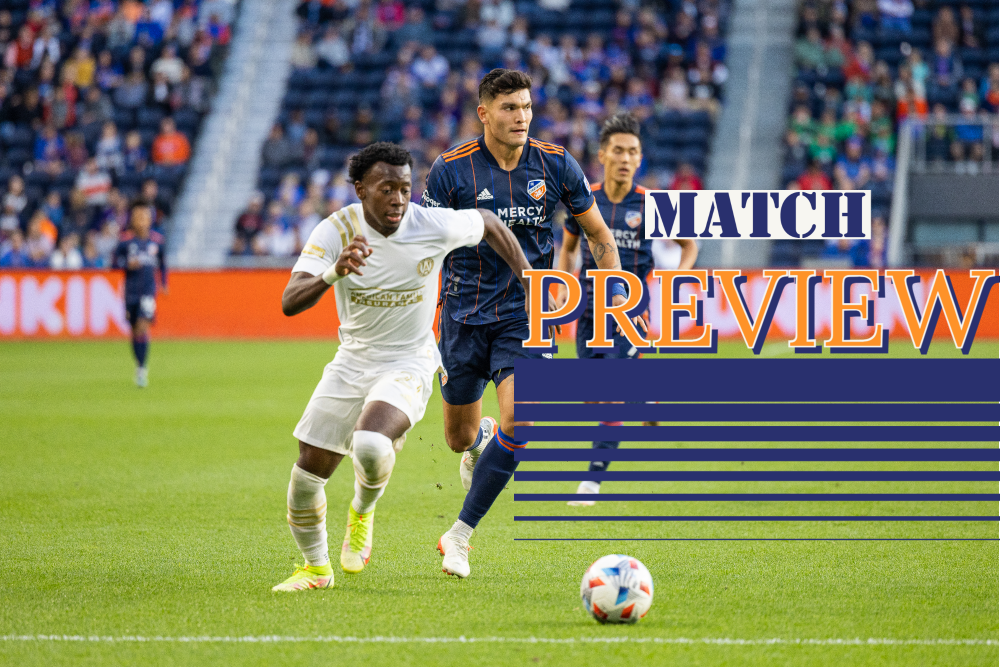 Atlanta sits just below the playoff line, with an eye on FC Cincy’s spot.

Coming off its best team performance of the season and a first-ever involvement in the MLS All-Star game by two of its players, FC Cincinnati faces another crucial Eastern Conference matchup, this time against Atlanta United at home.

Pat Noonan’s side was superb in a 3-1 victory over Philadelphia Union last Saturday, creating chances, scoring goals and defending with vigor. Then on Wednesday leading scorer Brandon Vazquez and leading assist man Luciano Acosta participated in the MLS All-Star Game, helping the MLS side defeat Liga MX 2-1 in Minnesota. Additionally, a major signing in former Chelsea defender Matt Miazga is poised to make his FCC debut on Saturday. The feel-good factor at the moment is palpable.

But none of that will matter to the visitors on Saturday, as Gonzalo Pineda’s side is fighting for a playoff berth just like the hosts. Atlanta comes off a 2-1 win over Seattle and has 28 points, just two points out of a playoff berth, but listed in 12th place due to goal difference, with seven teams in the conference qualifying. FCC are currently sixth in the table, with 32 points.

Noonan recognizes that once again, the match is vital.

“I think it’s the awareness of where we’re at and the importance of certainly winning home games,” he said in comments distributed by the club to the media. “Winning against teams that are right around us in the table, and certainly below us. I think that’s important. I’ve said to the guys, we want teams to be chasing us and not the other way around. So every game, every week that we can be above the line, that’s going to be important, and certainly this week with Atlanta, right in the mix and behind us in the table, this will be an important game for both teams.”

Once again FCC will be able to field a team that is nearly full strength. While left back Ronald Matarrita remains a long-term absentee, every other player featuring for significant minutes this season will be available for Noonan. Forward Sergio Santos is the only other question mark in the squad, the backup forward still working his way back from an injury suffered in his team debut a few weeks ago.

Noonan said Vazquez and Acosta are no worse for wear following their midweek work in Minnesota (neither played more than a half). Both should be available to resume their partnership with striker Brenner and left back Alvaro Barreal, who may have played his signature game for the Orange and Blue last weekend.

New signing Miazga is being counted on already to bolster the team’s back line performance. Noonan said the big defender has gotten stronger during the week’s training sessions, overcoming the effects of trans-Atlantic travel and the heat and humidity of the Midwest to look good enough for consideration as a starter on Saturday.

He noted that Miazga can play any one of three center back positions in the team’s more favored 5-3-2 formation.

“It gives us another strong option. He has played on the left. We’ll look at him in all of those positions that we’ve played with the three center backs,” Noonan said. “Certainly if you go to two, he’s played in that as well. I think it helps with his history to be able to play in multiple systems and in multiple positions along the back line. So it certainly gives us another option of where we can deploy him.”

Atlanta have struggled with some injuries this season, but received a boost of late with the return of standout attacking midfielder Josef Martinez. He has five goals and three assists in 2022, second only to Ronald Cisneros with seven goals.

Noonan said despite Martinez’s injury struggles this season, his team knows the Venezuelan is still a force to be reckoned with.

“I think good players find ways to have an impact on games, regardless of their fitness levels, regardless of how long they’ve been out. And he’s a very dangerous player, and a player that in and around goal, is as good as we’ve seen in this league,” Noonan said. “And so regardless of previous games, production, I can tell you that our guys are aware of the qualities that he brings. And we need to make sure that we’re aware of him, of how he comes off the backline. [He’s] very smart in finding pockets so that he can get their midfielders involved and they can get runs in behind from wider positions. And then obviously in and around goal, he’s very dangerous and being able to create space for himself and attack crosses, whether it’s cut back balls, whether it’s wide service, and he also has the ability to create on his own.”