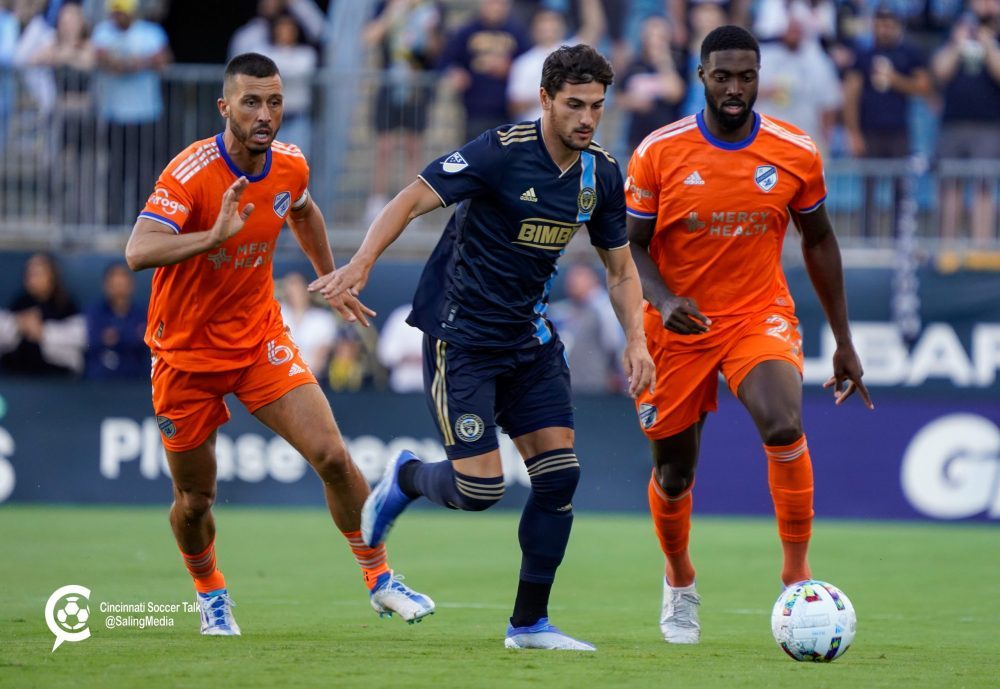 While the conversation revolving around FC Cincinnati at the moment is dominated by new arrival  Matt Miazga, the team still has an important game to play this weekend, at home vs. Eastern Conference leaders Philadelphia Union.

The TQL Stadium showdown will look like an uphill battle for Pat Noonan’s FCC team. Especially as it is in the midst of a 7-match winless streak, it should be remembered that FCC earned a 1-1 road draw with Philadelphia back in June. Brandon Vazquez scored the equalizer for FCC that night after Alejandro Bedoya had put the Union on top.

Following some midweek matches in MLS, the Orange and Blue are officially outside the playoff places in the table on goal difference, sitting 9th despite having the same number of points as Charlotte (7th) and Miami (8th). Trailing the Florida side in particular, after surrendering the lead to Miami in the final moments of play last week, shows how vital these inter-conference games can be. FCC also lost to Charlotte 2-0 early in the season. The games with the closest rivals end up being like double points in value.

“Close” wouldn’t describe Philadelphia in the table (19 points above FCC and riding a 5-match win streak). Jim Curtin’s team has been strong in every way. Scoring 40 goals and conceding just 15 in 29 games so far. The Union didn’t stand pat at the transfer deadline either, adding Red Star Belgrade midfielder Richard Odada and 18-year old Ghanaian defender Abasa Aremeyaw this week.

Scoring punch has come from multiple sources so far, with midfielder Daniel Gazdag leading the team with 11 goals. Forwards Julian Carranza and Mikael Uhre have each added 8 goals. Other regulars in the starting lineup for the Union include defenders Jack Elliott, Nathan Harriel, Jakob Glesnes, and Kai Wagner, midfielders Jose Martinez, Leon Flach, and Alejandro Bedoya, and goalkeeper Andre Blake.

Noonan, formerly an assistant at Philadelphia under Curtin said in comments distributed to media by the club, that the Union’s performance of late has confirmed their status as a league power.

“Five straight [wins] is pretty impressive and in the way that in which they’re winning their games, pretty convincingly,” he said. “They’re a confident group, as confident as I think we’ve seen them, so they continue to move in the right direction. Obviously [Head Coach] Jim [Curtin has] done an incredible job, and continues to do an incredible job with his team.”

In last week’s 4-4 draw with Inter Miami, FCC conceded goals with the final kick of the ball in both the first half and the match. Noonan said he and his staff are trying to balance addressing the issue of conceding late goals without causing the team to be too negative in the coming matches.

“It’s tricky because you can’t ignore it. But at the same time, you don’t want to put so much attention on it that it becomes a mental block and guys struggle to get past some of the areas where we’re underperforming,” he said. “We continue to look at the video and find and talk through ways in which we can improve and on the field, the same thing, we tried to replicate some of the areas that were struggling in and then just get more repetition in and see if we can find different ways to be successful so that it doesn’t continue to cost us.”

Saturday’s match will be the FCC swan song for midfielder Haris Medunjanin, with the 37-year being permitted to leave the club in order to finish his career in Europe. It is highly unlikely that FCC’s newest CB signing will be available as he arrives to Cincinnati and needs to get through protocols.