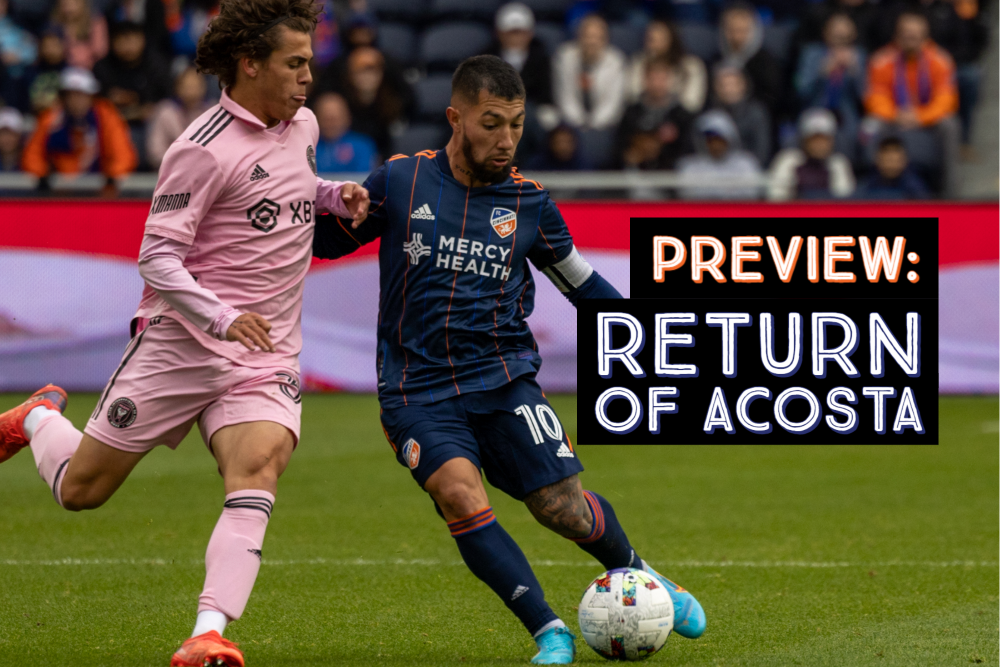 FC Cincinnati looks for a win as players return to action

Luciano Acosta returns to the lineup Saturday and fans hope the FC Cincinnati attacking midfielder will spark a return for his team to its freewheeling, attack-minded best.

A visit to South Florida for a match with fellow playoff pursuer Inter Miami is the competitive occasion for Acosta’s re-entry to the Orange and Blue gameday plan. The Argentine has finished serving his 3-match suspension by Major League Soccer for a sending off and subsequent actions toward the match referee during a July 9 home draw vs. New York Red Bulls. FCC recorded two draws and one loss during Acosta’s absence, with head coach Pat Noonan saying the team has been reminded this week during training what they’ve been missing with their team captain out.

“He looks like a creative attacking option for us on the field. He’s been good. It’s been nice to have his presence, you can see, just with the ideas of how to get him on the ball and move off the ball, he just adds a different element,” Noonan said in comments distributed by the club to media. “And so it was nice to have him on the field this week and available.”

Acosta’s return comes a week after FCC welcomed midfielder Junior Moreno back into the squad following a multi-week injury layoff. Moreno performed well off the bench in last weekend’s 1-1 draw with Nashville. Left back Ronald Matarrita remains a long-term injury absence, and forward Dominque Badji and Sergio Santos are still out, but with standout forwards Brenner and Brandon Vazquez continuing in the starting XI, Saturday will be the closest FCC has been to fielding a full-strength team in a while.

The timing for that is good given the pivotal nature of the game in the Eastern Conference playoff hunt. Miami is three points behind the Orange and Blue, but with one game in hand. Noonan said the importance of the match is evident, but not unique to this game on the schedule.

“Every game we play feels like it’s three very important points. I think we could have said that for a lot of our recent opponents, in terms of where we were in the table, where they were in the table, and a good stretch of home games,” Noonan said. “So we have a team that’s right behind us in the standings. So it’ll be an important game for us in terms of what the end of the season looks like, if we can go and have a strong performance and get three points.”

FCC defeated Miami 3-1 at TQL Stadium in March. The biggest lineup change for the hosts from the early season match in Cincinnati is the addition of Alejandro Pozuelo, a classy midfielder from Spain who will be playing in his third match for the club following a trade with Toronto FC. Noonan said the acquisition further strengthens the Inter Miami midfield, as the playmaker combines with the strength in ball-winning and possession provided by Gregore and Jean Mota.

Other mainstays in the starting lineup for Phil Neville’s squad this season include defenders Damlon Lowe, DeAndre Yedlin and Christopher McVey and forwards Leonardo Campana, Gonzalo Higuain (leading goalscorer for the club with 8 tallies) and Ariel Lassiter.

“Totally different team than the last time we saw them,” Noonan said. “They’ve gradually improved in a way where, Phil has them in a good spot. I think they have different ways to be able to cause you problems.”