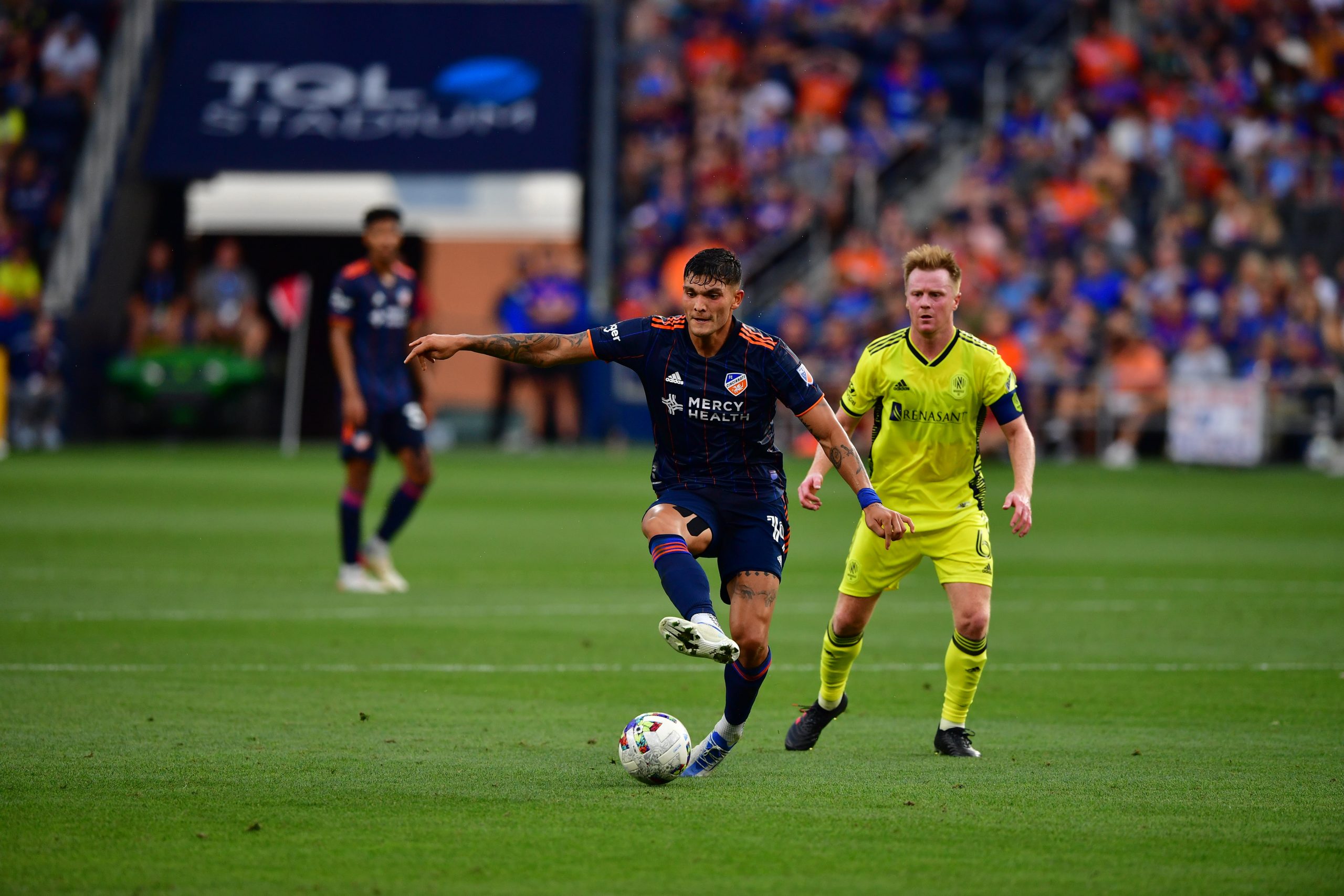 Call it nostalgia, but the end result on Saturday night felt familiar to those fans who had seen FC Cincinnati and Nashville SC play during the 2018 USL season. Both teams came into their one and only scheduled 2022 matchup with superstars surprisingly absent. The result was a pressure-cooking 1-1 draw at TQL Stadium.

FC Cincinnati (7-7-8, 28 pts.) came into the match with the need to swing momentum after five straight matches without a win. They were forced to recover after an early lapse against Nashville SC (8-7-7, 31 pts), who entered the match as one of the better road teams in the Western Conference.

The Orange and Blue had a little more solidity in their overall roster with midfielder Junior Moreno returning to the bench. With Luciano Acosta still serving the last match in his three-match suspension, Alvaro Barreal assumed his spot in the midfield. Alvas Powell and Geoff Cameron re-entered the starting lineup for Ray Gaddis and Allan Cruz, while Dom Badji and Sergio Santos were the only major injury absences.

Nashville SC came into the match with a surprising empty void, as midfielder and MVP candidate Hany Muhktar was held out due to an injury concern. Defender Anibal Godoy also was held out as he makes his way back from injury. Newly-signed USMNT defender Shaq Moore started on the bench but was not utilized by head coach Gary Smith.

Surprisingly, veteran Teal Bunbury started over DP Ake Loba, and right off the bat, Smith’s decision to play Bunbury paid dividends. In the sixth minute, Randall Leal’s corner kick deflected to the Nashville forward. Bunbury’s mini-bicycle kick in the box beat Roman Celentano for his first goal of the season and a 1-0 Nashville lead.

Nashville opted to ride out the rest of the half with a heavier defensive approach. FC Cincinnati’s only shot on goal was a Barreal attempt in the 39th minute swallowed up by goalkeeper Joe Willis. Brenner had two chances on goal from corner kicks, only for both headers to float wide right. The Orange and Blue enjoyed advantages in possession (51%/49%) and shots (7/3) by halftime, but the only statistic that mattered was the goose egg on the scoreboard.

FC Cincinnati’s momentum continued after halftime and almost turned on a dime. In the 53rd minute, Barreal attempted a left-footed shot off a Yuya Kubo corner kick. The knuckler bounced high, and Brandon Vazquez directed a header past Willis for his 11th goal of the season. Vazquez’s equalizer was also his sixth headed goal of the season, leading all of MLS.

Vazquez almost gave FCC the lead directly after in the 54th minute, barely missing a shot past Willis’s right side.

Nashville opted to play a more conservative game afterward but had their opportunities. A Walker Zimmerman header in the 58th minute forced Celentano into action for a point-blank save. Overall, Celentano made two saves and had another solid performance in net.

The final thirty minutes saw the return of Moreno to the pitch as a substitute. The Venezuelan midfielder saw his first minutes since his two-goal performance on May 28th, distributing 89% of his passes accurately and playing solid work with Obi Nwobodo.

“The first ten minutes were super-intense, it felt like the best moments of the game,” Moreno mentioned after the match. “For starters, it was a good thirty minutes for me.”

While FC Cincinnati controlled the overall possession battle (59%/41%) and the shots on goal (4/3), they did not dominate in shot quality. Nashville led the xG battle (1.63-1.46), bolstered mostly by Bunbury’s early goal. The end result was FC Cincinnati’s sixth draw in eight matches, and while it was a positive result, the general feeling was that it was another win that escaped.

Coach Pat Noonan described the result as “a hard-fought point” after the match, but still expressed frustration. “It was unfortunate that start ended up being the difference. We talked about it in the week that (Nashville) was a team you wanted to get out in front of. You get behind early against a team that knows how to defend well and for longer stretches. You could see the challenges that were presented to us, just having to come from behind. Right now, we just can’t put it all together.”

“We’ve had too many games I think we’ve deserved to win,” Vazquez told the media afterward. “We’ve had the opportunities, and we couldn’t put them away. We’re satisfied and happy to take a point, but we’re hungry. That’s how the locker room feels.”

FC Cincinnati hangs onto seventh place in the Eastern Conference, while Nashville falls to sixth in the West, pending the results from other matches.

FCC travels to Fort Lauderdale for their road matchup against Inter Miami next weekend, while Nashville returns home for a clash against Vancouver.