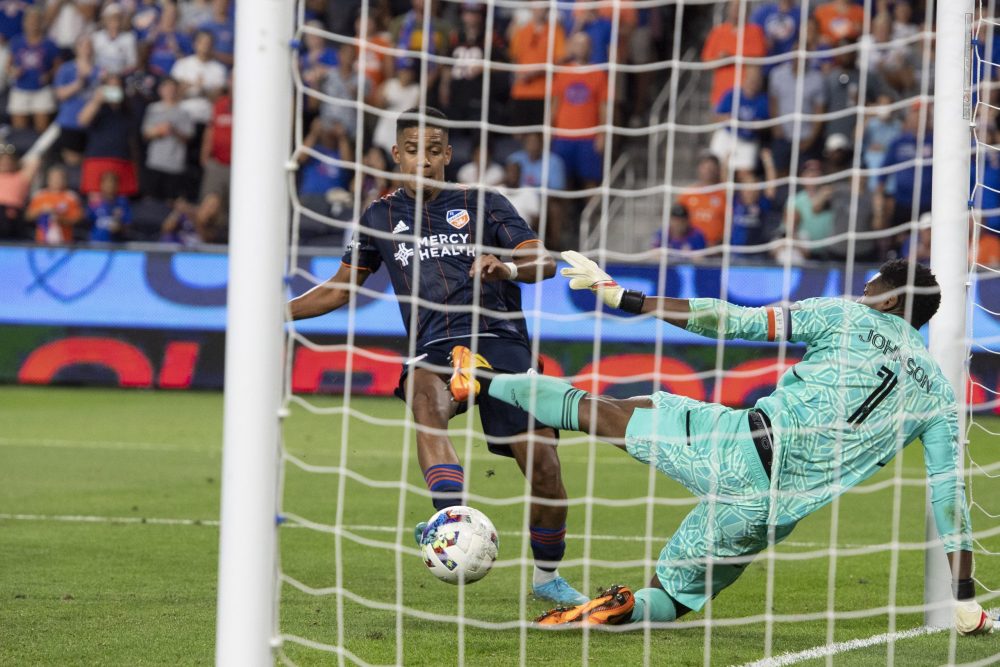 A lot happened in Wednesday night’s 4-4 draw with New York City FC. A blown three-goal lead, questionable officiating decisions, a saved penalty. But none of this should overshadow Brenner’s performance. The Brazilian striker had his first career hat trick, a bicycle kick for the annals, and could have easily scored five, given two goals were negated by the officials.

“Scoring creates confidence,” Brenner said, via an interpreter. “I’m working hard for those goals. I’m thankful that the fans are recognizing my hard work. Now I’m just focused on the club and what we are trying to achieve.”

FCC has been defying expectations all season. And for about 30 minutes on Wednesday night, it appeared the Orange and Blue would do so again.

But a disastrous final 10 minutes of the first half saw a three-goal lead evaporate, and Pat Noonan’s men missed out on an opportunity to send shockwaves across MLS.

“Not walking off the field with three points is certainly disappointing,” Noonan said. “We didn’t do a good job getting pressure on the ball. I was really pleased that after those 10 minutes and a poor start to the second half, of the character of the group. We continued to push.”

Brenner’s hat-trick was the first for FCC since Manu Ledesma in 2018. And it came against an NYCFC side that is the only one FCC has faced more than twice and not earned at least a draw against, losing each meeting by a combined score of 22-5.

The New York side they faced on Wednesday was missing four regulars including Taty Castellanos who didn’t travel due to illness.

A 1-1 draw at Eastern Conference-leading Philadelphia Union and a 1-0 win against fourth-place Orlando City helped FCC maintain their playoff position in the East.

The first half on Wednesday was almost indescribable.

FCC struck first when Gaddis won the ball and fed Vazquez who found Acosta in the box, and the Argentinian created space on his own to put the Orange and Blue ahead 1-0 in the 15th minute.

Brenner who scored his first goal of the season in the win over Orlando, appeared to put the Orange and Blue ahead 2-0 with a nifty back-heeled goal in the 19th minute, but VAR ruled the ball went out of bounds before Acosta retrieved it and fed the Brazilian.

No matter, because Brenner answered with two goals six minutes apart, assisted by Acosta and Vazquez, to make the score 3-0 in the 34th minute.

Adding to a sensational first half by FCC, Roman Celentano saved a penalty by Maxi Moralez.

But the Orange and Blue let its guard down in the closing stages of the half, conceding two NYCFC goals, one each by Heber and Talles Magno to reduce their lead to 3-2.

Then in the final minute of stoppage time, NYCFC equalized on another Heber goal off a free kick, his sixth career goal against FCC.

The players entered the dressing room to a chorus of boos from the crowd of 21,258, mostly aimed at the officials who appeared to miss an offside call on Heber’s goal and of course, the overturn of what would have been Brenner’s third goal.

NYCFC got the go-ahead goal on a Gabriel Pereira shot from outside the box in the 56th minute.

But Brenner completed his hat trick in the 69th with a pristine strike from outside the box and it was 4-4. He appeared to score the winner in the 90th, but it was ruled offside after a VAR review.

“His demeanor and his attitude has been great,” said Noonan, of Brenner. “He was probably frustrated early on about not being able to get on the field. He’s asking good questions about the attack, positionally. He’s been engaged in a positive way. We’re starting to see the end product.”

Among the most unfortunate things in Wednesday’s match was Obinna Nwobodo getting his fifth yellow card of the season, meaning he’ll be unavailable for Sunday’s match at New England.

The beef with the officiating crew boiled over following the match when Noonan and midfielder Haris Medunjanin approached them as they were escorted off the field by officers.

“I won’t reveal (the conversation),” said Noonan. “Total lack of professionalism from the (assistant referee). Regardless of what we think of the officials on the day, there’s a standard of how you respect each other and the game. I think that respect was lost at that moment. It was a rough day for the officiating crew.”

Medunjanin revealed what the official said, although he didn’t identify which assistant referee made the comment.

“How can you guys say ‘You guys gave it away, so don’t come to us right now’. He crossed the line,” Medunjanin said. “We are fighting for our points here. Now you blame us. It’s disrespectful. The referees should take responsibility. If you mess up, you mess up. We mess up. It was our mistake.”