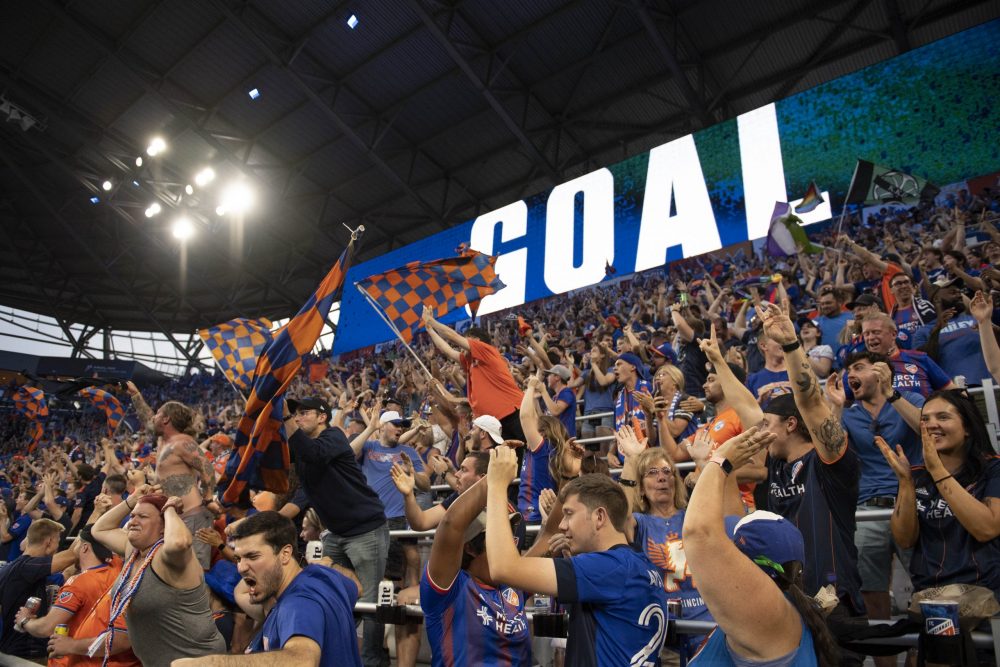 7th win for a club record in a MLS season

While the Queen City celebrates Pride Week, the timing was perfect for the Pride of Ohio to face the Pride of Florida.

In the battle between winged lions and unwinged lions, FC Cincinnati (7-2-7, 23 points) took all three points against Orlando City SC (7-4-6, 25 points) with a 1-0 home victory. The Orange and Blue rode Brenner’s first goal of the year to sweep the season series and set a new club record for points in a season.

FC Cincinnati returned to TQL Stadium for the first time in a month after snapping a losing streak with a 1-1 draw in Philadelphia. Meanwhile, Orlando came into this matchup with two positive results in a row, including a 2-1 victory over Houston on Saturday.

While much of the FCC roster was generally back to health, midfielder Junior Moreno and forward Dom Badji were noticeably absent due to leg injuries. Forward Calvin Harris was still absent after green-card issues, and goalkeeper Alec Kann was held out for another game. Midfielder Luciano Acosta started the game on the bench, still not 100% after being out due to coronavirus protocols.

Orlando were also without some notable names. Midfielder Mauricio Pereyra was out after not training with the team the past week. Defender Robin Jansson was out due to yellow-card accumulation, forcing the Orlando defending line to play with right-back Kyle Smith as a center back. Right before kickoff, left back Joao Moutinho was pulled due to injury and replaced by Thomas Williams.

While Orlando handled possession most of the first half (56/44), the stronger advantages fell Cincinnati’s way. In the first 45 minutes, FCC enjoyed three shots on target, while Orlando managed just one. Nick Hagglund had an early chance to break open the game in the 14th minute, only for goalkeeper Pedro Gallese to kick away his effort. Gallese took care of two later attempts around the 39th minute, twisting to slap away an Alvaro Barreal shot from outside the box and a Hagglund header on the following corner kick.

While Roman Celentano was not challenged until the end of the half, his flexed his sprawling skills to pounce away an Ercan Kara shot in the 31st minute, only for the offside flag to wave it off. A shot by Jake Mulraney late at the end of the first half was corralled easily.

While the FC Cincinnati offense came out a little stagnant to start the second half, the simple substitution of Acosta for Nelson in the 56th minute changed the flow. FCC had managed eight shots as team before Lucho’s arrival. After the 56th minute, the team took six shots—five from Acosta alone.

The match winner came from the shot Acosta did not take. Acosta tested Gallese from the top of the box in the 65th minute, only for Gallese to palm the deflected shot into the box. Acosta flew past the defense to grab the rebound and center to Brenner for the tap-in. Brenner’s first in-play goal of the season put the Orange and Blue up for good.

Orlando had its one shot at an equalizer late in the second half. Alexandre Pato launched a cross into the box in the 82nd minute, only for Antonio Carlos to direct his open header wide of the goal. FC Cincinnati managed to salt the game away from there to get their seventh win of the season.

Despite the late surge in Orlando possession (46-54), FCC commanded the offensive numbers, but also shut down Orlando on defense. The seven shots, two shots on goal, and the 0.28 xG for Orlando were all season lows for an FC Cincinnati opponent.

This game appeared to be one coach Pat Noonan had his team prepared for. “This was a fantastic performance from our group,” he mentioned in the press conference. “I think defensively that’s as good and as disciplined as we have been, front to back, this year. I thought we limited a really good team with the ball from creating chances over the course of the 90 minutes. At halftime, we thought that one goal would probably win this game.”

Ray Gaddis, playing his second complete game in a row, had glowing words for the coaching staff’s preparedness. “I feel like the coaching staff gave us the right amount of time off, but they also pushed us during the break. They always kept us engaged, and they did a wonderful job keeping us sharp and ready.”

The win pushes FC Cincinnati into sixth place and keeps Orlando in fourth.