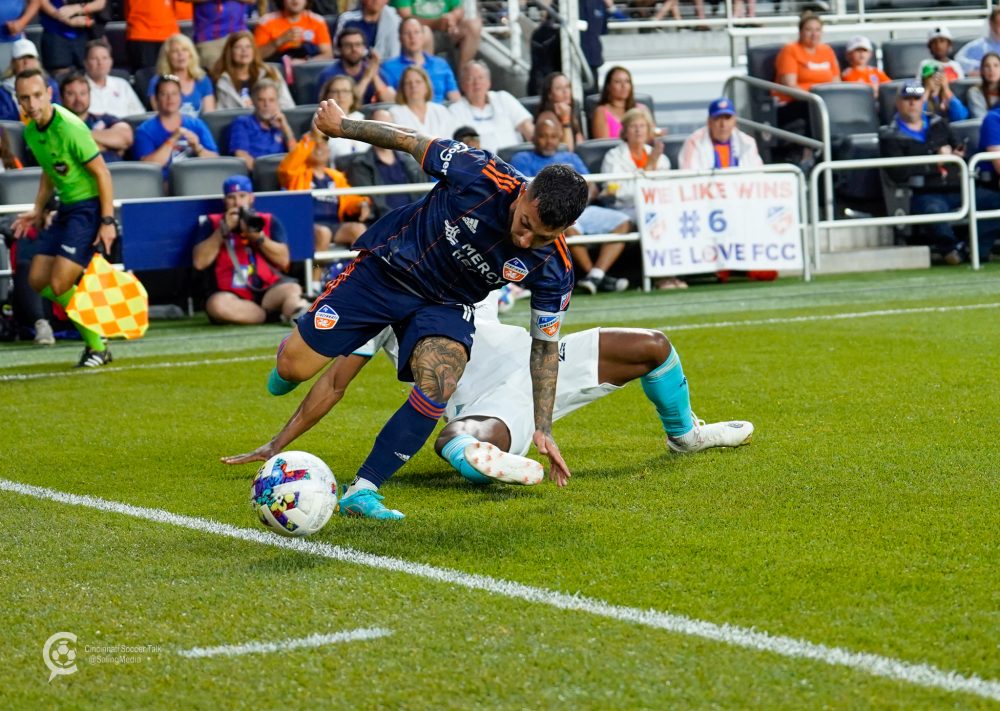 The Orange and Blue were brimming with confidence following four straight MLS wins and a chance for a seat atop the Eastern Conference standings greeted them on a stormy Saturday evening in the West End.

But a crushing defeat on a late goal by New England’s Tommy McNamara deflated the 22,844 fans in TQL Stadium.

“This one’s on us (for) not executing the things we discussed before the game,” said FCC head coach Pat Noonan. “This is a game that we shouldn’t be walking off the field without at least a point.”

There’s no denying how promising this start to the season has been for the Orange and Blue who despite Saturday’s loss, still find themselves in a playoff position. But of their six losses this season, four have come at TQL Stadium. That fact was not lost on the players following the game.

“If you want to be a playoff team, you can’t drop points at home,” said defender Nick Hagglund, a Cincinnati native. “We’ve done well on the road. I don’t know exactly why that is. I think all the games we’ve played at home, we’ve been in. We’re close, it’s just trying to figure out how to get a result at home, especially for the fans. They deserve it.”

Saturday’s match was delayed around 90 minutes due to lightning from a line of severe storms that passed through the downtown area just prior to the scheduled 6 p.m. start.

For the first time this season, FCC had the same starting XI for consecutive matches. There were some key additions to the squad, however, with Yuya Kubo and Raymon Gaddis returning from injury. Brenner was unavailable due to a disciplinary issue.

Lucho Acosta wore the captain’s armband for the 41st time in his FCC career, tying Kendall Watson for the club record.

FCC didn’t get off to the start it hoped for on Saturday when Sebastian Lletget’s right-footed scissor kick goal put the Revs ahead 1-0 in the 17th minute.

“Our defensive positioning early in the game, we were retreating too often,” Noonan said. “We wanted to defend higher up the pitch and we lost that shape too often.”

The Orange and Blue answered fewer than 10 minutes later when clever footwork from Acosta gave John Nelson some space and his brilliant ball into the box found Vazquez who headed home the equalizer.

It was Nelson’s second career assist and Vazquez’s seventh goal this season, tying him for second in MLS. Acosta leads MLS with 43 key passes.

“Johnny gets a good touch to the end line, I peel back toward the center backs, he clips in a perfect ball, and I just smashed it hard and low,” Vazquez said. “I was excited to get back on the scoresheet.”

FCC was sloppy in possession at times in the first half. And it cost them again when New England regained the lead 2-1 shortly before halftime on an Adam Buksa goal in the 43rd minute. That goal stole the momentum from the home side.

“Poor turnovers that were leading to us having to defend a team that has quality with the ball and space,” Noonan said. “We open ourselves up in unnecessary ways and they punish us for us.”

FCC was facing New England for the second time in 10 days, after losing 5-1 to the Revs in the US Open Cup on May 11. The Orange and Blue had lost to the Revs four straight times dating to 2019.

In the 58th minute, Dom Badji did well to get a cross into the center of the box and Alvaro Barreal buried the shot to tie the score 2-2.

It was Barreal’s first league goal this season.

The Revs flirted with a go-ahead goal in the 74th minute when defender De Juan Jones’ shot went off the post just beyond Roman Celentano’s reach.

Kubo entered the match in the 76th minute, replacing Badji. It was Kubo’s first minutes since April 24 due to an ankle injury.

It appeared FCC would be able to secure a point, but McNamara’s curling shot from the edge of the box sailed past Celentano to give New England a 3-2 lead in the 89th minute.

It was reminiscent of so many games the past few seasons. But so far, this year feels different. And the club has done a better job managing those moments.

“We need more consistent and confident in the way we attack our opponents at home,” Noonan said. “We give too much space away at times. We need to be more aggressive on both sides of the ball at home. We need to figure out a way to send these fans home happy.”

The Revs have conceded nine goals in the final 15 minutes this season, most in MLS. And FCC had scored game-winners from the 85th minute in consecutive games for the first time in the club’s MLS history.

But there was no drama in stoppage time as New England held on for all three points, and did so in heartbreaking fashion.

“If you look the last couple years, it hasn’t been close, it hasn’t felt close,” Hagglund said. “At least it feels like things are trending in the right direction. We’ve been on a four-game winning streak. This brought us back down to Earth. We have to grind and get a response to this game. At some point, you have to say that it’s not good enough.”