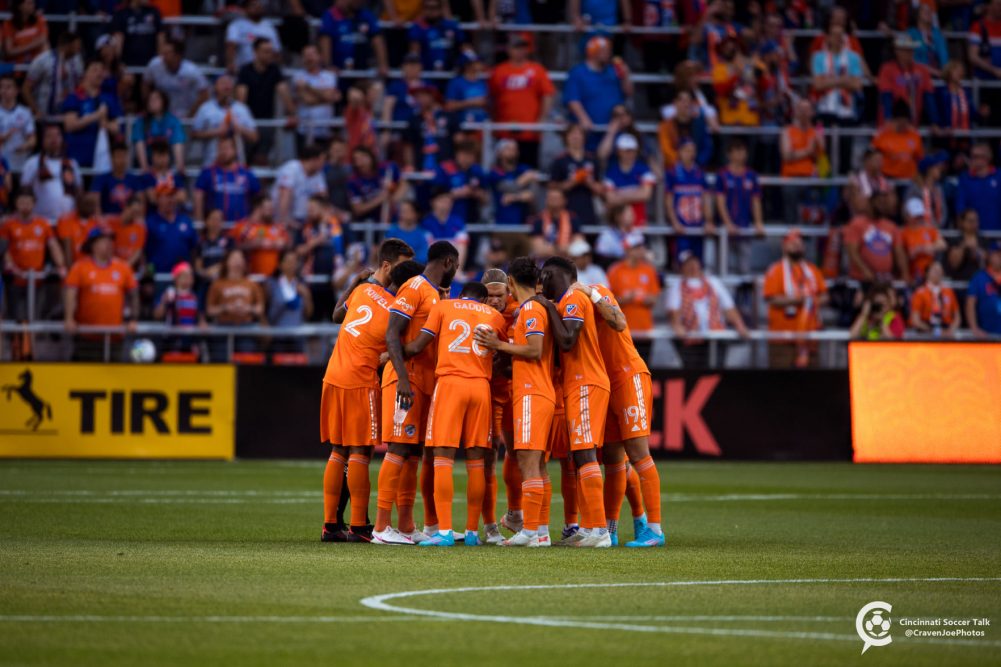 Pat Noonan’s FC Cincinnati squad travels to Georgia this weekend for a Saturday evening contest at Atlanta United FC, hoping to reverse the club’s fortunes against the 2018 MLS Cup winners.

In eight matches over three seasons, FCC have only managed one victory, a 1-0 decision during the MLS is Back Tournament at Orlando. While Atlanta are not at the same level as the team that tasted success in the franchise’s opening years, a win Saturday could serve as a real benchmark as to just how improved the visiting side is at this stage of the season.

The big news around the team this week has been the signing of DP midfielder Obinna Nwobodo from Goztepe S.K. in Turkey. The Nigerian will not be available for Saturday’s game however as he waits for his paperwork to clear, so Noonan and company will have to focus on the task at hand with the same personnel.

The team has had two weeks to prepare for this one following its 4-3 home loss to CF Montreal on April 2, For Noonan, more time on the training ground at this stage of the season will be a good thing as he and his coaching staff continue building the culture and system capable to producing improved performances on the field.

A tactic and a formation will be among the main variables for the visitors Saturday. Related to this will be further discovery of who might play left back following the long-term injury to Ronald Matarrita while on international duty. Questions also exist on the fitness of right back Alvas Powell for Saturday, and of course the ongoing conversation about when club DP Brenner might crack the starting lineup in the 2022 campaign. Forward Brandon Vazquez and Goalkeeper Alec Kann will return to face their former club, Kann for the first time since leaving Atlanta in the offseason.

Atlanta’s season thus far has been a short roller coaster ride. Gonzalo Pineda’s team started the 2022 season out with a 3-1 win at home vs. Kansas City, followed by a 3-0 loss at Colorado, a 2-1 win vs. Charlotte, a 3-3 draw vs. Montreal and last weekend’s 1-0 defeat at Charlotte.

Forward Josef Martinez has been the focal point of the team’s attack, with two goals and two assists this year in league play, but Martinez is out for at least a few weeks with a knee injury. Atlanta has had a series of minor injuries affect their preferred starting XI, with the only two players to start all six of Atlanta’s games being defender Andrew Gutman and goalkeeper Brad Guzan. Other stalwarts in the lineup include defenders Miles Robinson, Brooks Lennon, Alan Franco and George Campbell, midfielders Santiago Sosa, Thiago Almada, Amar Sejdic, Osvaldo Alonso and Matheus Rossetto and forwards Tyler Wolff and Marcelino Moreno.

Noonan recognizes Martinez will be a big loss for the home side, but believes they will still be a potent attack and overall, a major challenge for FCC on the day.

“Certainly, they’ve lost some key players over the last week or two, but they also have a strong roster. They have a lot of depth, so it’s going to be a challenging game,” Noonan said in comments distributed by the club to the media. “They have physical center backs, good pace at the center back position, with their outside back, wing backs, with Lennon and Gutman, they get up and down so they can put you under a lot of pressure higher up the field. They have the ability to recover defensively, so it makes them tougher to break down. I think in the middle of field, Sosa is great at playing forward and finding passes that break pressure. So, we need to find ways to close him down if he’s on the field. Two very good one-v-one players in Moreno and Almada. How do we take passing lanes away and make sure that they’re occupied?”

Ultimately, Noonan believes the match presents an opportunity for his team to get a good result.

“With Josef out, we’ve seen different options up top with speed, with experience,” he said. “So it’ll be a really good challenge, and a good atmosphere. But we know that if we go in confident, we can get a result. And if we execute, we can get a result, but it certainly will be a challenging game for us.”

While FCC will face another match just three days after the Atlanta tilt (Tuesday at home to Pittsburgh Riverhounds SC in the U.S. Open Cup), Noonan says any lineup rotation will come in the context of the Atlanta United match being paramount.

“It’s great to have more competition, but it certainly brings about the challenges of squad rotation of travel, of a quick turnaround, what does the recovery look like? Our priority is Saturday,” he said. “And as we get through Saturday, we’ll evaluate where guys are at based on how the game plays out and look to give other players an opportunity that maybe haven’t been getting the bulk of the minutes. So, this is why you have a roster, the size that we do, is so you can utilize the guys that are in a reserve role. We also have the ability to send guys to get minutes you know with the second team in New England on Sunday. So, it’s a unique three or four days where the conversations are daily as to how things are changing based on player availability. First and foremost what Atlanta looks like, and how we’ll look to recover in a short amount of time to put a group out there to have success against Pittsburgh.”