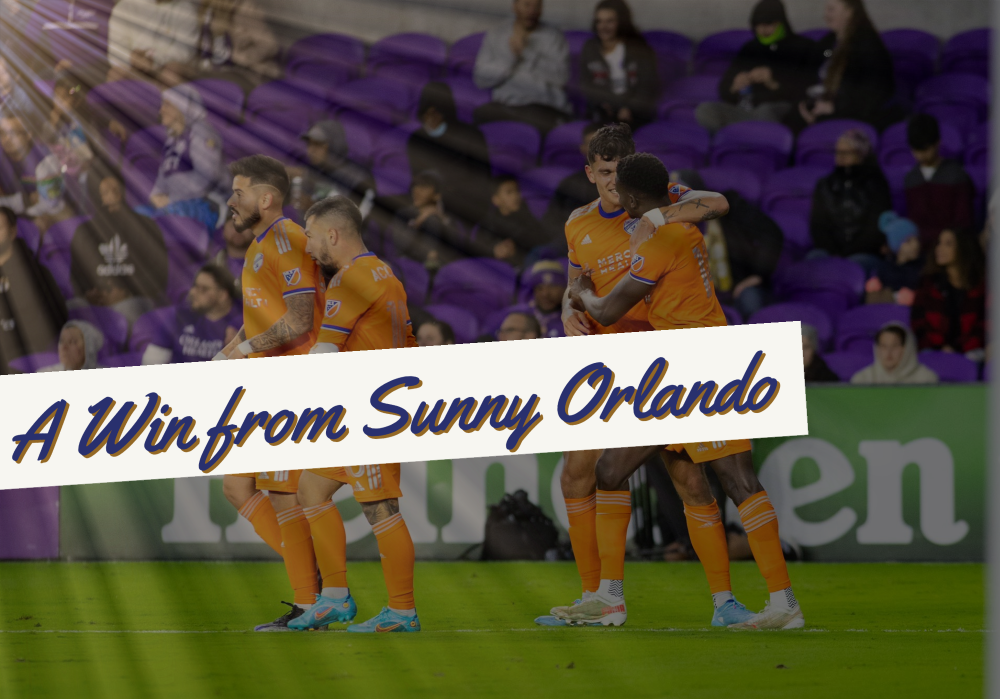 3rd match is a charm, FC Cincinnati gets three points in Orlando to snap a long losing streak.

FC Cincinnati (1-0-2, 3 points) marched into the Sunshine State to finally feel the warmth of a positive result, taking a massive 2-1 win from Orlando City SC (1-1-1, 4 points). Orlando railed on the Cincinnati defense the entire match but was unable to counter two goals from Brandon Vazquez.

While the last-second loss to D.C. United last Saturday was deflating, the Orange and Blue had to rebound without key figures in their squad. Both Brenner and Ray Gaddis suffered day-to-day injuries late in the week, while Allan Cruz missed the game due to a family matter. The defense was already threadbare with absences from Ronald Matarrita, Gustavo Vallecilla, and John Nelson. Head coach Pat Noonan opted for a defense-heavy 5-3-2 scheme with rookie Ian Murphy starting for the first time at left back.

Orlando started the season with a firm 2-0 victory over Montreal and a 0-0 draw against Chicago. However, the Lions had never lost to FC Cincinnati the past three years (3-2-0), including a 2-2 draw in the preseason. Orlando’s only major absence was due to a sickness protocol, leaving their team mostly healthy.

It took a little over ten minutes for Cincinnati to finally mark their scoring sheet in 2022. In the 13th minute, Luciano Acosta drew attention from the defense and threaded a pass to Vazquez on the right. Vazquez nutmegged Pedro Gallese for his (and the team’s) first goal of the season.

Despite that flash of offense, much of the first half was saved by Alec Kann’s performance in goal. Headers by Ercan Kara and Junior Urso were palmed over the bar by Kann in the 17th and 26th minutes. Orlando’s best chance—a header by Alexandre Pato to Kann’s left in the 22nd minute—forced the goalkeeper to sprawl and slap the shot aside.

As a strategy, the Lions focused on penetrating through Murphy’s defense on the left and finally exploited it. Facundo Torres lifted a cross into the box in the 42nd minute, and Junior Urso caught Murphy flat-footed. The midfielder’s header sailed past Kann to make it 1-1 before the halftime whistle.

Orlando’s possession dominance (66-34) quickly pulled the halftime stats to their advantage. Orlando held an advantage in shots (8-4), shots on goal (5-1), and overall xG (0.92-0.52). Noonan quickly altered the overall shape to a 4-3-3 by replacing Murphy with Isaac Atanga.

Noonan noted in his press conference afterward that the substitution built up the left side of the field with Tyler Blackett sliding to left back and Dom Badji moving to left wing. That transformation of the attack led to the second goal.

In the 53rd minute, Yuya Kubo laced a pass down the left, and Badji shouldered Ruan off the ball to gain possession. Vazquez caught a bullet-cross from Badji square in the forehead and headed it past Gallese for his brace to make the game 2-1.

Much of the rest of the half involved constant clearance from Orlando’s attack. Geoff Cameron provided two clutch blocks in the final ten minutes of the game. Meanwhile, Kann made a diving save in the 84th minute to deny Antonio Carlos a heading equalizer. The teams slowed the pace down with delays in Orlando’s end, departing with three vital points.

Cincinnati’s win breaks a record streak, the first win in their last 15 matches. While Orlando had the 18-9 shots advantage, the FC Cincinnati defense absorbed four blocks over the last 20 minutes. Their three points on the road is their first away win since June 2021 against Toronto FC (which was also played at Orlando’s Exploria Stadium.)

FC Cincinnati now sits in 10th place having dug out of the last position with this result. The Orange and Blue come home victorious and prepared to face Florida’s other MLS squad, Inter Miami. Orlando falls to 7th place with their first loss of the season.