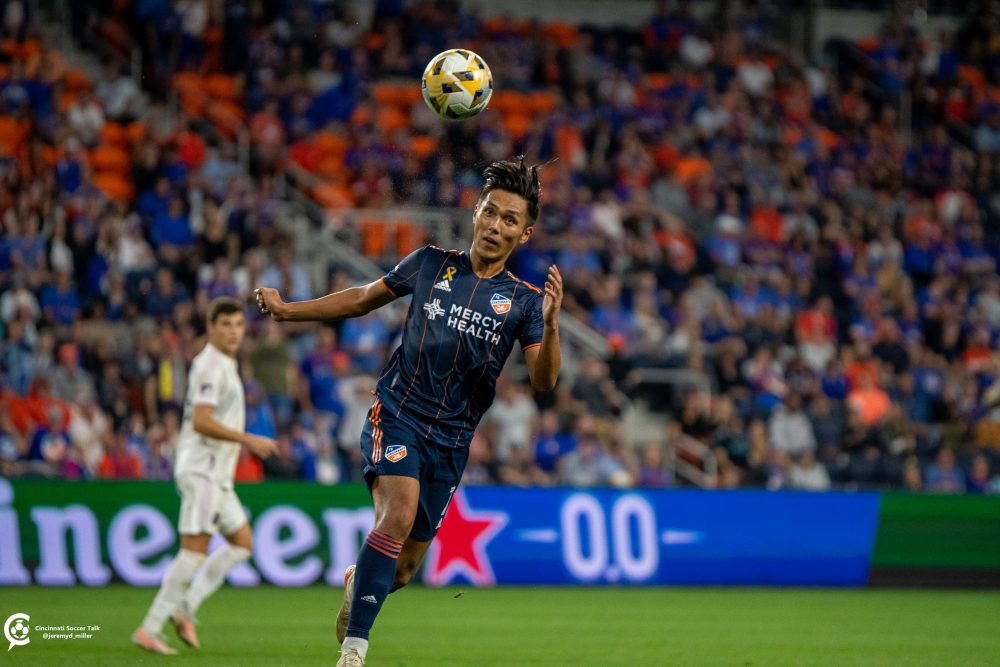 Kubo has taken over as a leader in midfield. What once was a strange decision is now a problem to undo.

FC Cincinnati has played 180 minutes of match time under interim boss Tyrone Marshall. The box score results have not been pretty. A 3-2 loss at Toronto FC and a 1-0 defeat at home courtesy of New York Red Bulls leaves Marshall with a -2 goal differential and zero points. Expected goal values over a short period of time should not be relied on to project anything into the future but in Marshall’s two matches at the helm, FCC expected goals minus expected goals allowed stands at -3.5 (0.9 xG to 4.6 xGA). Not ideal. Add into that the losses came against a fellow Wooden Spoon contender and another team disappointingly below the playoff line in the Eastern Conference, it’s safe to say FCC hasn’t benefited from a new manager bump.

However, two matches – especially when Marshall’s team selections were hampered by suspensions – is not enough time to fully assess what’s different about this new iteration of FCC. Until we get more data about how Marshall wants his teams to play, it’s worth considering one of the most noticeable adjustments to FCC’s lineups and what it’s meant for the team.

Kubo’s Return Out Wide Leaves A Light And Unfamiliar Midfield

Maybe the most noticeable change so far during Marshall’s short tenure is Yuya Kubo’s return to a more advanced role on the left wing from Jaap Stam’s preferred position for him at the base of midfield. A lack of central midfielders necessitated Kubo’s move to midfield at the start of this season despite no experience there. However, Kubo quickly adjusted from novice defensive midfielder to FCC’s most reliable, effective option at that position. Which makes Marshall’s decision to return Kubo to the flank all the more interesting.

Without Kubo in midfield, FCC loses a player who, per 90 minutes, contributed 27 pressures, 60 touches, and 49 attempted passes, and more than 6 tackles and interceptions. Though he was not always as aggressive looking forward as he could have been, Kubo was a valuable contributor in breaking opponents’ high pressure and in both recycling possession in the midfield and occasionally pushing the ball forward. FCC has struggled to involve its left wingers throughout the season and Kubo presence in the position hasn’t changed that.

more data about how Marshall wants his teams to play, it’s worth considering one of the most noticeable adjustments to FCC’s lineups and what it’s meant for the team.

To compensate for the absence of Kubo in midfield, Marshall played two different double-pivot partnerships in his 4-2-3-1 setup: Allan Cruz and Florian Valot against Toronto and Haris Medunjanin and Caleb Stanko against NYRB. Those midfielders provide different options, forcing FCC to play in two different ways. 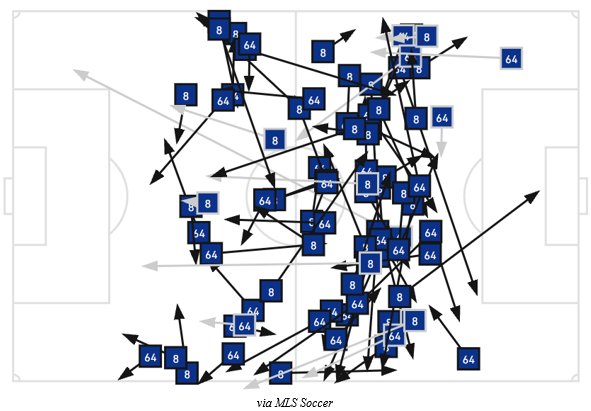 Also, despite pressuring the ball at a decent rate, Cruz and Valot failed to win the ball back, combining for just three tackles and interceptions. Cruz’s pressures led to turnovers more often than anyone else in Orange and Blue but it’s hard to control the midfield when both members of a double-pivot do virtually no ball winning.

In contrast, the Stanko-Medunjanin partnership applied much less pressure to opponents, combining for just 16 pressures against NYRB. However, both midfielders looked to bypass New York’s press with long balls, attempting a combined 25 passes of 30 yards or longer. As shown in their pass maps, Medunjanin and Stanko (especially Medunjanin) looked to ping diagonal balls to the wings from deep in midfield while completing few, if any, passes into areas immediately surrounding the attacking penalty area. 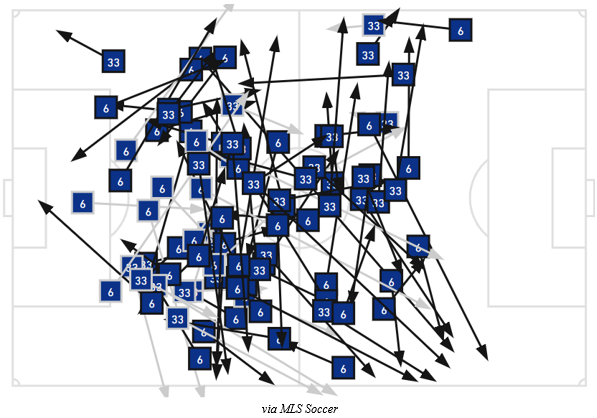 Given that Kubo just started playing the position at the start of this season, it’s hard to believe that he would be such an integral piece at this point. Marshall’s combination of midfield double-pivots is an interesting idea in theory but it’s hard to look at either combination and not think that either one would be better with Kubo playing.