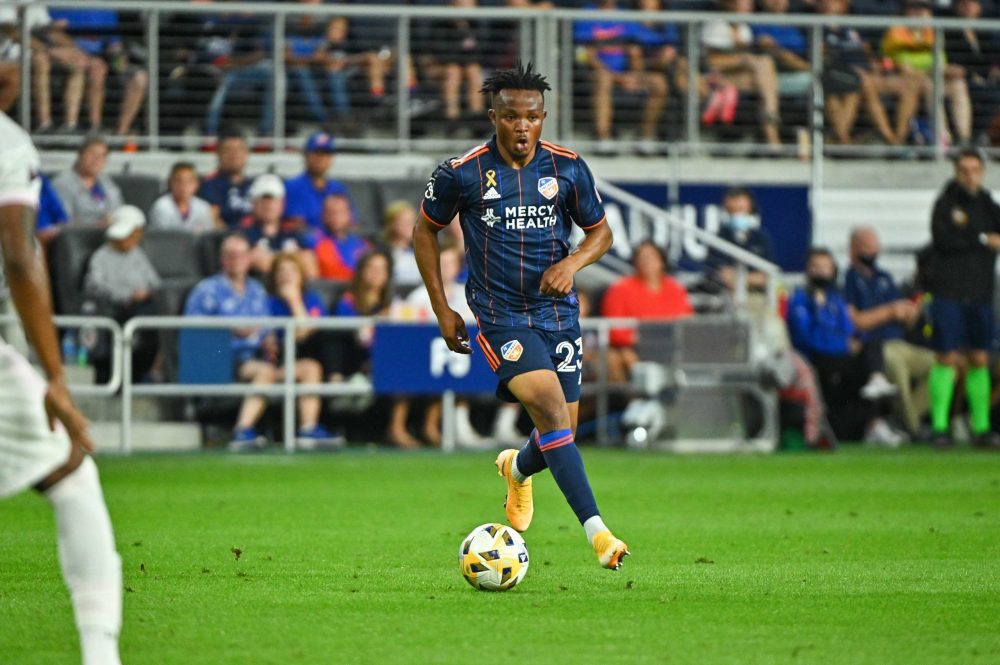 Off and On Again

Both the rain and the run of play started and stopped at TQL stadium. FC Cincinnati and Inter Miami CF started the match playing safe and slow. Without a true out-side back in the line-up, fans wondered how exactly FC Cincinnati would position themselves. Barrell started, oddly in a LB role with Hagglund as the RB in what looked to be a traditional back four setup but shifted at times into a 5-3-2. Miami CF seemed content to play FCC’s game, keeping their lines high and tight and not pressing. This resulted in FCC playing with a bit more possession, after some early turnover trouble, but struggling to do much with it in the midfield.

Act One: Up and Over

When Miami decided to play that defense strategy, Cincinnati was going to test it. This came primarily in several early long kicks to circumvent the midfield altogether. There were several but the main target was Atanga and a couple of times he did, in fact, beat his defender. Atanga got one cross off but it went into the keeper. Marsman easily handled another. Although Atangan did have success beating Miami’s backline, Atanga just couldn’t catch that solid first touch to put him in a solid position. Martialing Leerdam and Shea both ended up with the heavy-duty of covering these up and over balls for Miami.

One thing Stam will have to consider as the match edges toward a quarter of the way through is that Barreal has had zero influence offensively from his left wing back position. Atanga has been able to get forward a few times, but Barreal stifled so far. #FCCincy @CINvMIA

Shots were hard to come by and shots on goal even harder.

Barrell shifted from defender to midfielder to attacker on that left side. Often he was left with lots of space as FC Cincinnati preferred to work on the right. At the half, FCC has only one shot and Inter Miami still had yet to find one. FC Cincinnati opted to press and back up Miami while Miami took the midfield away from FCC. Both clubs seemed to work left to right and back looking for openings that were hard to find. What was odd is how alone Barreal seemed to be. At times on his own island, ignored but both the opposition and his team in the first half. Once the ball was kicked in the second he did get more active. His one early spot on the ball created a chance for the Orange and Blue.  Coach Gough put it best when he said, “It’s hard to imagine a team playing with two out-and-out wingers as wingbacks playing conservatively, but FCC has managed it. Team looking worried to take chances going forward, need to show some composure in the middle and final thirds”

Thrilling football was out the window after that first half, The second was more of the same with Miami tapping into their bench early and FCC waiting until later in traditional Stam fashion. The sub-strategy did change with a two by two approach. First in were Vasquez and Harris (Brenner and Atanga) and later Kamohalo Mokotjo and Florian Valot (Medunjanin and Cruz). There was a slight surge in momentum after that second set and the best ten minutes of soccer in an otherwise boring match sprung forth. Despite the extra effort, the stalemate looked locked in and the headline was going to read, “Stam plays it safe, slowly plays his way to a Home point.” Unfortunately, FC Cincinnati end of match breakdowns continue. Shae had the ball on the edge of FCC’s final third and with nowhere to go passed it out. It looked like they would again go around the pitch looking for an opening. Harris must have thought so too because he drifted away Shea, then he drifted further away. Instead of kicking it right, he was spotted and by the time Harris turned around, there was no way to get back in time. Miami didn’t have many chances but as the visitors, they only needed one.