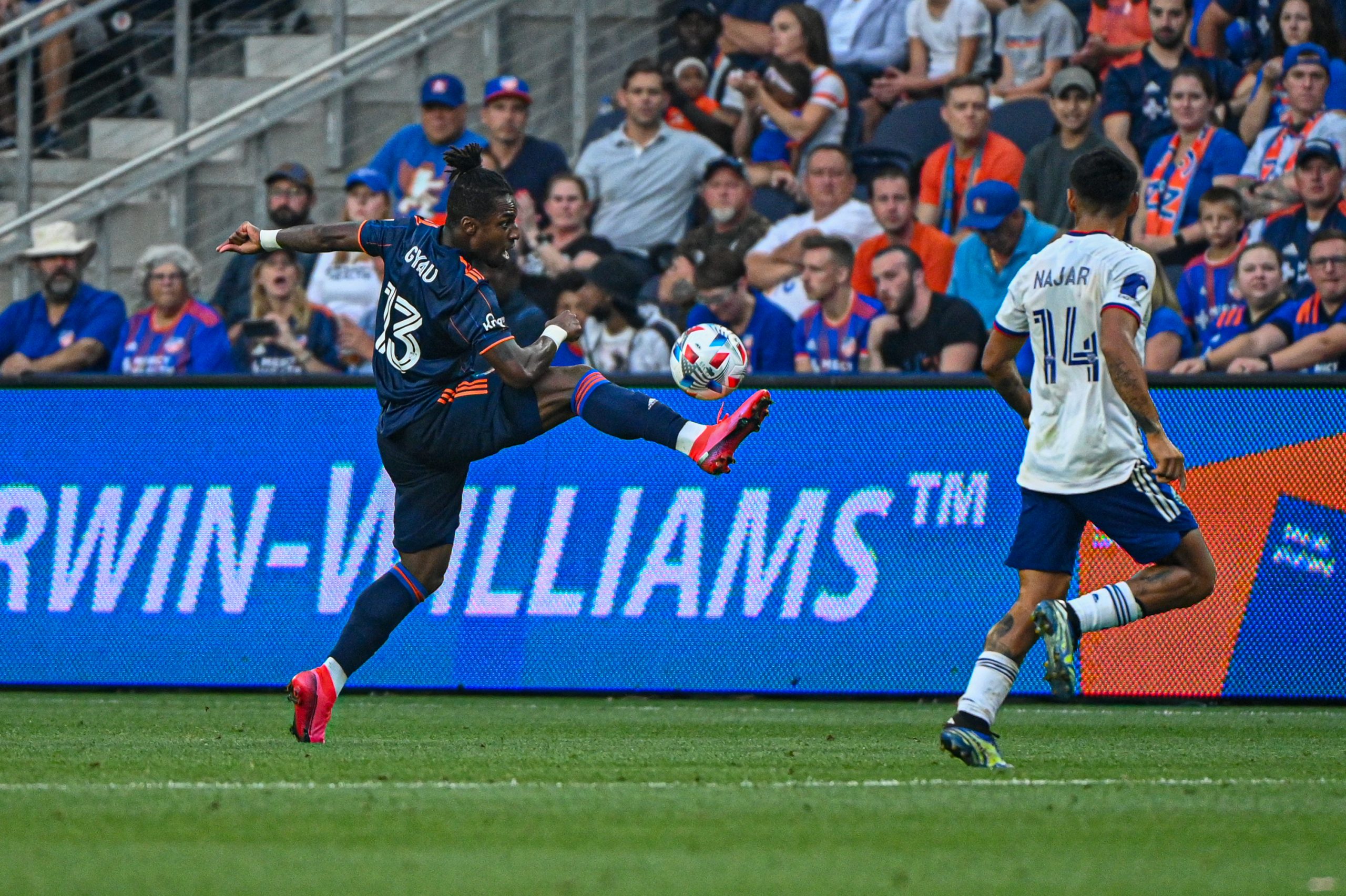 FC Cincinnati again could not take advantage of a 10-man opposition against D.C. United, but Nate Gilman says some changes by coach Jaap Stam showed repeatable patterns of attacking play.

FC Cincinnati’s run of draws continued on Saturday night against D.C. United, and just as frustratingly, the Orange and Blue failed to take advantage of a DCU team down to 10 men for nearly half of the match and a two-man advantage for part of second-half stoppage time. However, I thought Saturday demonstrated some attacking progress. I’m not writing that to be provocative or deliberately contrarian. I just think there was some evidence of a repeatable, attacking plan which could lead to more goals and more attractive soccer in the future. Hopefully after reading this, you’ll think so too.

FCC’s lack of chance creation is nothing new. However, this wasn’t a redux of FCC’s performance against Columbus. FC Cincinnati dominated the ball after Moses Nyeman’s red card, and despite looking vulnerable on the counterattack a few times after, FCC denied the Black and Red clear-cut scoring opportunities. Also promisingly, coach Jaap Stam seems to have made an adjustment that put FCC players in positions to create more dangerous passages of play.

Sure, that might be a low bar, but numerous times during the second half FC Cincinnati created dangerous sequences of play from possession. This team will likely always have more success in transition, but any progress in possession, even against 10 men, should be welcomed.

New (Or A Return To Old) Roles For Some

First, it’s worth talking about some pretty major adjustments made by Stam to FC Cincinnati’s lineup. What looked certain to be a three-center back formation actually ended up playing with four defenders. Joseph-Claude Gyau moved up the field from his customary right back spot to play on the left wing.

Nick Hagglund took Gyau’s place at right back. Hagglund didn’t get as far forward or contribute the same ball progression as Gyau, but for the most part, Hagglund seemed to be asked to play as a fairly traditional right back. Kevin Paredes troubled Hagglund multiple times on Saturday, beating him on the dribble or drawing fouls. That shouldn’t be too much of a surprise as Gyau is the closest thing to a right back currently on FCC’s roster. Nyeman’s red card likely let FC Cincinnati off the hook because attacking down FCC’s right would surely have been a focus for DC United in the second half.

Rónald Matarrita and Allan Cruz also both started after returning from Costa Rica’s quarterfinal loss in the Gold Cup. Cruz’s return provided more mobility in midfield, and Matarrita was heavily involved on both sides of the ball. Edgar Castillo proved to be a capable fill-in for Matarrita, but as demonstrated on Saturday, Matarrita brings a level of quality on the ball that few FCC players have.

FCC Still Not Creating Enough Shots, Even Up A Man

After Nyeman’s straight red card dismissal in the 52nd minute, FCC managed eight shots, according to MLS Soccer, worth a combined 1.05 expected goals. However, 0.77 of the total came from two chances: Luciano Acosta’s attempt in the 81st minute (which MLS Soccer considered a shot, though Football Reference and other sources did not) and Brandon Vazquez’s last-gasp attempt in the 94th minute. Let me be clear, FC Cincinnati still does not create enough scoring opportunities, and Saturday was not an exception.

That’s not the full story, though. In the 70th minute, Stam made a tactical adjustment that put FC Cincinnati in a much better position to chase the game. Though FCC didn’t find a breakthrough, Stam demonstrated a willingness to at least adjust the team on the field to put it in a better position to succeed. Also importantly, the adjustment could mark a shift for FC Cincinnati’s attack in that it showed something that FCC has lacked all season: a repeatable, effective pattern of attacking play.

In the 70th minute, during a stoppage in play as Paredes received medical attention, Stam adjusted. Álvaro Barreal and Gyau swapped sides, ditching their roles as inverted wingers to instead play on their stronger sides.

The change nearly paid immediate dividends as Barreal swung in a great cross from the left side, but Gyau could only direct his header straight at Bill Hamid.

Just look at the differences in these two touch maps from WhoScored. Both maps show combined touches and actions from Acosta, Barreal and Matarrita. The first is from the 52nd minute until the 70th minute. The second is from the 70th, when Stam adjusted, until the final whistle.

Clearly, putting Barreal and Matarrita, two of FC Cincinnati’s most dangerous options on the ball, on the same side of the field worked. Stam’s decision to put Barreal and Matarrita on the same side of the field troubled D.C. United’s defenders. Add Luciano Acosta to the mix, as he often drifted wide to the left, and FC Cincinnati’s attack showed signs of something we’ve been looking for all season: repeatable patterns of attacking play.

The other key aspect of Stam’s adjustment in the 70th minute was to shift to more of a three-center back system, holding Hagglund deeper and more centrally. Gyau provided width on his natural right foot on the right wing, but much of the offensive focus came from the left.

The above two touch maps are from the same time periods but include all of FC Cincinnati’s players. After Stam made the tactical adjustment in the 70th minute, FC Cincinnati possessed the ball in more dangerous areas. The final ball just wasn’t there.

Where To From Here?

If Stam were to continue with the attacking set-up on display for the last 20 minutes, I’d expect to see better offensive results. Brenner did not have a particularly strong game on Saturday, but putting him in an offensive plan emphasizing cut-backs, crosses and interplay featuring FC Cincinnati’s most creative attackers unbalancing a defense should lead to better opportunities. There would still be major questions about how this tactical shape would hold up for 90 minutes against a full-strength opponent, especially if Hagglund is still the choice to play as a full back. However, given how much FCC has struggled in possession in 2021, I’d like to see it.