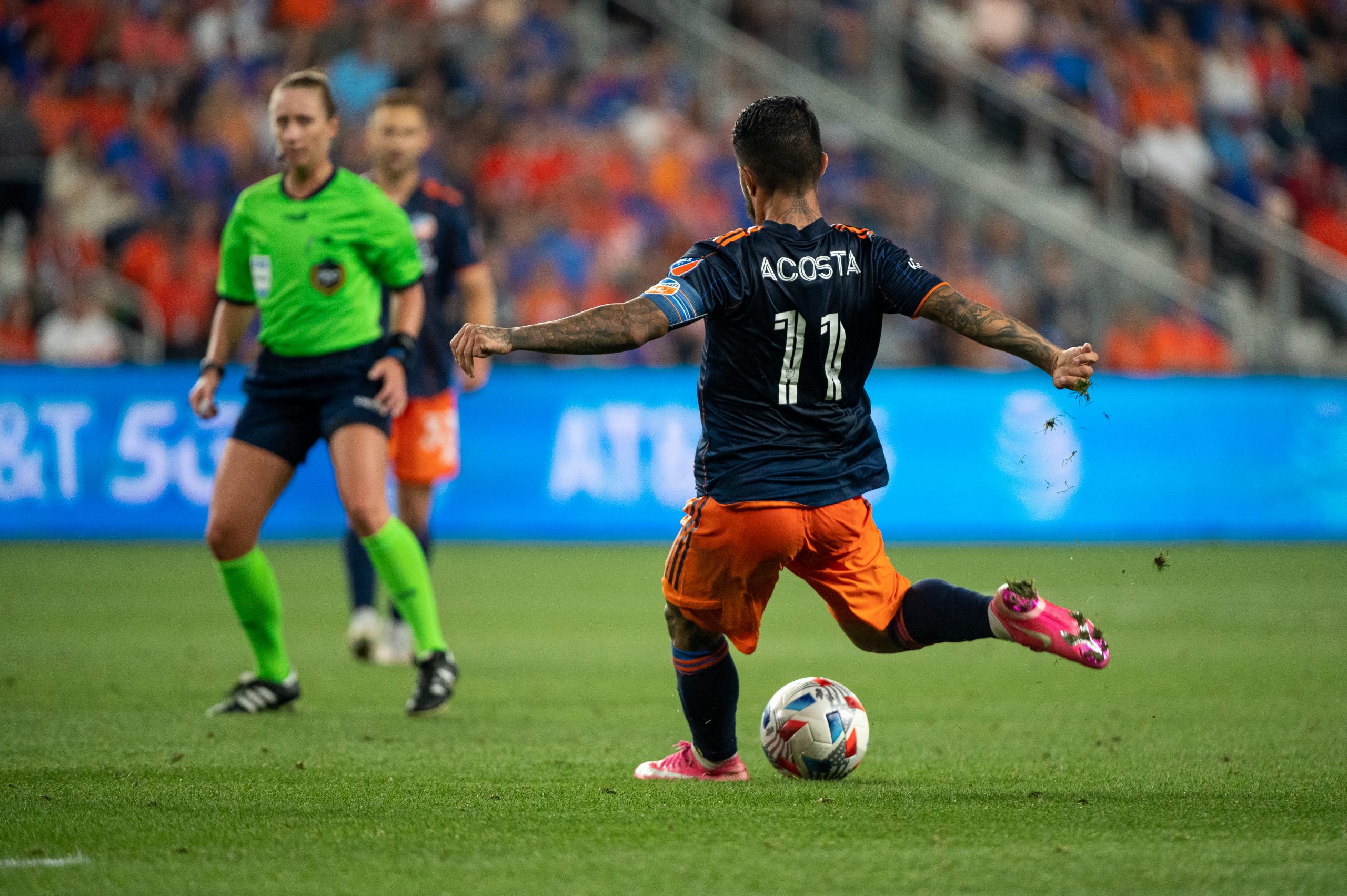 Luciano Acosta gave FC Cincinnati the lead in the 61st minute, but the club conceded minutes later Wednesday at TQL Stadium in a 1-1 draw with Atlanta United.

Jaap Stam played and won at the highest level during his football career, but he also learned a painful lesson in game management on the sport’s biggest stage when his Milan squad relinquished a three-goal lead to Liverpool in the 2005 Champion’s League Final.

It’s a lesson he continues to instill in his FC Cincinnati players.

“We were three-nil up with some of the best players in the world,” Stam recalled after Wednesday’s 1-1 draw with Atlanta United at TQL Stadium. “We’re working with human beings. There’s no magic ball to fix it. Taking the lead and keeping the lead is something you learn.”

After five matches in the West End, FCC is still looking for its first win at its new home. For the third straight match, the Orange and Blue dropped points from a winning position, and not even a moment of quality from Luciano Acosta late in the match was enough.

In the 61st minute, Brenner threaded a pass to Acosta, who eluded an Atlanta defender with a clever touch, then tucked his shot just inside the post to break a scoreless tie.

Atlanta equalized five minutes later on Ronald Hernandez’s right-footed shot from the top of the box, and FCC withstood a barrage of Atlanta set pieces to secure the point.

“It’s a lack of discipline,” midfielder Caleb Stanko said. “We score to take the lead and we become complacent and relax. It’s something that comes with experience.”

Dropping points from winning positions have been a theme for FCC recently.

FCC missed a golden chance to earn its first-ever victory at TQL when it blew an early two-goal lead and a man advantage in a 2-2 draw with rival Columbus on July 9.

Then at Montreal, the Orange and Blue twice led by two goals in a 5-4 defeat. FCC was missing three players in that match due to Canadian immigration restrictions, including top defender Geoff Cameron.

Stam and the players believed Wednesday’s match was a proper response to the debacle in Canada, particularly for FCC keeper Kenneth Vermeer, who after some costly errors in Montreal, recorded eight saves to stave off a late Atlanta assault.

“My mistakes didn’t help us (at Montreal),” Vermeer said. “We were all disappointed in our performance.”

Atlanta, who was without several starters including goalkeeper Brad Guzan, figured to deliver a spirited performance for interim head coach Rob Valentino who took over for Gabriel Heinze, who was sacked on Monday.

Atlanta also got a boost from the return of Josef Martinez, who made his first appearance since tearing his ACL in the first match of the 2020 season. He also has recovered from a heart issue resulting from a bout with COVID-19 while with the Venezuelan national team at Copa America.

Martinez subbed on in the 65th minute. His free kick in the 87th from the edge of the box following an Acosta foul forced a diving save by Vermeer.

“He needed to do better,” Stam said of Vermeer. “He’s an experienced keeper. We know what we expected of him. We spoke with him about that. (Wednesday) was another opportunity for him to show himself.”

There were no surprises on FCC’s weekly availability report with Zico Bailey, Calvin Harris and Maikel van der Werff out with injury and Allan Cruz and Ronald Matarrita away with Costa Rica at the Gold Cup. Yuya Kubo was serving a one-game suspension for yellow card accumulation.

Kamohelo Mokotjo was a notable absence from the pre-match team sheet after missing out on Canada. Mokotjo did train earlier in the week.

It wasn’t a crisp start for either squad with several ill-placed passes and only a couple of solid chances.

Vermeer made a point-blank save in the 21st minute after a Cameron turnover to keep things scoreless.

For about a 15-minute spell in the first half, FCC was the more dangerous side.

The best chance came in the 28th minute when Isaac Atanga’s effort off a cross from Joseph-Claude Gyau forced a solid save.

The match was scoreless at the half with Atlanta having 54 percent of the ball and FCC leading 10-8 in shots and 4-3 in shots on target.

The second half started with a flourish for the Orange and Blue.

In the 54th minute, Barreal, who gave United defenders fits much of the night, had his shot carom off the post then off the back of Atlanta keeper Alec Kann before rolling only inches wide of the far post.

Acosta’s go-ahead goal in front of the Bailey felt like a game-winner, until it wasn’t.

“It was not an easy game,” Stam said. “They’ve got good players. We were better in the second half. We were a split second too late and gave space away to allow them to score the equalizer. We need to be better in our organization and better on the ball.”