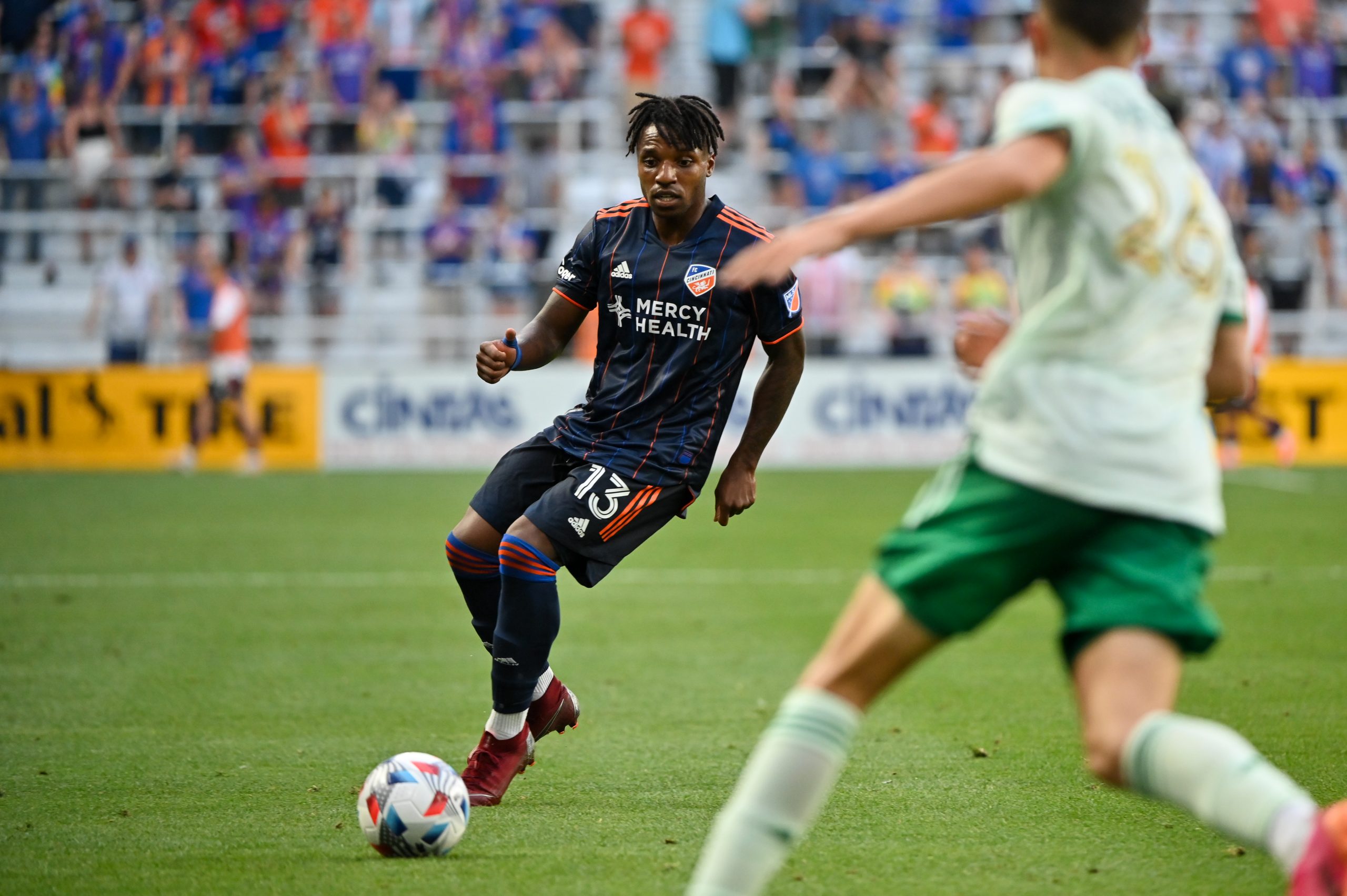 FC Cincinnati had a two-goal lead and a man advantage for most of the game but must live with a 2-2 draw in Friday’s Hell is Real Derby at TQL Stadium.

Everything was going FC Cincinnati’s way in Friday’s Hell is Real Derby.

The Orange and Blue had a two-goal lead and a man advantage before halftime against a depleted Columbus Crew squad. But then Hell is Real turned — well — hellish. As happens in good derbies such as this one, fortunes changed.

Behind a 77th minute goal from Miguel Berry, the Crew climbed all the way back for a 2-2 draw in the first Hell is Real Derby at TQL Stadium. The result earned a shushing of the TQL crowd afterward by Columbus coach Caleb Porter.

“We had it,” defender Joseph-Claude Gyau said after the match. “We could almost taste it a bit, and I think that’s what got us.”

It’s the third straight draw for the Crew, who were missing several key players, including noted FC Cincinnati killer Gyasi Zardes, to international duty or injury. Columbus (17 points, 4-3-5) moves to eighth in the Eastern Conference standings.

FC Cincinnati (12 points, 3-5-3) is 11th in the table. The club earned its first point at TQL and is now unbeaten in four straight. But the consensus afterward was a chance missed.

“We need to be better,” center back Geoff Cameron said. “We need to close out the game in a 2-0 situation. Obviously their first goal was a great strike and kind of against play essentially. But we lose the ball in particular areas, and they have the players to hurt us. Disappointing. It’s still a point, but it feels like a loss.”

FC Cincinnati had a dream start, with Edgar Castillo punching home a cutback pass from Luciano Acosta in the opening minute. Acosta added his third goal of the season in the 24th minute, sliding a shot under the hand of Columbus keeper Evan Bush to make it 2-0.

And then Hell boiled over.

“You can see the enthusiasm and the importance of this game,” said Cameron, who played in his first Hell is Real Derby.

“There’s going to be physicality, there’s going to be decisions made by the referee that you can’t control. I think we just have to be better at controlling the things you can control. You go up 2-0 at the beginning of the game, you should be able to see the game out, but you know there’s always going to be something in a game where there’s a rivalry.”

Afful was sent off with a second yellow in the 42nd minute, and the Crew were down to 10 men. But they also had the best player on the field in Lucas Zelarayan.

In first-half stoppage time, Zelarayan banged in a shot from 30 yards out that left FC Cincinnati goalkeeper Kenneth Vermeer flat-footed.

“Really they didn’t have much,” Gyau said. “That one popped out to Zelarayan, and he does what he does. He hit it perfectly. We wanted to come out (in the second half) and finish them off, but that’s not how it went. They were pushing. They didn’t let up.”

FC Cincinnati spent a good portion of the second half on its collective back foot.

In the 62nd minute, Zelarayan hit the crossbar of Vermeer’s goal and got an FC Cincinnati-friendly bounce. Columbus was building toward an equalizer and finally found it.

A through ball from Zelarayan found Berry, who went charging at FC Cincinnati’s goal. Vermeer came out to meet him, but Berry pushed it by to level the match at 2-2.

“You go 2-0 up and of course you’re very happy, but you need to be solid,” FC Cincinnati coach Jaap Stam said. “You need to be aware of the quality of the opposition as well and what they can do, what they can bring. … You’ve got the feeling that there’s more to get you can get overconfident at times.

“Sometimes when you play against 10 men, it is more difficult than to play against 11. The only thing is (Friday) that shouldn’t be the case because in possession you needed to do just a little bit better.”

Possession was statistically split, with Columbus at 50.3% and FC Cincinnati at 49.7%. FC Cincinnati outshot Columbus 13-9 and had more shots on goal at 3-2. Bush made the game’s lone save for the Crew.