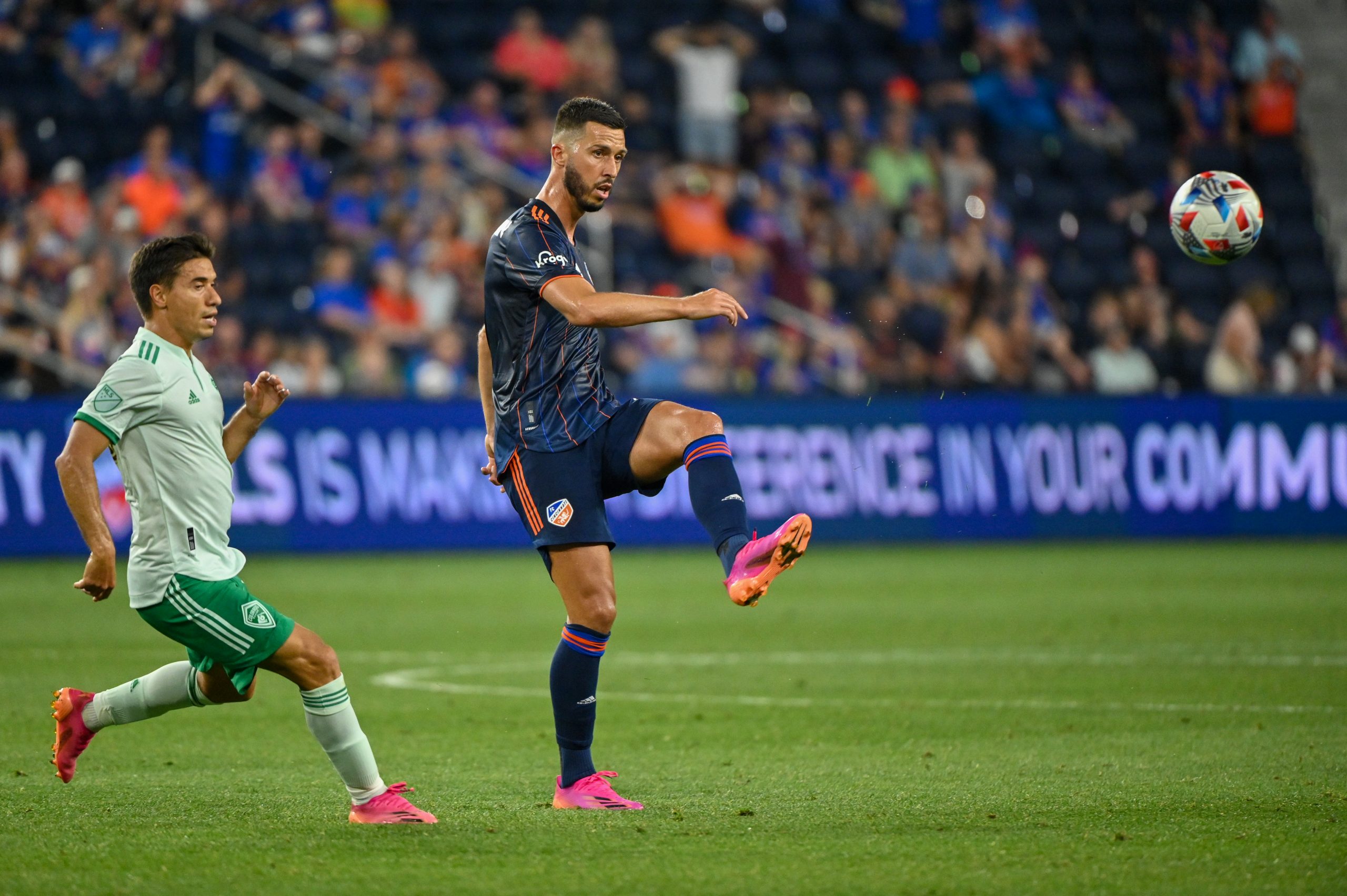 FC Cincinnati’s match against the Houston Dynamo started with a bang with two goals scored in the first five minutes. A scoreless 85 minutes plus added time followed that opening flurry. Ultimately, a draw was a fair reflection of the chances created by both teams. For an FC Cincinnati team playing its best soccer of the season, that draw is a fitting cap to a three-match road trip that yielded seven points. It’s an added bonus when that draw comes against a team firmly entrenched in Western Conference playoff picture.

Bounced Back From An Early Goal And Limited Quality Shots

For another match, FC Cincinnati’s defense limited quality scoring opportunities from its opponent. Of Houston’s 21 total shots on the night, nearly half of those were taken 20 yards or more from goal. After weathering Houston’s pressure for the first 30 minutes, FC Cincinnati denied the Dynamo clear-cut chances.

Houston’s best chances throughout the match came off set-pieces targeting Tim Parker’s head. FC Cincinnati’s set-piece defending pressured Parker in those opportunities, and he was unable to put any of the three chances on target.

Álvaro Barreal continued his excellent run of form, scoring the equalizer in the fifth minute and remaining dangerous for much of the match. Barreal’s chemistry with Brenner on the goal is a very promising sign, too. Though Brenner’s contribution on the goal doesn’t show up in the box score, his awareness of Barreal’s run behind him and his movement off the ball to freeze defenders demonstrates the value he can provide when dropping deeper for the ball. Speaking of Brenner… .

Brenner’s production hasn’t yet lived up to his transfer fee. Expecting a 21-year-old who moved to a new country with a foreign language during a global pandemic to adapt seamlessly was always going to be a big ask. Even in the best of times and situations, many young Designated Players arriving in MLS take some time to adjust and thrive.

There’s reason to be encouraged by Brenner, however. Against Houston, Brenner recorded a season-high in touches, touches in the final third, and touches in the opponent’s penalty area. For Brenner to thrive as a striker, he needs the ball in dangerous areas. For one match at least, the balance of where Brenner is on the ball was more suited to what FC Cincinnati fans want to see from him. 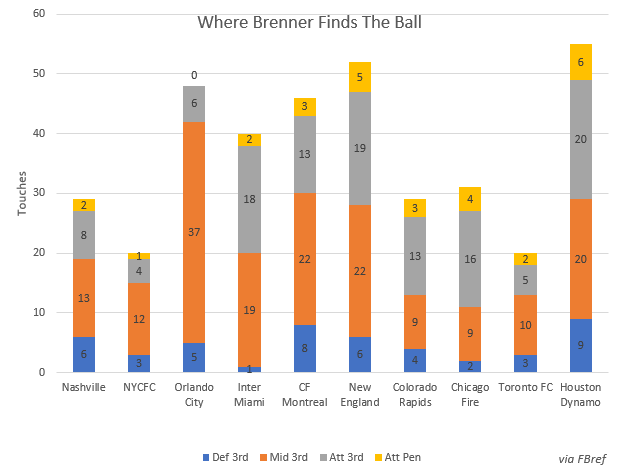 For comparison, per Football Reference, Brenner’s 13.15 touches per 90 in the final third and 3.02 touches in the attacking penalty area rank in the sixth and second percentiles respectively among MLS forwards in 2021. Because Brenner is on the ball in dangerous areas so much less than other MLS attackers, his shot volume is low, averaging just 1.83 shots per 90 minutes.

For Brenner to thrive, he needs the ball in attacking areas more often. Coach Jaap Stam has seemingly stabilized FC Cincinnati’s defense, so the next order of business must be figuring out a method to get the ball forward and to keep it there. If that happens, expect Brenner to be on the scoresheet regularly.

Kubo Looks Better And Better As A Defensive Midfielder

Yuya Kubo seemed to be everywhere against Houston. He contributed the most pressures (33), ball recoveries (15), and fouls (seven) during the course of the match, according to Football Reference data. Kubo’s defensive action map showing tackles, interceptions, blocks and recoveries illustrates how active he was all over the field. 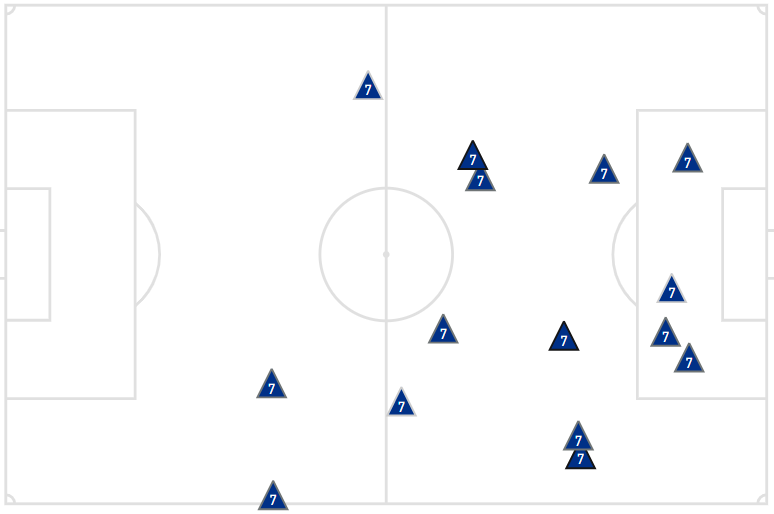 Kubo’s offensive role-playing deeper in midfield is still limited, especially when he’s looking to pass. Kubo attempted and completed more passes against Houston than in any match since the 3-0 loss to Orlando City SC in May. However, the bulk of those passes were sideways or backward.

Granted, Kubo made more passes under pressure than any other FCC player, but the passing range on display from him earlier in the season would greatly help FCC going forward. Kubo’s contributions carrying the ball forward against Houston should also be noted. Though his passing was largely neutral or negative, Kubo did push forward with the ball at his feet.

Ten matches into the Kubo-as-defensive midfielder experiment, I wouldn’t have expected to be writing about a string of strong defensive performances and wondering how better to include Kubo in the attack, but here we are. FC Cincinnati’s issues in getting and maintaining possession in the final third of the field remain, and it seems that a more active Kubo on the offensive side of the ball can only help solve the problem.

With Allan Cruz and Ronald Matarrita heading out to represent Costa Rica at the Gold Cup, Saturday’s match was a first test of FC Cincinnati’s squad depth, and Stam turned to Haris Medunjanin and Edgar Castillo as replacements.

Replacing Matarrita will not be an easy task for Castillo. Matarrita regularly led or came close to leading FC Cincinnati in touches, averaging nearly 66 per 90 minutes. Against Houston, Castillo’s 42 was the second-fewest of any outfield starter, only outpacing Isaac Atanga. It’s unlikely Castillo can offer the same threat going forward as Matarrita, so FCC will have to adjust its offensive gameplan. Defensively, despite a couple of shaky moments, Castillo finished the match with a solid defensive performance.

Similarly, Medunjanin was not and should not be asked to play the same role as Cruz. He’s less mobile than the high-intensity Cruz, meaning FC Cincinnati’s pressing options are more limited with Medunjanin on the field. However, Medunjanin gives FCC a more direct passing option out of midfield, something he looked to frequently against Houston.

Against Houston, Medunjanin recorded zero tackles or interceptions and pressured an opponent on the ball just seven times in the 76 minutes he was on the field. For context, this season Cruz averages 23.4 pressures per 90 minutes. Despite Cruz’s very obvious success pressing high up the field, most of his pressures on the ball come in midfield and the defensive third. If Stam has settled on Medunjanin and opts for a similar defensive style, he’ll need to identify other players to pick up some of the missing defensive pressure.