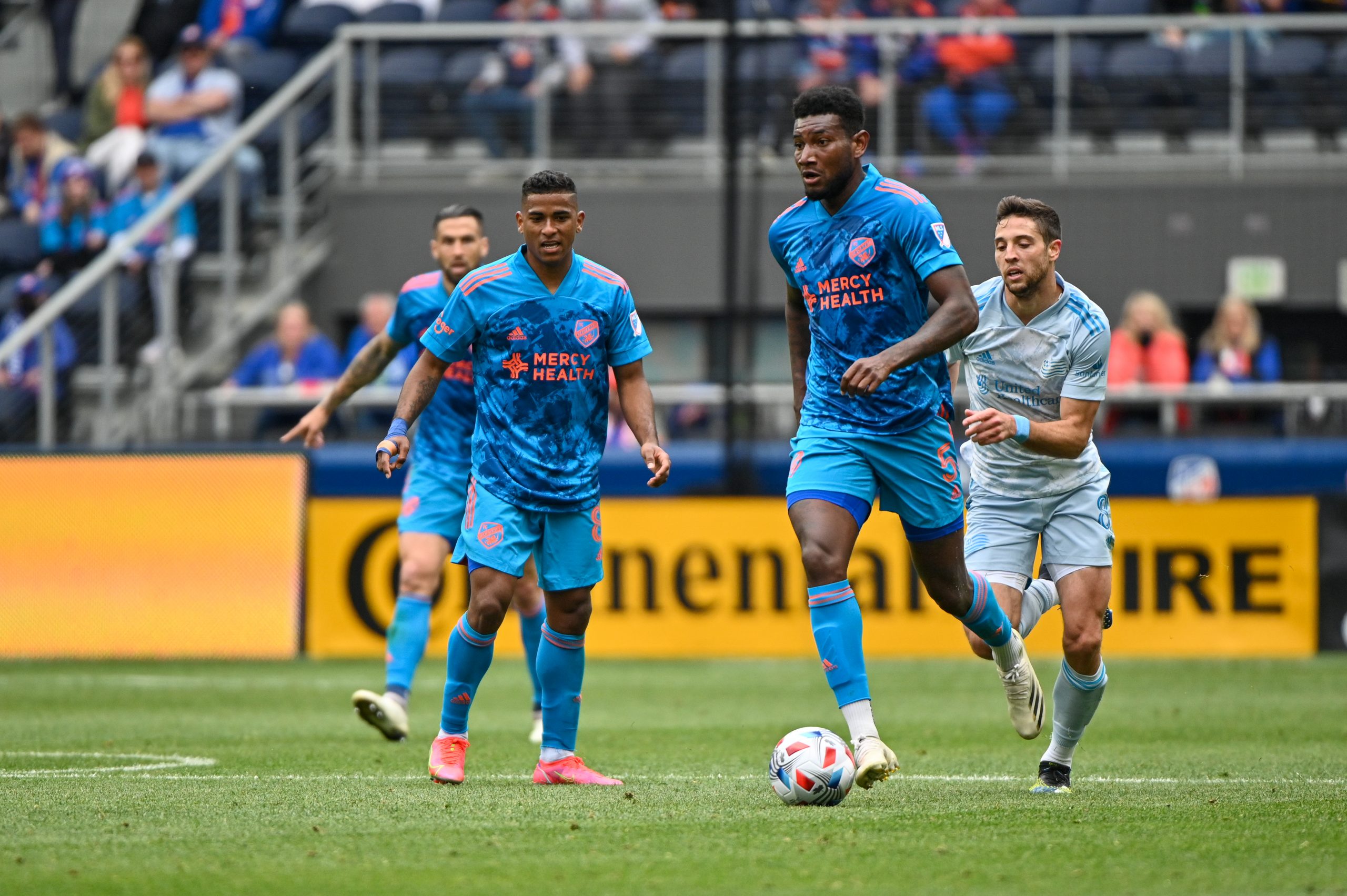 FC Cincinnati allowed the New England Revolution most of their shots Saturday in the first half, playing in a 3-5-2. Nate Gilman explains why this system gives a bend-but-don’t-break appearance to the Orange and Blue.

For the second consecutive match, coach Jaap Stam lined up FC Cincinnati in a 3-5-2 formation to start against the New England Revolution, with Caleb Stanko joining Geoff Cameron and Gustavo Vallecilla in central defense. Similar to the previous match against CF Montreal, the seemingly more defensively solid approach did not pay dividends. In the first half, FC Cincinnati conceded 21 shots and 1.7 expected goals before Stam switched tactical approaches at halftime.

Many defensive issues in the first half came down FCC’s left side. Right-winger Tajon Buchanan, right back Brandon Bye and, often, attacking midfielder Carles Gil took up positions on the right in possession, outnumbering FCC’s defenders. During the course of the game, those three players combined for 25 shot-creating actions, per Football Reference. Because Rónald Matarrita was overloaded, Vallecilla often pulled wide, leaving gaps that were exploited. The closest midfielder, often Luciano Acosta, bears some blame for not contributing more, but positional defensive play is not a strength of any of FCC’s three starting central midfielers. Adam Buksa’s aerial prowess in the box troubled FC Cincinnati’s center backs, so allowing space for crosses on the FCC’s left side nearly resulted in multiple goals in the first half.

FC Cincinnati is still adjusting to the 3-5-2 in possession as well. Against Montreal, FCC struggled to play through an aggressive press. New England set up in a similar fashion on Saturday, but FC Cincinnati was more willing to play directly over the press. FCC mostly relied on their center backs, especially Vallecilla, to do that. Overall, Vallecilla was 3 for 12 on long passes, however it should be noted, one of those completions led to a great opportunity for Jürgen Locaida in the 19th minute.

On multiple occasions in the first half, Kenneth Vermeer played the ball short to Vallecilla, who looked up to see the New England press already set. Vallecilla would play the ball forward, presumably towards Locadia. Vallecilla’s delivery forward often didn’t give Locadia or Brenner a chance to challenge for the ball, and New England’s center backs and holding midfielders won the ball under no pressure and immediately cycled the ball back upfield to teammates already in attacking positions.

Compare the passing maps for FCC’s center backs on Saturday with the one from the match against Montreal. Cameron, Vallecilla and Stanko dramatically cut down on the number of short, horizontal passes they attempted, instead choosing to play forward more directly. Not allowing FCC’s center backs to be trapped in possession in dangerous areas is progress. But just playing the ball forward in the general direction of a forward leaves much to be desired.

Because opponents have found success against FCC when aggressively, we should expect that to continue until Stam figures out a more consistent way to advance the ball from defense to midfield. Asking Vallecilla to pick out long passes to teammates up the field does not appear to be the answer right now, however.

Stam’s tactical shift at halftime, returning to a 4-3-3 shape with Stanko stepping up into midfield, Allan Cruz pushed to the left wing and Locadia to the right, seemed to help both offensively and defensively. After the formation change, FCC limited the Revolution to six shots with a combined xG value of 0.26. Buksa’s eventual game-winning goal in the 70th minute was New England’s best opportunity of the second half going by xG, but it came from a set-piece opportunity.

The change in formation allowed Acosta to be on the ball in more dangerous areas while asking him to do less defensively. The map of Acosta’s passing locations in the first and second halves shows just how much more involved he was in attacking play in dangerous locations.

Acosta provides such a threat going forward, both carrying the ball and passing, in moments of transition. Finding opportunities where he can drive the ball forward and pick out passes should be the emphasis of the attacking system.

Following the goal, Álvaro Barreal entered the game, finally giving FCC a true winger on the field. Barreal made a major contribution as FC Cincinnati chased the game. He worked his way free in the box to put a shot on target and set up Brandon Vazquez for FCC’s most dangerous attack of the game. He also provided defensive help on the left wing, helping Matarrita cope with overloads.

Stam’s move to the a 3-5-2 seems like it’s an acceptance of a bend-but-don’t-break defensive strategy. Playing that way on the road in Florida against a team set up in a similar style is one thing. Continuing it at home against a team with one of the league’s premier playmakers is another. Though Buksa’s game-winning goal came off a set piece 25 minutes after Stam changed tactics, we shouldn’t ignore that New England pushed FCC to the limit in the first half and that most of the Revolution’s dangerous chances came against the more passive 3-5-2.

For the most part, FCC limited quality chances from New England (0.075 xG per shot), but when you concede 27 shots, the chances of conceding at least one goal is pretty high. If Stam chooses to continue with the 3-5-2 after the international break, he’ll have to figure out a way to limit how many shots FCC gives up. On top of that, he’ll have to devise a system that gets FCC’s most dangerous players on the ball in positions where they can succeed.

With a relatively long break between games, Stam has a decision to make: whether to further refine the three center back system, or return to the 4-3-3.