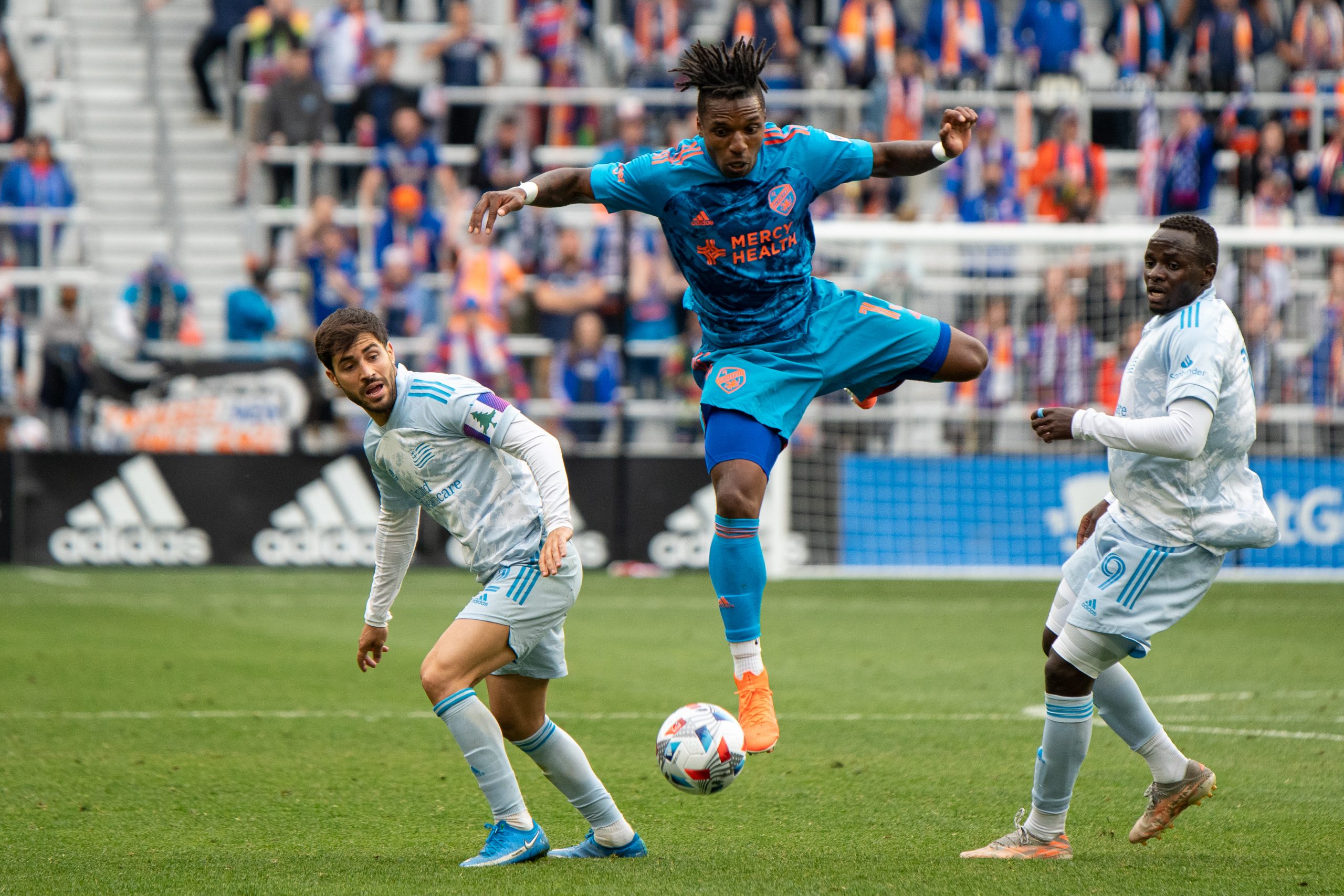 FC Cincinnati could not find an equalizer Saturday in a 1-0 loss to the New England Revolution at TQL Stadium.

It might not show in the scoreline every week, but the noticeable difference in FC Cincinnati between this year and last is the ability to continue to fight.

The Orange and Blue conceded on a 70th minute header from New England’s Adam Buksa but were not out of it until Geoff Cameron’s header went over goal at the final whistle Saturday in a 1-0 loss to the Revolution in front of a limited capacity crowd at TQL Stadium.

After climbing back from two goals down in the TQL opener and coming from behind to beat CF Montreal last week, FC Cincinnati (14th place, 1-4-1, four points) could not repeat the trick against the Eastern Conference-leading Revs (5-1-2, 17 points).

“We had that belief today,” said Cameron via videoconference about a potential equalizer. “We went a goal down, we pushed and we had some opportunities to get back in the game. For me that’s a good sign. We’re showing that we still have fight and we don’t want to give up.

“But saying that, we need to be a little bit deadly, more ruthless on both sides of the box.”

The club had a full active roster to work with for the first time this season, and coach Jaap Stam started all three designated players — another first this season, with Jurgen Locadia getting the nod up top alongside Brenner, repeating the 3-5-2 from last week.

Playing in front of a crowd that was essentially double the inaugural match affected FC Cincinnati early, Cameron said.

“The first 15-20 minutes we weren’t playing our normal way,” he said. “We were a little ambitious or anxious. We were playing in front of our home crowd and we want to get something going early. The fans — you want to give them something to cheer for, and I think that was maybe in our head a little bit too much — a little bit less composure on the ball.”

Each side had its chances in the first half. Yuya Kubo was active in FC Cincinnati’s midfield, and Locadia looked threatening in attack, creating a pair of chances. His best opportunity came in the 18th minute when he snuck through for a shot, but Revolution keeper Matt Turner was there for the save. FC Cincinnati was also disrupted a bit by a stingy New England press.

New England kept goalkeeper Kenneth Vermeer busy late in the first half. Vermeer reached up to swat away an attempt from Brandon Bye at the close of the half to keep the match scoreless. Vermeer totaled three saves.

The Revolution had 21 of its 26 shots in the first half. FC Cincinnati had 13 shots, most coming in the second half.

“If you combine both teams, you can say yeah they had more shots, but we had very good and very open opportunities to score in the second half,” Stam said. “You at least need to equalize.”

The match remained a stalemate until Kubo earned a yellow on a foul of Buchanan to the left of FC Cincinnati’s penalty box.

Carles Gil’s free kick found Buksa, who headed it past Vermeer for a 1-0 Revolution lead. Set pieces have been an issue for FC Cincinnati — the club has conceded seven such goals so far this season.

“After the break we changed a couple of things,” Stam said. “We get more into the game. The only frustration is we concede from a free kick. That’s very frustrating because you need to be determined to defend that.”

In the final 15 minutes, FC Cincinnati went into comeback mode.

Brenner grazed the top of the net on a shot that went over goal, and second-half subs Alvaro Barreal and Branon Vazquez forced Turner into two of his four saves. Locadia brought down a long pass, but Turner smothered it before he could get a shot off.

Cameron’s header, missing the corner of goal, was the last gasp.

With the upcoming international break, FC Cincinnati is off until a June 19 home match with the Colorado Rapids. Finally at full health, the club is making progress despite Saturday’s loss, Cameron said.

“We have very good players. I think we have a lot of potential,” he said.

“I think it’s going to take a little bit time, but we’re heading in the right direction. It was a great win last week but we’ve got to make our home field advantage. We’ve got to get results at home. That’s a given. That’s why we’re disappointed.”