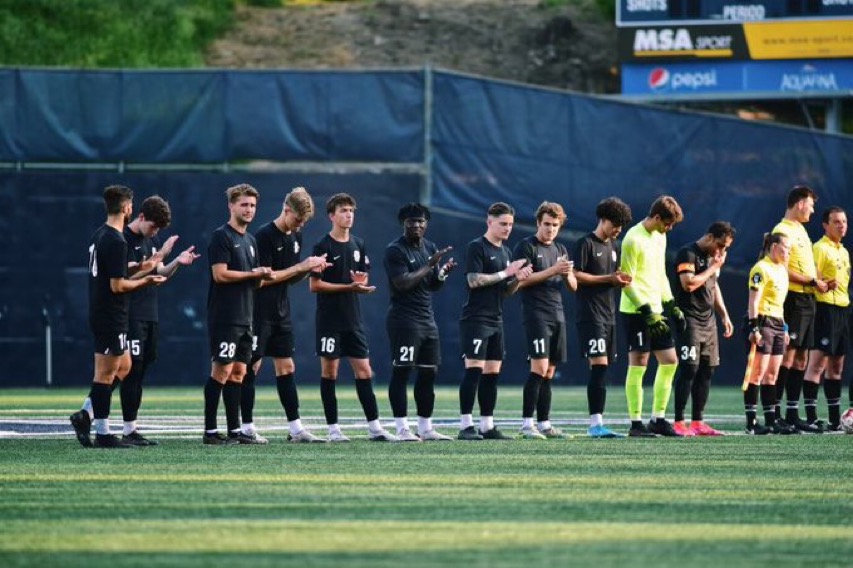 As a fan of the game, you often hear from non-fans say how they think a match that ends with no goals is boring. If that person was watching Tuesday’s match between the Flint City Bucks and Kings Hammer, it might be a match that changed their mind. Most 0-0 draws don’t have a lot of excitement, but this one had some very good storylines to highlight.

Scott Williams and the defense

Scott Williams’ performance in goal, earning his second clean sheet, was man-of-the-match worthy in this one. With Karson Kendall and Ethan Garvey both out of the lineup for various reasons, the backline was trying to find its footing. While it played a good match, without Williams, this could have been a very different match. We could be talking about how the Bucks came to town and stole three points.

Cue up the Proclaimers “I’m Gonna Be (500 Miles).” Anyone who’s spent time at an FC Cincinnati match when Kenney Walker played knows the cheer that goes along with that song. Even if they don’t realize it’s from that song.

There was tremendous pressure for Walker to perform in the match. The expectation for him to come in and dominate the match might be a little bit nostalgic, but as was heard last night “He’s Kenney Freaking Walker.” The fans seem to expect this team to dominate matches when Walker is on the pitch.

Walker carries himself differently than most of the players on the Kings Hammer roster. It’s not arrogance, but he seems to be harder on himself than anyone out on the pitch. He’s been there, done that, and now is passing on his knowledge to the next generation of players tiring to find their path to the pros.

You won’t find a more open and honest guy when talking about the game. Conversations with Walker are always very candid and to the point. His direction to the players on the field is the same. While he fell into a more defensive role most of the match against the Bucks, he showed that he can still distribute the ball very well and can still play at a competitive level. The squad will only get better when working with Walker, and we should continue to see improvement over the matches to come.

Where was Karson Kendall?

Karson Kendall was not in the 18-man matchday roster for the match against the Bucks. Kendall is in camp with the U.S. Virgin Islands national team as it prepares for the Concacaf World Cup qualifiers. USVI has matches on June 2 and June 5.

Kings Hammer FC contained Matthew Fearnley for the most part. He still took a couple of shots in his 80 minutes on the pitch.

Ids Hannema was also limited on the number of shots that he took in his 80 minutes. KHFC only saw one shot from Hannema in the match.

With both Garvey and Kendall out, the defense did well to contain the Bucks offense.

It was all yellow

Both teams had four yellow cards in this match. The referee for the match, Matthew Fotia, was getting flack from both benches during the match. Both teams seemed to have issues with the inconsistency in what was a card and what was not a card.

Braden Allen, Rodrigo Robles, Roberto Burlew and Walker all received cards for Kings Hammer FC. Robles was the only of the cards received for retaliation of a Bucks player fouling him after a dead ball. Avoiding cards for retaliation was a key to victory in our match preview.

It’s hard to put a post-match article together without talking about the work of Sam Robinson and Danny Barlow. Their work rate seems to continue to get better each match. While Barlow was a starter and sits at 344 minutes played in the four matches, Robinson came on and gave a solid 26 minutes off the bench.

Williams had his second clean sheet of the season and a man-of-the-match performance as mentioned above, but both Roberto Burlew and Cameron Territo also stood out against the Bucks.

Burlew leads the team in minutes with 345. He’s a very young and talented player who seems to get more and more comfortable with each match.

Territo came in at right back and put in a solid 62-minute shift during the match. Ryan Dougherty left the match early, bleeding from his mouth. The Western Illinois defender showed glimpses of offensive ability as well, as he made a number of great runs down the line to try and create some chances offensively.

Kings Hammer FC’s next match is 7 p.m. Friday at Grand Rapids FC. The Kings of the Queen City return home for their next match at Xavier at 7 p.m. on June 4.