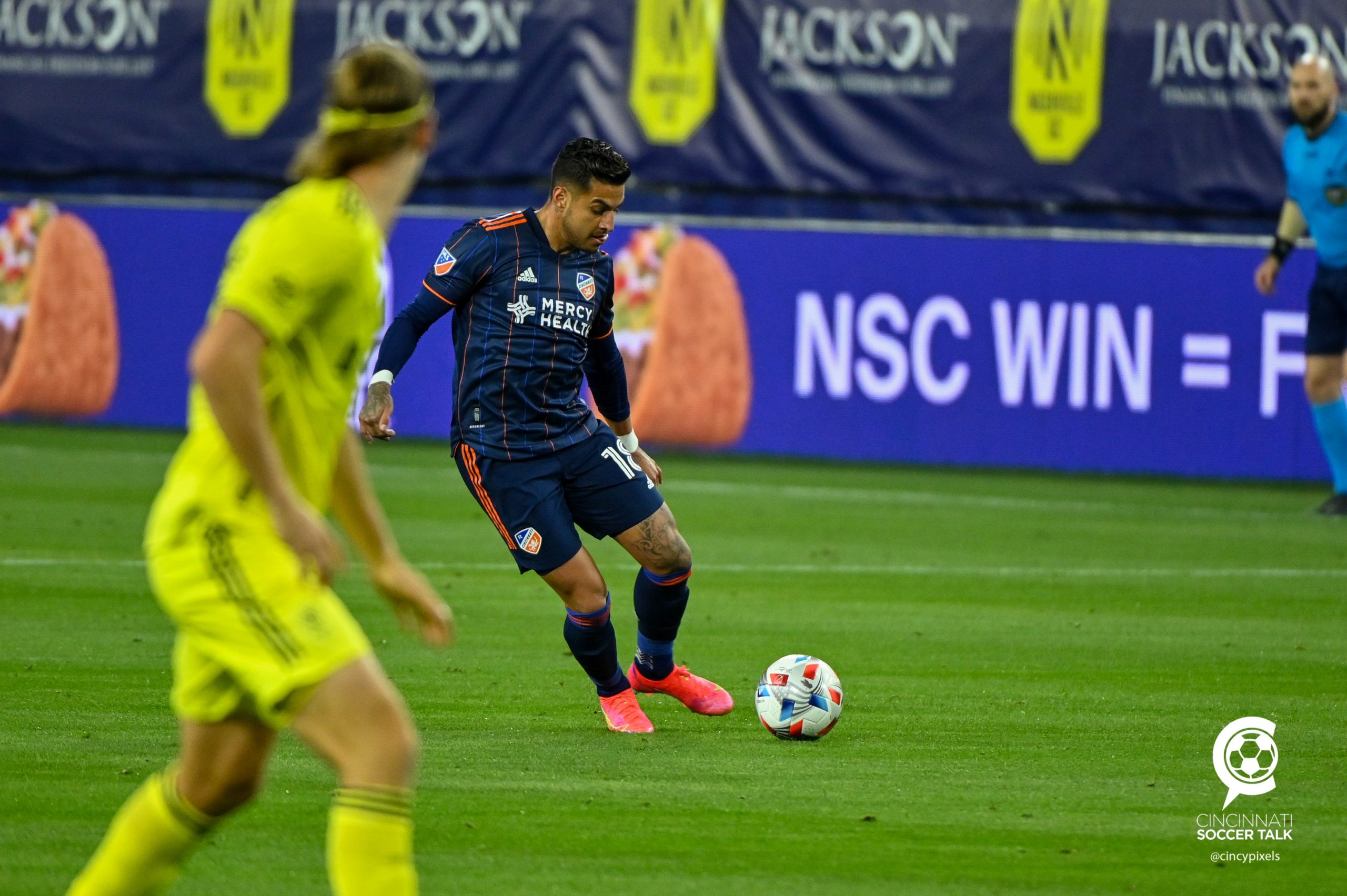 Guest author Nate Gilman dives inside the numbers in FC Cincinnati’s 3-0 loss at Orlando City SC. He says there’s definitely improvement needed but also points to some building blocks the club can utilize.

After another ugly-looking loss, 3-0 on the road, faith in Gerard Nijkamp and Jaap Stam’s iteration of FC Cincinnati seems to be waning among elements of the fanbase. Defensively, FC Cincinnati is still making basic mistakes that have been consistently costly. Couple that with a generally ineffective attack, and it’s clear why FCC’s results have been so disappointing and concerning. Looking back at the match as a whole, some of the major negative takeaways are similar to the first two matches, like problems with high pressure. However, FC Cincinnati improved in some key areas as well, most notably ball progression. That improvement obviously did not bear itself out in the scoreline or even the box score but it is a necessary building block to being a better team.

In terms of raw numbers per Football Reference, FC Cincinnati had its best match in terms of ball progression against Orlando. FCC completed 69 progressive actions, 30 more than in the previous match against NYCFC. Improved ball progression led to more touches in the attacking third, 106, compared to the 86 in the previous match. Yuya Kubo’s growing comfort playing as a central midfielder has helped. Against Orlando, Kubo completed a team-high 8 progressive passes. Jurgen Locadia provided a consistent outlet, successfully receiving 31 of 41 passes on the night, including 9 progressive passes. The fullbacks both showed their ability to help progress the ball in Stam’s gameplan. Joseph-Claude Gyau contributed 11 progressive actions and Ronald Matarrita chipped in with 7 more.

Similarly to the matches against Nashville and NYCFC, Orlando City’s press gave FC Cincinnati trouble. Orlando City pressed FCC 67 times in their defensive third and 99 times in the middle third of the field. When Orlando City set up to press FC Cincinnati high up the field, their 4-2-3-1 would shift to a 4-2-4. As the ball moved side to side, Orlando City’s front four would shift, looking to trap the ball on the sideline. Stam seems to ask his fullbacks to push higher during these phases of play. One pattern of play utilized by FC Cincinnati multiple times to beat the press involved Przemyslaw Tyton or a center back trying to chip the ball over the initial line of pressure to either Gyau or Matarrita on the sidelines. When completed, the fullback would lay the ball off to someone more central, play the ball up the line to a winger, or carry it directly upfield. However, Tyton and the center backs all missed those passes multiple times throughout the match, conceding possession or throw-ins in dangerous areas.

When FC Cincinnati looked like they would be dangerous was on the counter. A perfect example came in the 6th minute when FC Cincinnati cleared the ball before Orlando could set up a press. The clearance found Locadia centrally, who laid it off to Brenner, who found Isaac Atanga’s feet with a pass into what looked like a 1-v-1 situation with an Orlando center back. Unfortunately, Atanga couldn’t control it and Brenner was fouled shortly thereafter near the midfield line, a common theme throughout the night.

Orlando City committed numerous fouls near the middle of the field after FC Cincinnati had broken through their initial pressure, allowing their defenders and midfield to regroup into a deeper block. By my count, Orlando City conceded 9 fouls in or around midfield, many of them breaking up play after FC Cincinnati had passed through the press. The stoppage in play allowed Orlando to readjust defensively into a deeper block to which FCC had no answers.

For the first two weeks of the season, FC Cincinnati struggled to get the ball into the final third of the field. Against Orlando, FCC was able to get the ball forward but there didn’t appear to be much of a plan for the next phase of play — getting the ball into the box and generating shots. Despite possessing the ball much more in the final third, they still only managed 13 touches in Orlando’s penalty area. Jurgen Locadia and Brenner were tasked with doing too much of the progression. Both players dropped deep to carry or receive the ball from the backline or a deep-lying midfielder. Brenner was on the ball more against Orlando City but not where FC Cincinnati supporters would like him to be. Brenner’s 46 touches were a season-high but 37 came in the middle third of the field with just 6 in the attacking third. His two shots were both taken more than 25 yards from goal, and according to his touch map, those two shots were the closest touches to the goal he took during the match.

Alvaro Barreal was FC Cincinnati’s most effective player in the attacking third. He was targeted with 40 passes, successfully receiving 37, including 6 progressive passes. His 22 touches in the final third led the team. Barreal’s nine progressive carries led the team as well. However, because Locadia and Brenner were forced so deep to receive the ball, Barreal was isolated when he had the ball. Because Stam sets his wingers up to play inverted, that is a left-footed player on the right wing and vice versa, FCC should rely on its fullbacks to overlap to provide width. FC Cincinnati has rarely looked to cross the ball into the box under Stam. In 2021, FC Cincinnati ranks last among MLS teams, attempting just 20. In 2020, FCC attempted 188 crosses in 30 matches, 32 fewer than Vancouver. Teams don’t need to cross the ball to be successful but FCC’s lack of width and danger from wide really limits their options around the box. Ronald Matarrita showed he could be dangerous from advanced areas on the left playing for NYCFC and Joe Gyau’s ability to beat his man with a dribble could present similar issues on the right. Whether it’s a chemistry issue or a tactical one remains to be seen.

Because FC Cincinnati managed very little during its sustained possession in Orlando’s half, more often than not, the ball went backwards, usually ending up all the way back at Tyton’s feet. Then the cycle would repeat itself, with the Orlando City press, and FCC’s attempts to play through, starting again.

FC Cincinnati’s lack of comfort and familiarity around the box shouldn’t be too much of a surprise. Two of the team’s four main attacking options, Atanga and Brenner, were either making debuts or playing in unfamiliar positions. Also, the game against Orlando was really the first time they’d had sustained possession in the attacking third. As the team gets more training and game time, we should expect to see a better idea of how exactly they want to deliberately attack the opposition as well as better chemistry between the players.

Looking forward to the next few matches, it will be very interesting to see how Stam sets his team up to continue beating the press. Relying on Tyton and the team’s center backs to make line-breaking passes consistently seems like a bad bet. When faced with pressure, FC Cincinnati must develop alternatives, whether it’s playing direct, dropping a midfielder deeper to provide additional options and passing angles, or something else entirely. Luciano Acosta’s return, whenever it happens, should help too. His ability to receive the ball, turn, and drive at a defense will be another very useful quality, letting FC Cincinnati’s attackers make dangerous runs at the opposing goal. A midfield featuring Acosta and Kubo, assuming his ball progression numbers are an indication of things to come, should put FC Cincinnati’s attacking options in much better positions to succeed.