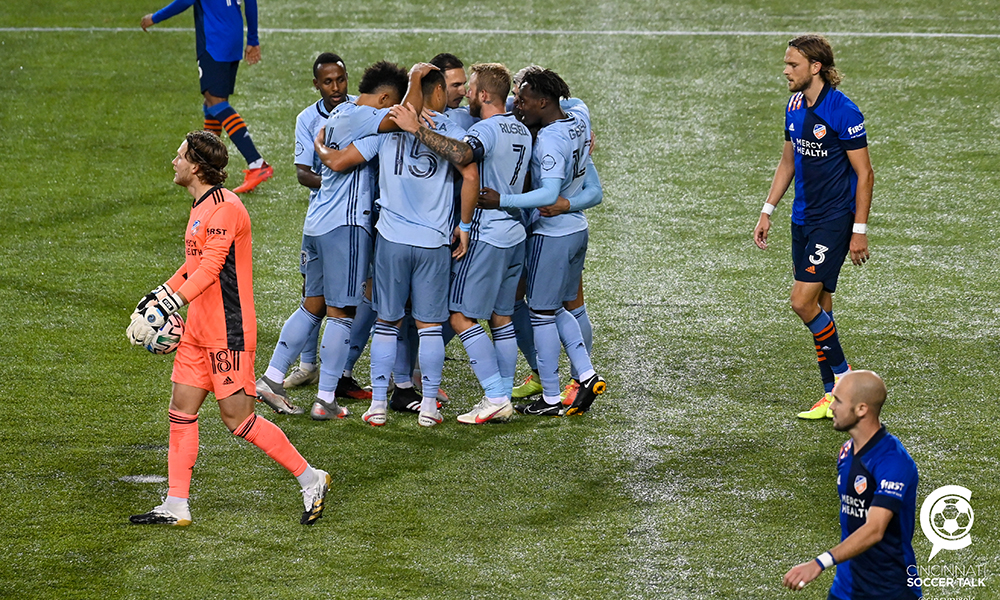 On a night where FC Cincinnati had chances, their farewell to Nippert Stadium didn’t go as hoped as they fell to Sporting Kansas City 1-0.

On a night that the begged for a fairy tale ending, FC Cincinnati once again failed to deliver in their final match at the University of Cincinnati’s Nippert Stadium with a 0-1 loss to Sporting Kansas City on Wednesday.

The match marked the end of a mostly storied five-years at Nippert for FC Cincinnati, who will move to the new soccer-specific West End Stadium in 2021. And though the hosts dictated much of the play in the match, they were again left disappointed by an inability to finish their chances.

Instead, it was halftime substitute Roger Espinoza that would grab the lone goal of the match in the 57th-minute for Sporting KC. The finish, which capped off a centered ball from Alan Pulido on the left, caught a slight deflection off of Cincinnati defender Tom Pettersson on the way into Spencer Richey’s goal.

“I can only say that it’s unbelievable that we’ve played many games and it’s unfortunate that you don’t get the results that you deserve,” shared FCC manager Jaap Stam in the post-match video press conference. “Do we deserve them? Because we missed the opportunities ourselves. You give away a game. They come out once and they score a goal. We get several, several opportunities and we can’t finish them off — so that’s a pity.”

Of course, Cincinnati had their opportunities, too. The most obvious of those came just six minutes after Espinoza’s opener when Frankie Amaya earned a penalty following a mistimed challenge from Roberto Puncec in the Sporting box. However, Dutch midfielder Siem de Jong saw his kick from the spot careen off the upright and fail to pull his side level.

De Jong also placed a clearcut chance from just outside the 6-yard box over the bar in the opening minutes of the match.

“You get a penalty, you need to finish that,” Stam continued. “But for some reason, we can’t get it in the back of the net. That’s unfortunate because we can say a lot and we complain about things, of course, but we need to look at ourselves because in a lot of home games we gave it away ourselves.”

On a night that ended in disappointment for fans of the Orange and Blue, the 90th-minute likely gave most fans of the club something to smile about. Long time winger Jimmy McLaughlin, the last remaining player from FC Cincinnati’s inaugural season in 2016, checked into the match for the first time this year. It marked the first time “Pennsylvania Messi” has seen the pitch for a match since the end of the 2018 season after sitting out last year recovering from knee surgery.

The loss sees FC Cincinnati (4-13-4, 16 pts) slip to last place in the Eastern Conference. It marks the seventh time in nine home matches that the Orange and Blue have failed to score in the pandemic-shortened 2020 season.

FC Cincinnati will begin it’s first of two road trips to end the year on Sunday when they travel to the side just ahead of them in the table, Atlanta United.