In this version of Talking Tactics, Brad Gough looks at the way Brandon Vazquez changes the FC Cincinnati attack.

FC Cincinnati fans are divided on the subject of young American striker Brandon Vazquez. Some argue for his inclusion in coach Jaap Stam’s starting XI, citing the team’s lack of offensive output. Others believe he is not good enough to feature for any MLS squad, much less one that has struggled as much as the Orange and Blue. Like it or not, Vazquez started and played the entirety of the match against the New York Red Bulls on Saturday. Even if his presence didn’t directly change the outcome of the match, it certainly affected the way Jurgen Locadia and the rest of the team played.

Unlike Yuya Kubo, Siem de Jong or Adrien Regattin before him, Vazquez is an out-and-out center forward. Because of this he often takes up a position high on the field and presses the opponent’s center backs toward their own net while his team is in possession. The image below shows Vazquez’s movement causing the Red Bulls right center back to sag backward, creating a huge gap between the midfield and the backline. 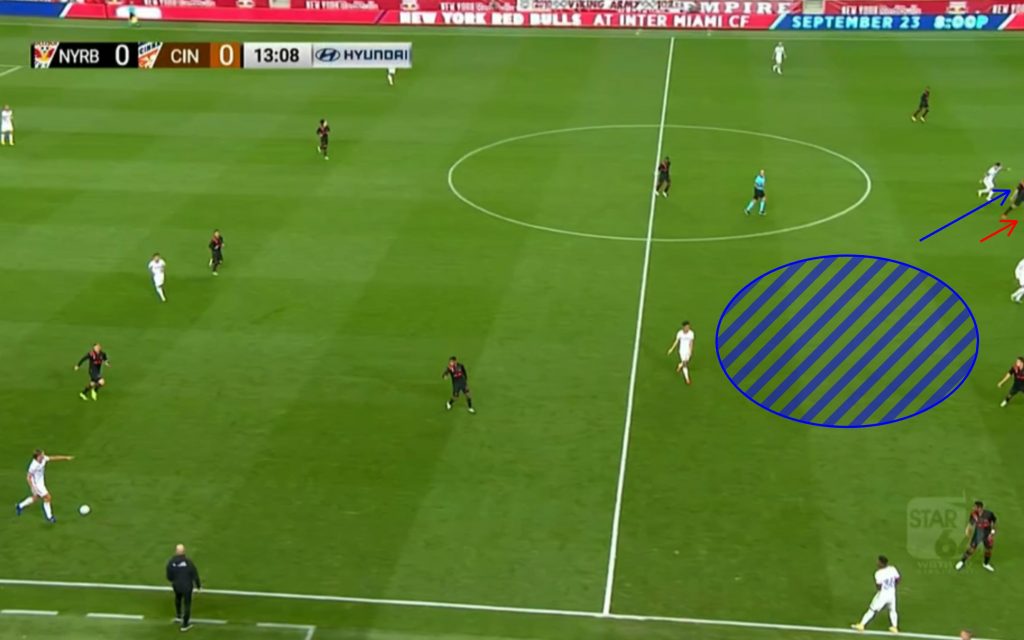 Often during the match, Vazquez pressed high, allowing Locadia to check back into the space that was created. Here, Locadia easily finds the separation from the Red Bulls left center back to receive the pass from Nick Hagglund. 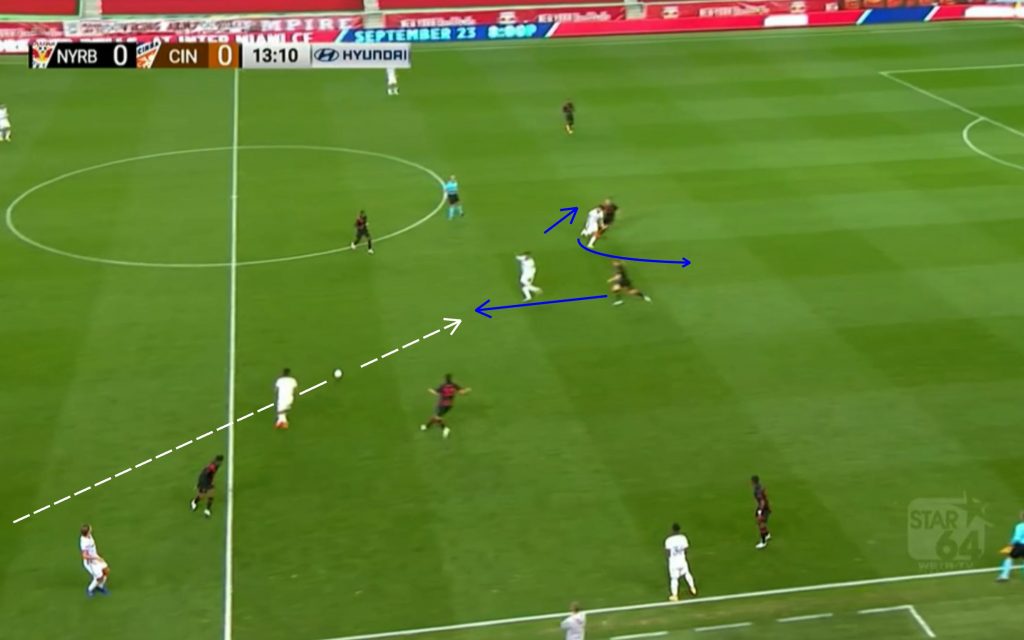 Another way that Vazquez created space for Locadia was in his tendency to make runs in behind the Red Bulls defense. Here, as Andrew Gutman carries the ball up the left touchline, Vazquez surges down the line, again drawing attention from the opponent’s back line and creating a large gap between the lines. Locadia was drifting toward the back post as the play was developing. 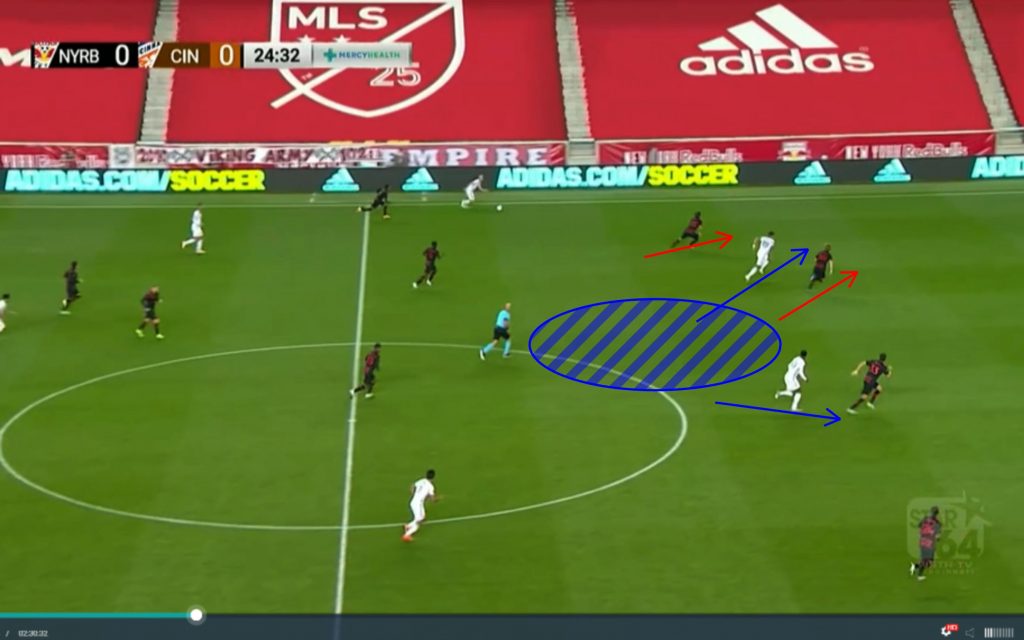 Seeing the gap created by Vazquez’s run, Locadia changed his course and once again got on the ball between the Red Bulls lines. 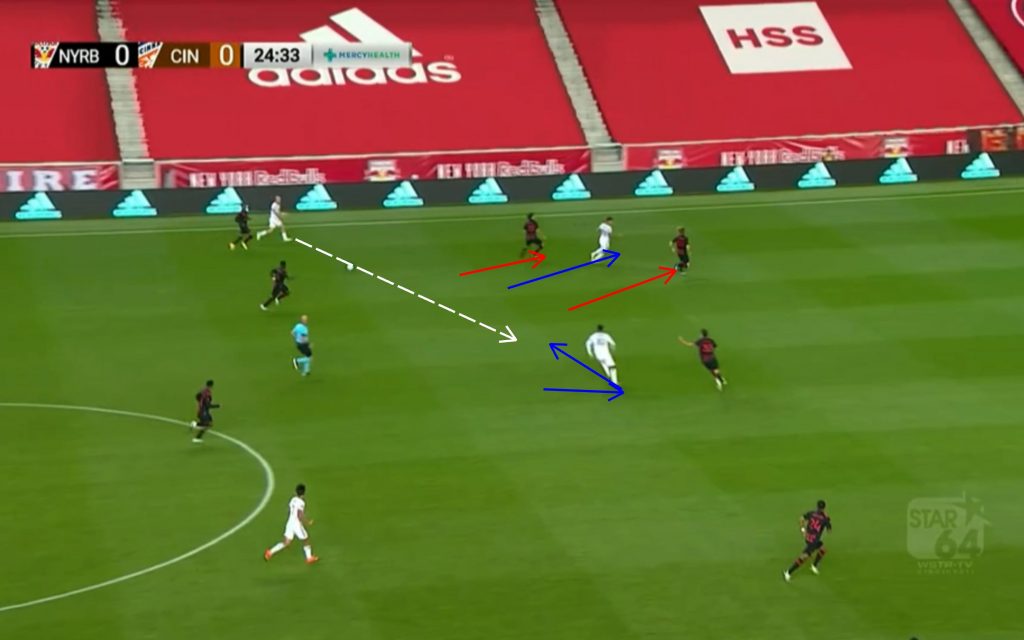 This was a frequent occurrence throughout the match, and one we haven’t seen with other strikers up top. Locadia got on the ball 46 times during the match, equaling his season-high. In the preceding matches Locadia’s touches clocked in at 36 (New York City FC), 28 (Columbus), 46 (Chicago), 30 (Columbus), and 33 (D.C. United). His touches not only increased but he picked the ball up much more frequently in the center of the pitch. His heat and touch maps below illustrate how his involvement increased between the NYCFC and NYRB matches. 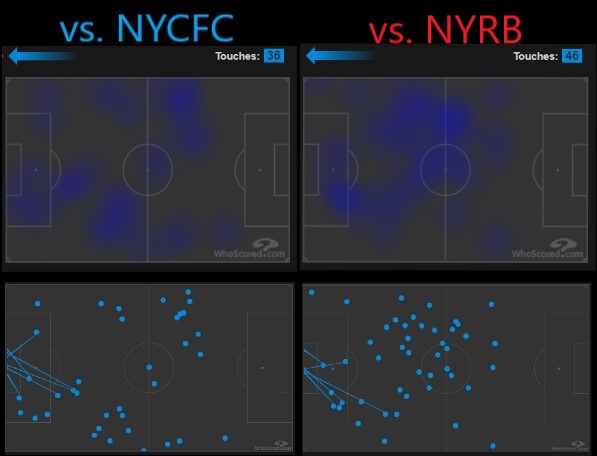 Vazquez Wants to Get Into the Box

When the other cast of characters that have partnered with Locadia play, they tend to break off from the forward line and operate in what coaches call “the hole.” This is the space just behind the central striker that is typically occupied by a creative midfielder. Vazquez, in contrast, wants to get into the box to get on the end of crosses. At Vazquez’s size (6-foot-3, 174 pounds), he provides a big target for long balls or crosses. This alone is enough of a difference to change the way FCC plays, but his desire to get on the end of these types of passes also allows the rest of the team to operate in the space he creates.

Here you can see a play where goalkeeper Premyslaw Tyton played a long ball toward Vazquez. The striker moved under the flight of the ball and chested it back to the oncoming Kubo. The rest of the FC  Cincinnati team, in turn, transitioned to offense. 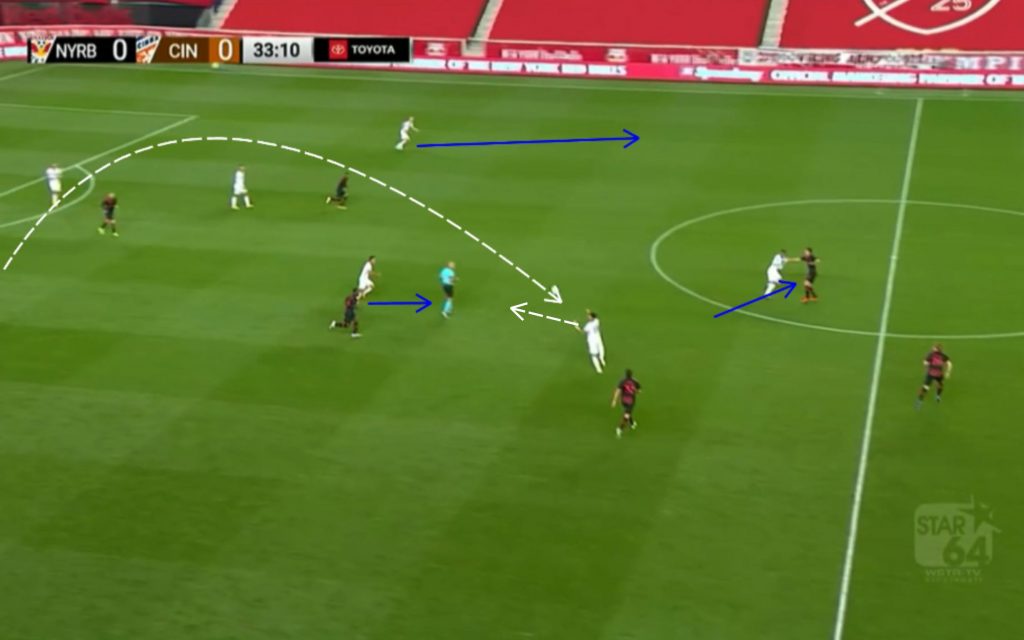 Kubo shifted the ball wide to Gutman and continued his run forward. Locadia pressed the Red Bulls backline, creating space for Gutman to surge into. Vazquez trailed the play. 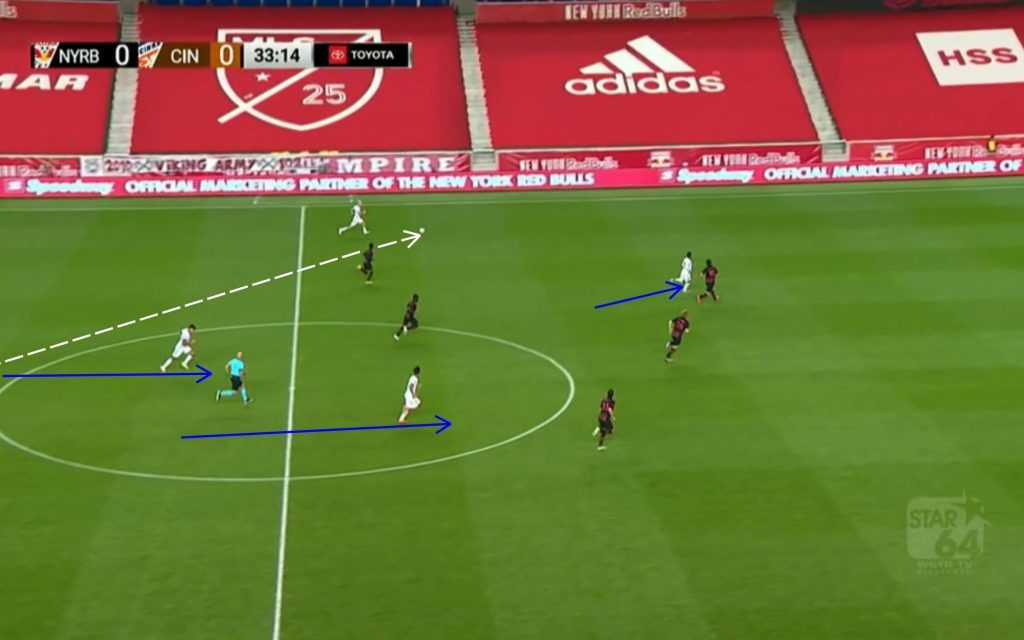 This is where things got interesting for the big American. Instead of trailing the play and looking to be a direct option in possession, he started to drift his run to the back post. This pulled two Red Bulls defenders toward him, giving FCC a 3v3 in the immediate area of the ball and drawing a fourth Red Bulls defender over to help. Gutman shifted the ball back to Haris Medunjanin, who played a ball into the corner for Locadia to chase. 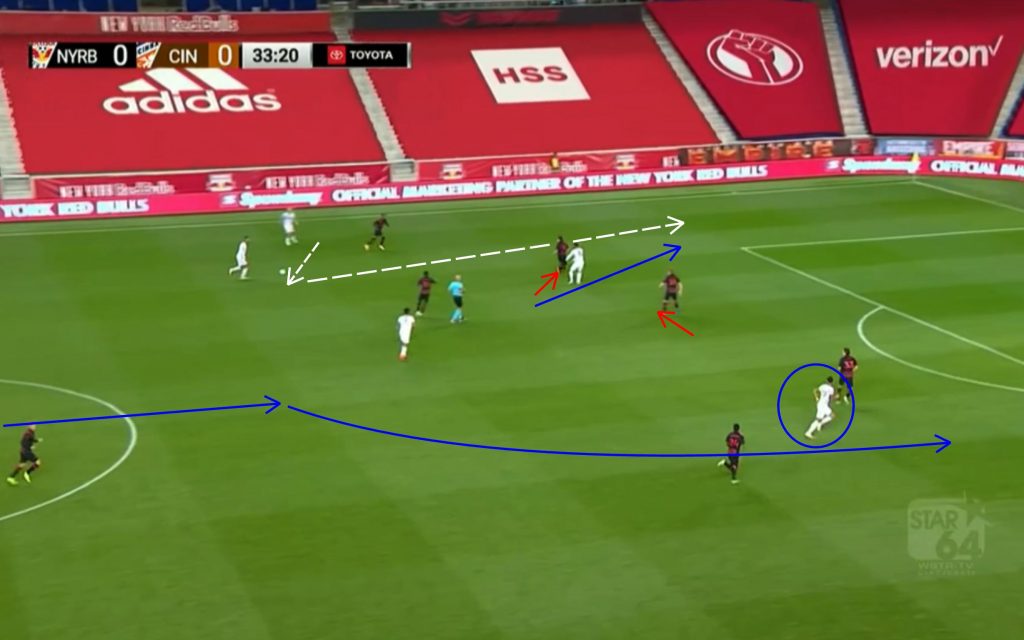 Locadia created space with his run and found a cross that Vazquez headed into the back of the net. Unfortunately, his lack of experience showed, as he had drifted into an offside position. The idea was right, however. By making his run to the back post he not only created space for his teammates to work the ball forward but presented a target in the box for the final product.

If He Can Put it Together…

The combination of his movement, target play and starting position certainly allowed his teammates to get more involved in the areas of the field that suited them. However, Vazquez still left a lot of opportunities on the field that could have led to breaks for the Orange and Blue. Too often his touch let him down or he wasn’t able to pick out the right pass. He completed a miserable 54% of his passes and only 40% in the attacking third of the field. In all, he was credited with 16 ball losses.

Though it does no good to take up a good starting position and provide a good target if you can’t hold onto the ball, the sequence below shows the kind of potential Vazquez can add if he puts it all together. After drifting to the ball side and checking into space to receive a pass from Tom Pettersson with four players open on the weak side of the field, the team looked well-positioned to create a great opportunity to break. 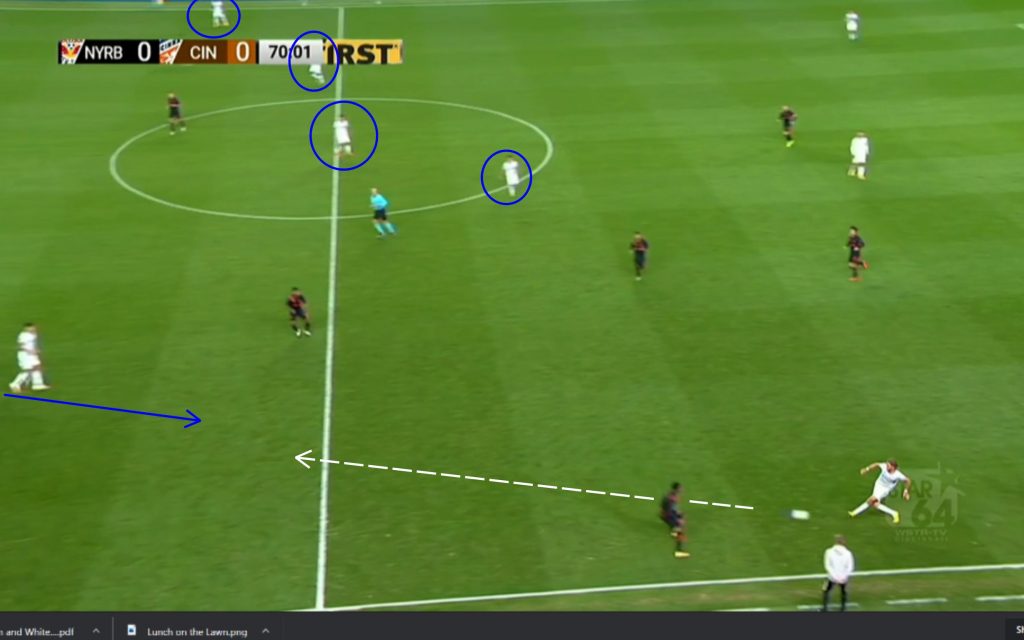 However, under pressure from the Red Bulls defenders, Vazquez couldn’t get the ball out of his feet. He took three touches before being dispossessed. Had he been able to find a teammate in the center of the pitch, or even simply play the ball back to Pettersson for him to switch the play, FCC had a 4v2 opportunity on the right side. As it stood, the opportunity was left wanting and the Red Bulls went back on the attack. 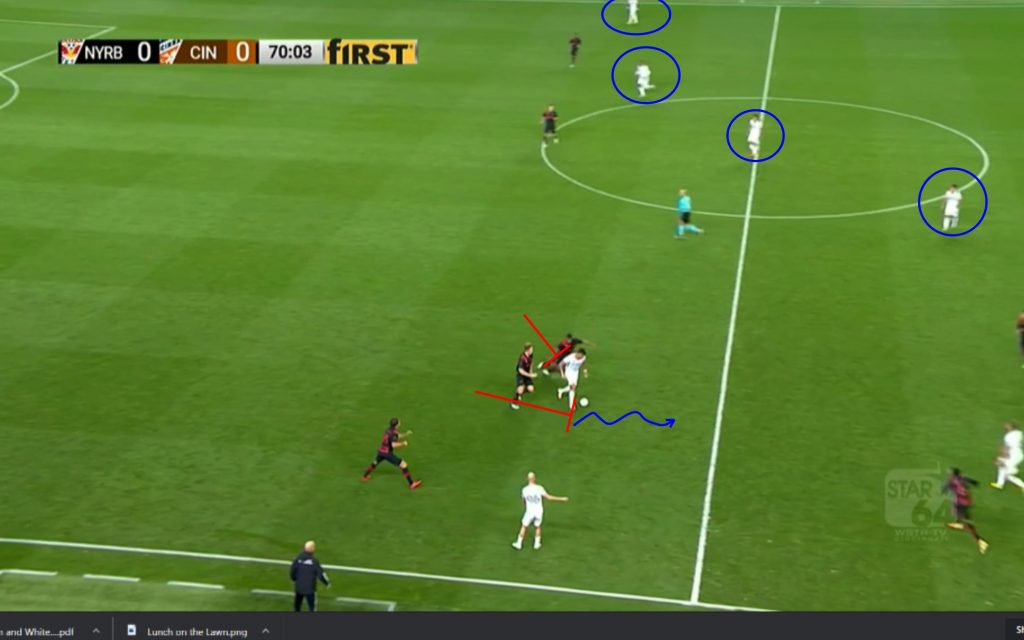 The introduction of a big, target forward to pair with Locadia opened up the match for Stam and FC Cincinnati. Vazquez’s particular sense of urgency and energy was certainly a welcome addition as well. However, his turnovers, poor touches and inability to finish on either of his two fairly good chances left his doubters with ammunition.

In my opinion, Stam needs to get Locadia some help on the offensive side of the pitch. Whether that is starting a target forward like Vazquez alongside him, instructing a more mobile forward like Kubo to take up higher starting positions and get in the box more frequently or moving to a 4-3-3 to spread defenses out along the width, this team looks better when center backs can’t solely focus on Locadia.