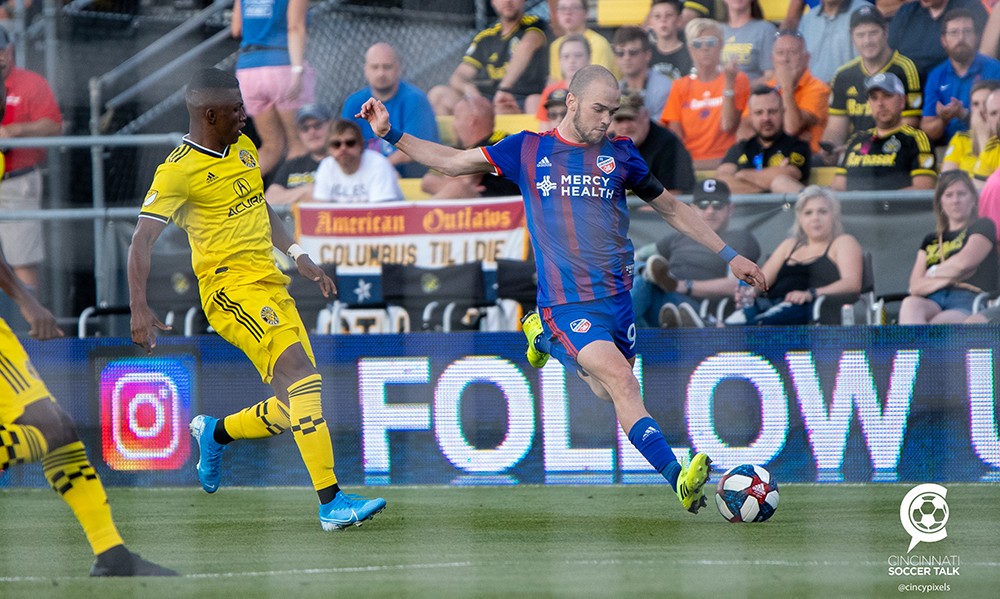 MLS has relaxed its travel restrictions during the COVID-19 suspension, allowing Andrew Gutman to return home to Hinsdale, Illinois. But players born outside the United States are still not allowed to return to their native countries.

When the MLS season was paused and social isolation became a mandate, Andrew Gutman had a decision to make.

The FC Cincinnati defender could remain in Cincinnati where he lives alone and wait out the COVID-19 pandemic or he could travel to his hometown of Hinsdale, Illinois, a west Chicago suburb, where he could be close to his parents and family.

Sounds simple, right? Not in MLS.

The league is requiring its players to remain in their club’s home cities during the pandemic, in hopes that the training moratorium would be lifted and the season would resume. But with the moratorium extended until at least April 24, MLS relaxed its travel rules — a bit.

“While MLS players are expected to remain in each club’s respective market, MLS will review individual requests by players to relocate to another market by car, taking into account the totality of a player’s situation,” the league announced.

So Gutman had to fill out a form providing the league with details of his trip — where he was going, his living arrangements and the specific reasons why he wanted to leave Cincinnati.

“I didn’t want to be alone for a couple months,” Gutman said, on a video conference call with media on Tuesday.

He had to provide assurance that his current training and treatment requirements could be met and that he wasn’t going anywhere considered to be a coronavirus “hot spot”.

Gutman was granted approval, but with a catch. He couldn’t fly. Or take a train or bus. Or rent a car. He was required to drive in his own personal vehicle.

For him, it was worth jumping through some hoops.

“I’m not from Cincinnati,” Gutman said. “Being able to get back to Chicago and spend time with my parents and my family is definitely something that’s been a positive for me. I haven’t been able to do that the past couple years.”

Gutman, who is on loan from Scottish Premiership side Celtic, also had to check in with his parent club, letting them know he was in a good environment where he could stay on track with his fitness plan and be safe.

For his own mental well-being, Gutman felt like home was the best place to be. But the majority of FC Cincinnati’s players weren’t as fortunate.

MLS players also are not allowed to travel outside the United States or Canada during this period, leaving most of FCC’s players stranded in Cincinnati, away from friends and family at a worrisome time.

For international players who live alone, that can be difficult. Although defender Maikel van der Werff found them a silver lining.

“I message some guys who are alone,” van der Werff said. “It’s hard for them, but they have more time to play PlayStation. And that’s what they do.”

Van der Werff, a native of Hoorn, Netherlands, is in Cincinnati with his wife and two young children. He’s able to help his oldest child with homework and take daily walks with his family. It’s cherished time that he rarely would get this time of year with the season normally in full swing.

But van der Werff also is a long way from home with his country in the grips of a historic pandemic. Just last week, according to the New York Times, COVID-19 cases rose 16% to 7,431 in the Netherlands with 434 deaths.

Social distancing is being strictly enforced in van der Werff’s hometown, where people have been fined for not staying 1.5 meters apart (approximately five feet). According to reports, some were being ticketed in Amsterdam for being outside at all.

“We are in touch with all our friends and families,” van der Werff said. “They are doing well. I think they are more strict in the rules about keeping distance. They are closing everything. The virus was there a bit earlier than it is here. I think we can expect what was happening over there to be here (in the US). In Europe it was really bad.”

Gutman said things are changing quickly in Chicago as well. As of Sunday, there were 14 cases of coronavirus reported in Hinsdale. Gutman said some of the parks where he regularly works out are now closed.

“It’s how it is everywhere,” he said. “Shops are closed. I went to work out in a field here, and they started closing all parks and public places. I feel like it’s getting stricter here.”

To keep spirits high, FCC players are turning to each other. There hasn’t been a video conference call yet where the subject of the team WhatsApp chats hasn’t come up. It’s an even more appropriate topic with Gutman present, since he’s the guy most players say takes the brunt of the jokes.

But this team bonding isn’t something new, Gutman says. And it has continued throughout the hiatus, albeit remotely.

“In the locker room there’s a really good culture and a good environment,” he said. “Our team’s pretty close. There’s a lot of new guys on the team. But when this break happened, we were getting closer as a group.”