In this version of How They Happene, Brad Gough breaks down all five goals in FC Cincinnat’s 3-2 loss Sunday at the New York Red Bulls.

FC Cincinnati opened the season on Sunday with a respectable 3-2 road loss at the hands of the New York Red Bulls. After falling behind 2-0 early, it made some adjustments to keep the game close and even threatened to pull even. Here is a look at how all the goals happened.

Much of the opening 15 or so minutes saw FCC struggle to control the midfield. With Frankie Amaya and Allan Cruz both pushing forward and Haris Medunjanin left as the lone defensive midfielder, Red Bulls found a lot of joy operating in the space just in front of the FCC back line. 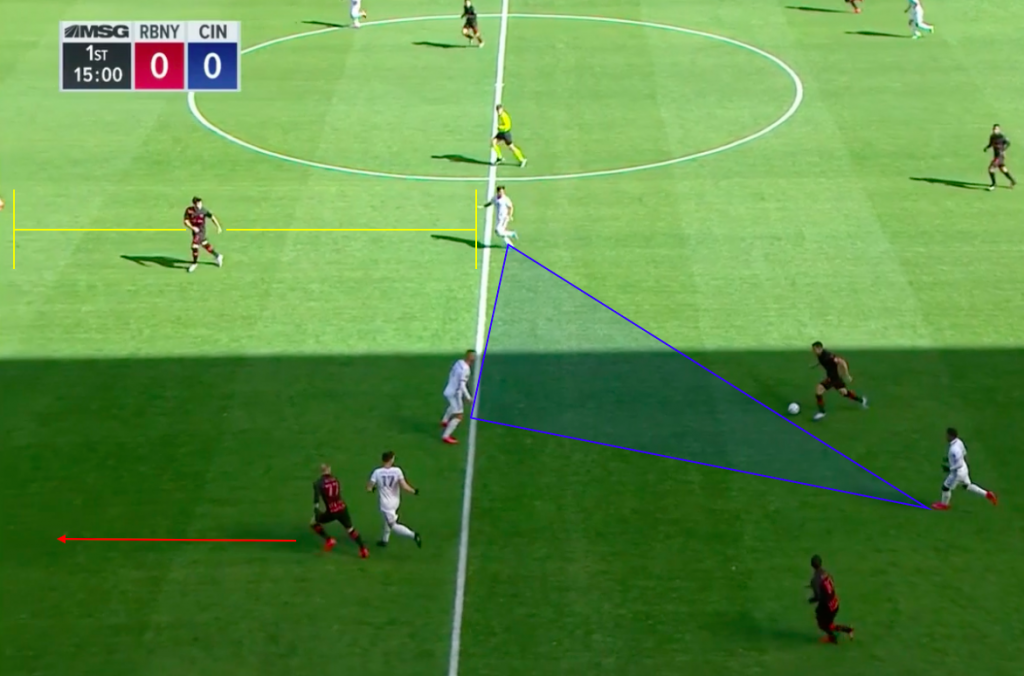 Red Bulls shifted the ball wide to Kaku, and Mathieu Deplagne was forced to step forward. This caused the FCC back line to all shift ball side, leaving Greg Garza at left back with a lot of space to account for (red bracket below)

Without a holding midfielder present to drop in and help Garza, he was a bit slow to pinch on Valot, who easily received a pass from Daniel Royer, turned and found a streaking Kyle Duncan who should have been marshalled by winger Kubo (red highlight). 1-0 Red Bulls. 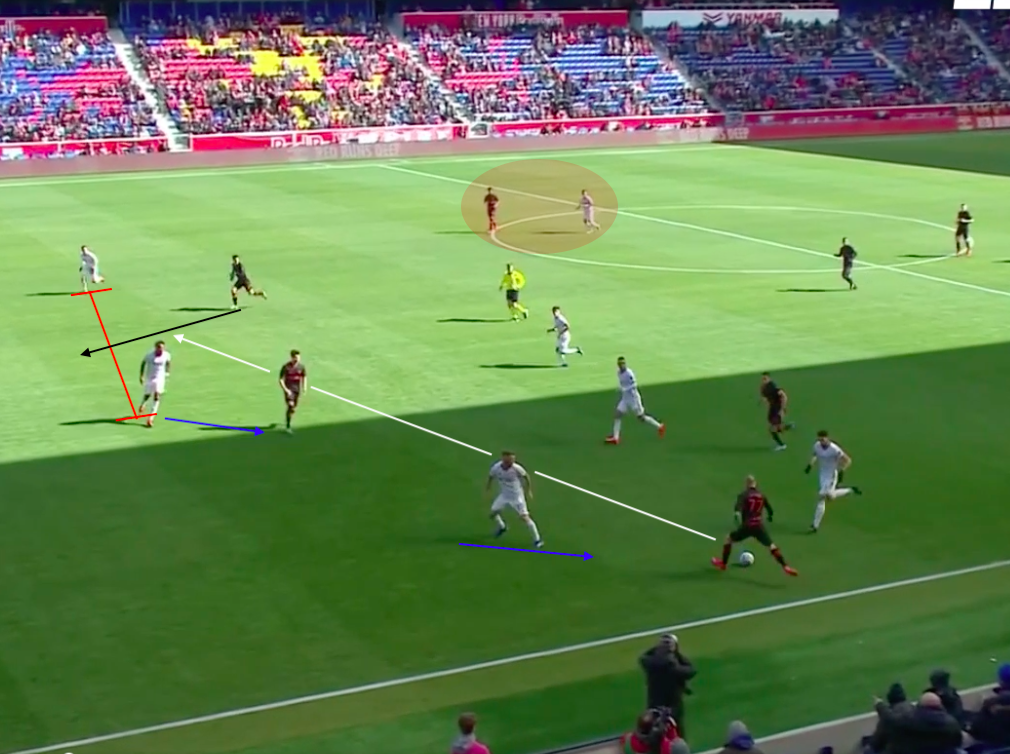 Red Bulls doubled their lead thanks in part to some shaky build up play from the Orange and Blue. Deplagne was forced to play a negative pass to goalkeeper Spencer Richey, who struggled to put much power behind his left footed clearance. From there, a mixture of Deplagne taking a poor angle in retreat leaving two Red Bulls players open (blue highlight), and Medunjanin lacking the quickness to drop into the passing lane (yellow highlight), allowed a clever run from Kaku and an even better pass from Valot to make it 2-0 Red Bulls. 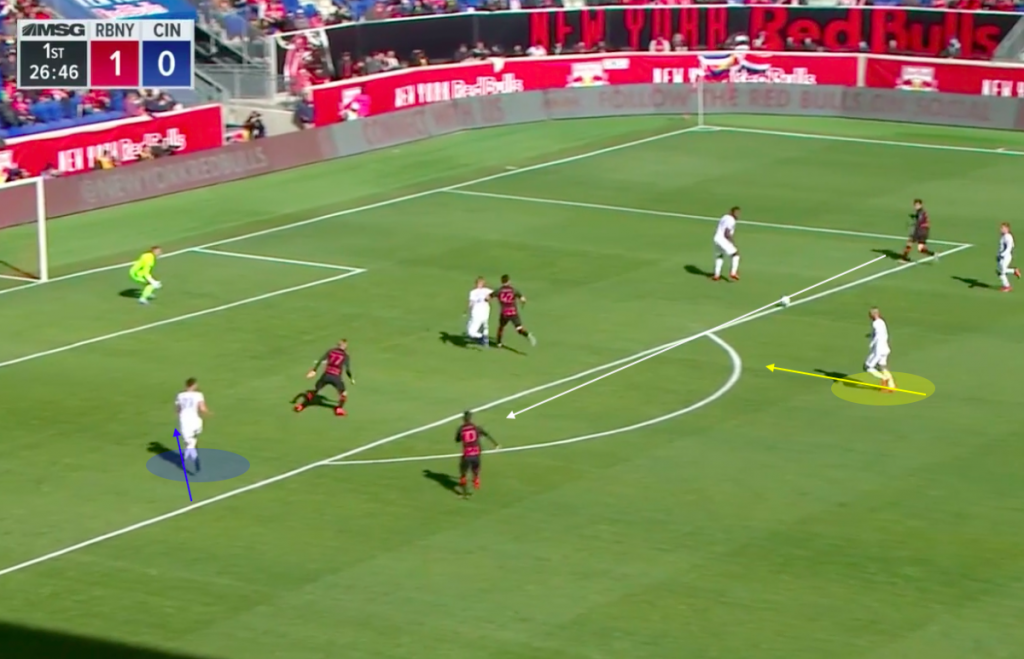 It was clear from the whistle to open the second half that FC Cincinnati was not going to roll over. Amaya opened the half playing a bit deeper alongside Medunjanin and generated a turnover and transition opportunity. 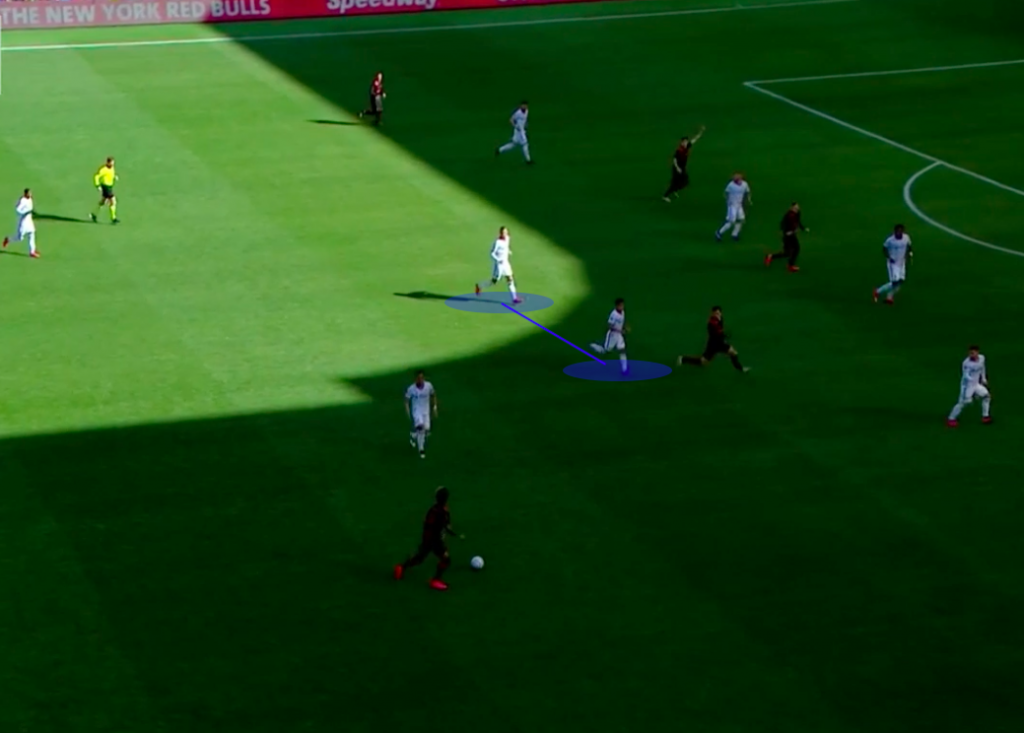 This goal was born out of pure counter attacking play. As the ball found its way to Medunjanin, he played a simple pass to Amaya, who found Garza already sprinting up the sideline. Brandon Vazquez and Cruz recognized the transition opportunity and sprung forward immediately. 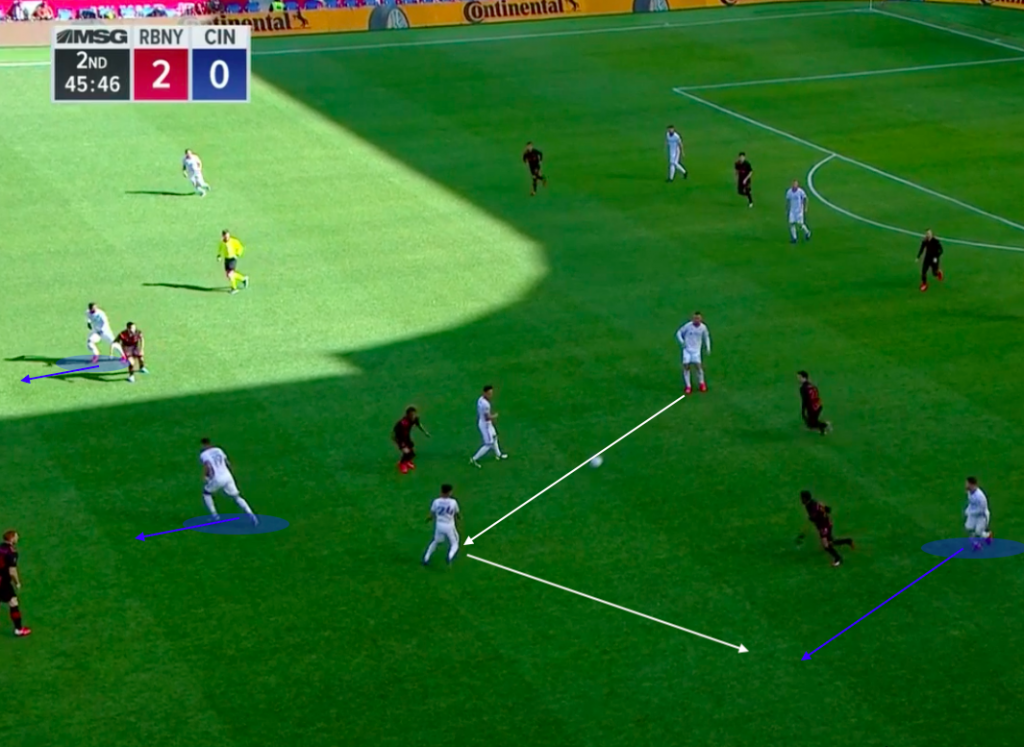 Garza picked a beautifully weighted pass to Vazquez, who had expertly peeled his run toward the sideline, between the Red Bulls center backs. 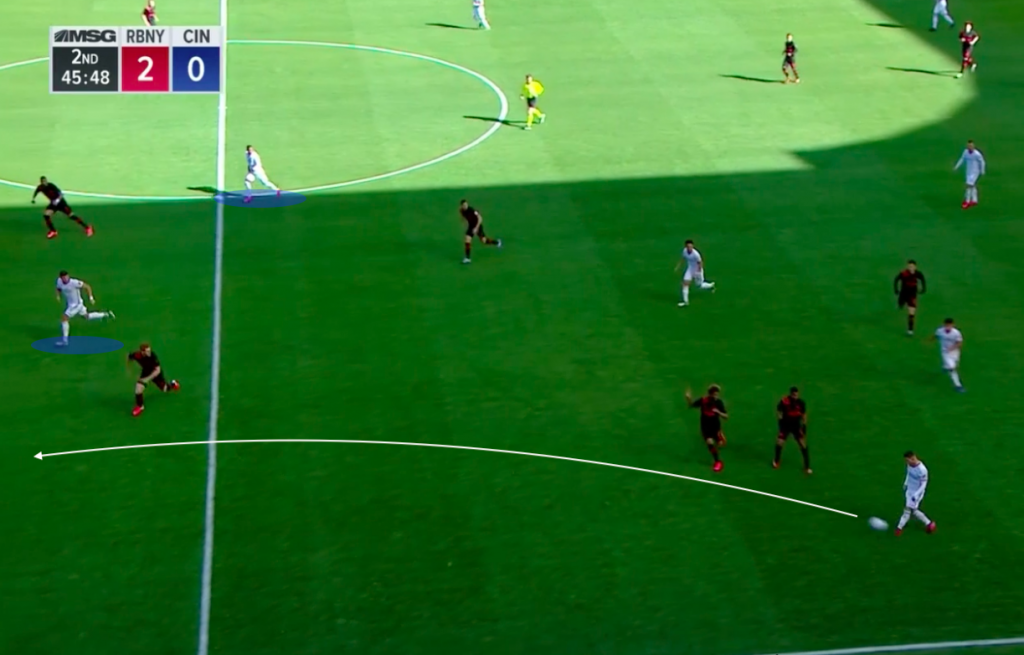 Finally, Vazquez’s patience was a thing of beauty. Rather than sprinting directly to goal, he shifted the ball back to his right foot, causing Red Bulls center back Amro Tarek to shift his weight forward. Then Vazquez quickly accelerated toward goal, leaving Tarek off balance, allowing a slotted pass to Allan Cruz for FC Cincinnat’s opening goal of the 2020 MLS Season. 2-1 Red Bulls. 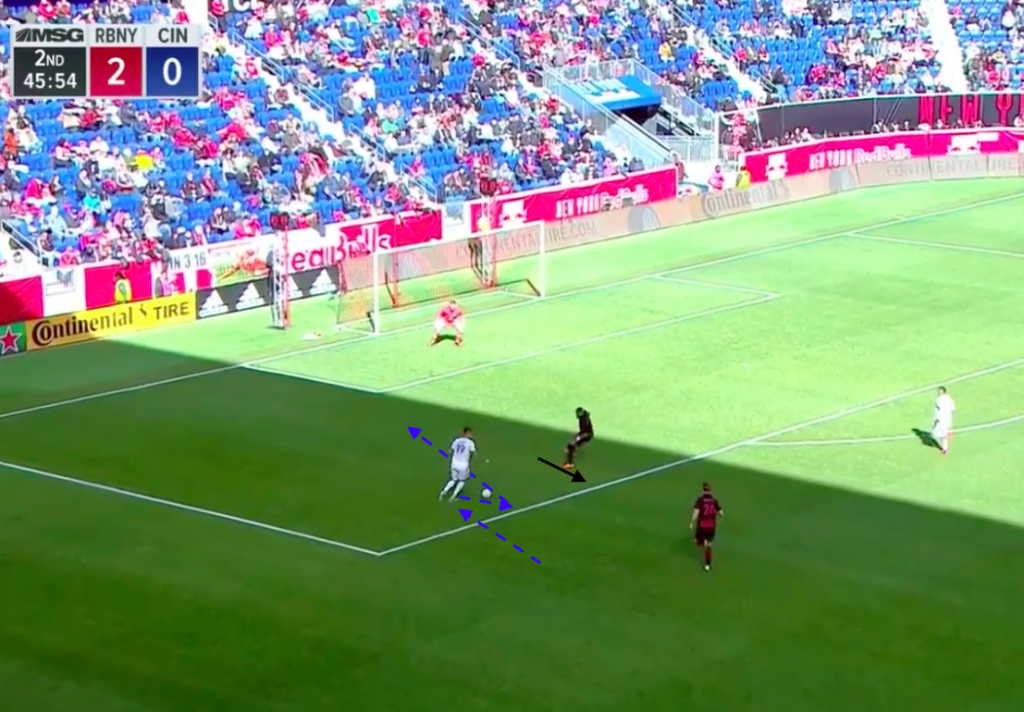 Despite the second half adjustments to keep Deplagne a bit more reserved and pull Amaya back alongside Medunjanin, in the 70th minute the Orange and Blue were caught out. Amaya and Cruz both pressed forward while Deplagne overlapped on the wing. 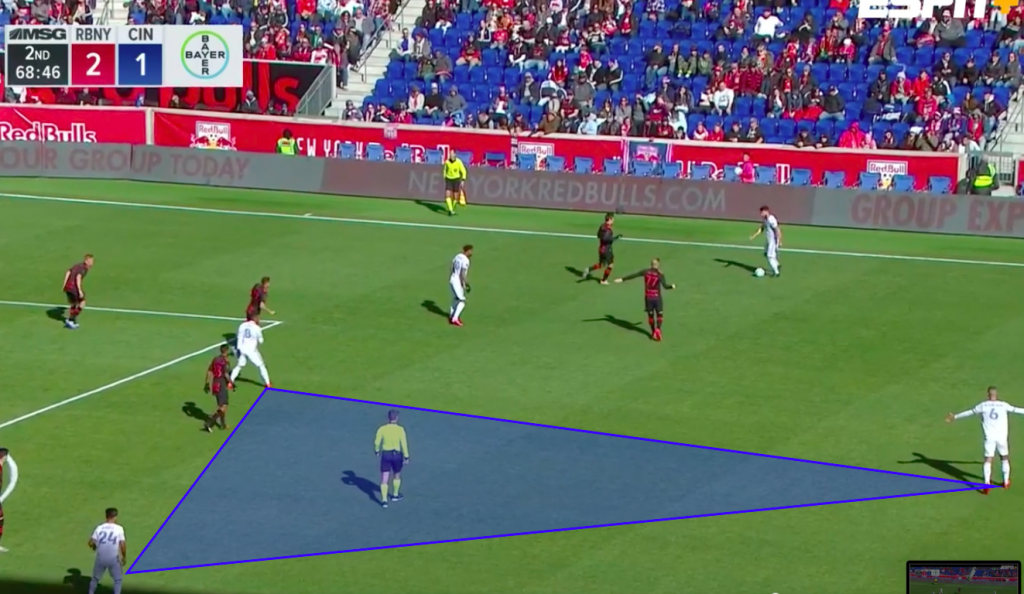 Because of Medunjanin’s lack of mobility, a single pass took him out of the play. Then Daniel Royer cut inside of Amaya, leaving him unable to help as well. This would have been a moment where a traditional holding midfielder would have committed a foul to disrupt the counter attack.

As the ball shifted to Duncan on the right flank, Royer continued his run forward (black highlight). With Deplagne pushed forward on the overlap, the No. 6, Medunjanin (blue highlight), bore the responsibility of tracking Royer’s run. Through a lack of legs, a lack of effort or a lack of understanding, Royer was left free to run to the back post.

Finally, as Royer cut inside with the ball, Maikel van der Werf and Kendall Waston overcommitted in quick succession to allow Royer to create an angle and slot home to make it 3-1 Red Bulls.

FC Cincinnati’s newest designated player, Jürgen Locadia, opened his account through a bit of good fortune and a lot of great anticipation. Amaya pressed hard in the midfield, and sensing a potential turnover, Locadia immediately began his run forward. 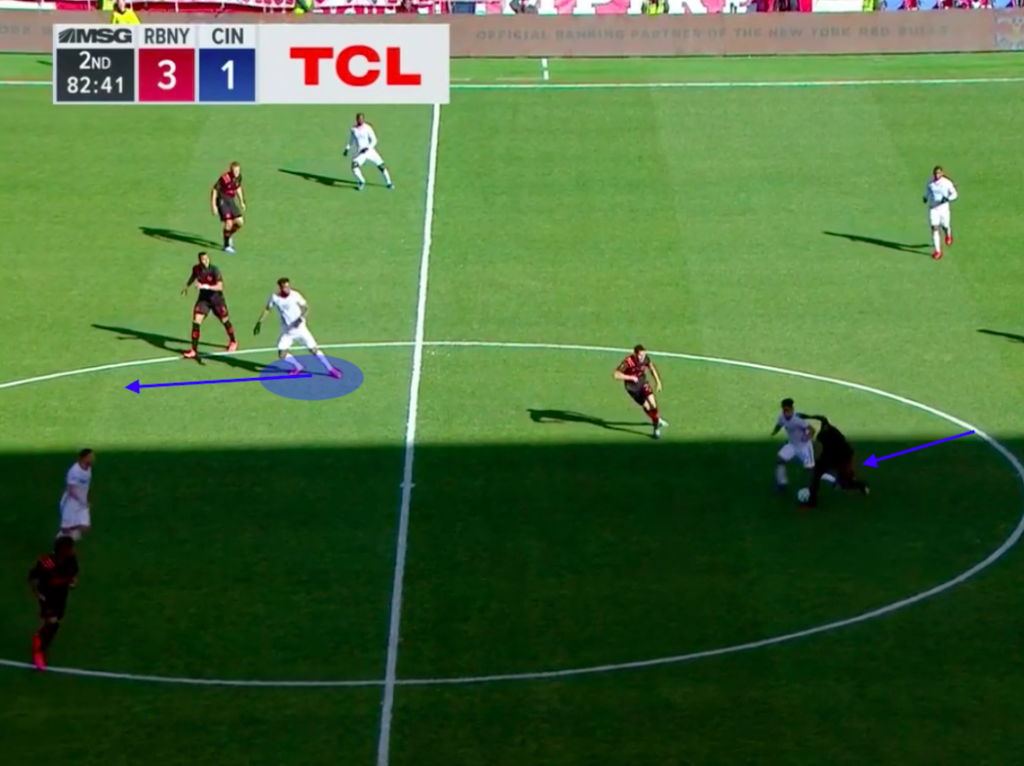 As Amaya poked the ball clear toward Adrien Regattin, Locadia did not hesitate in his run. This allowed him to be perfectly placed as a Red Bulls midfielder deflected the ball through the back line and into his path. 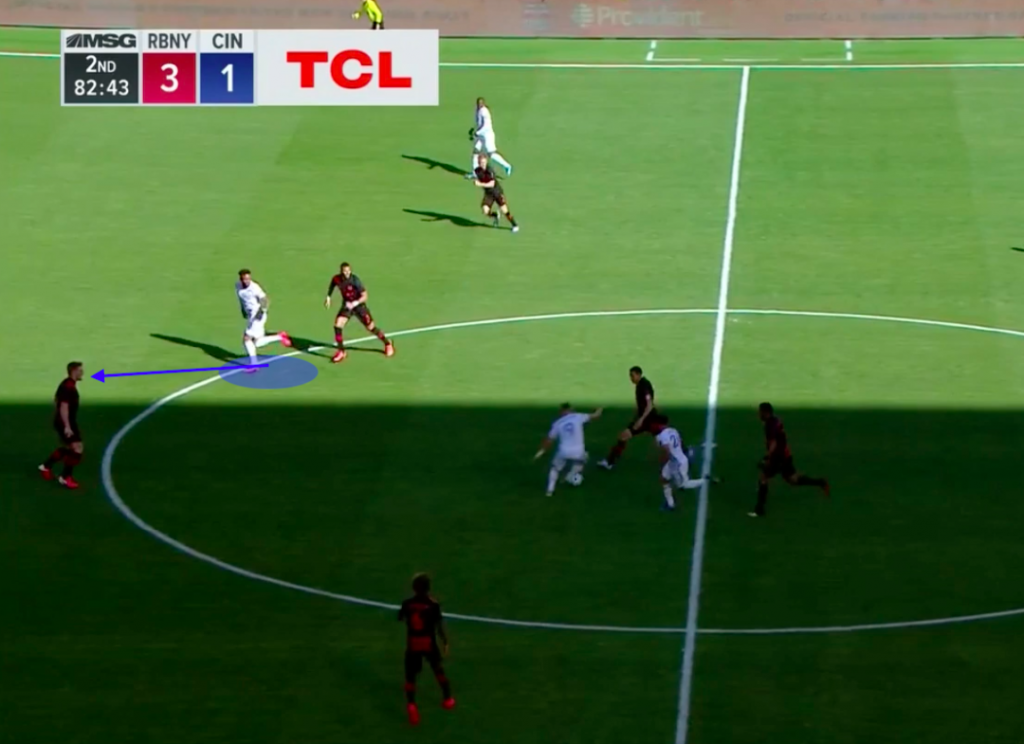 Finally, though Locadia’s finish left a bit to be desired, he hit the target and forced goalkeeper David Jensen into a save. Staying alert to the play, Locadia easily tucked the deflected shot home on the second effort to make it 3-2 Red Bulls.

Opening the season with a loss is never ideal. However, after falling behind 2-0 inside of 30 minutes, remaining strong enough to battle back to a narrow defeat is heartening. Also, winning the possession and passing percentage battles, it appears like FC Cincinnati are in for a much improved season over the doldrums of 2019.