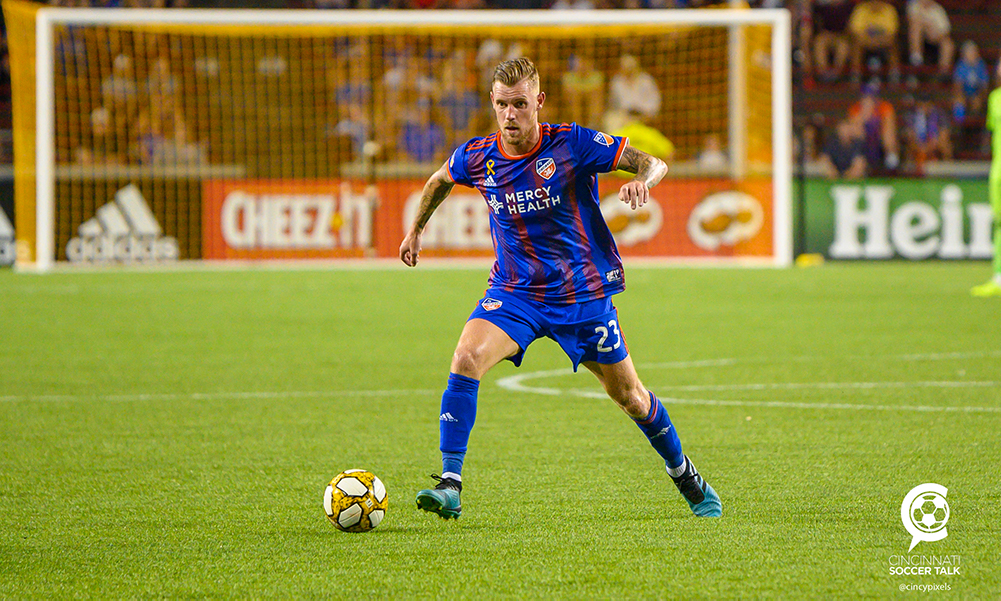 In a letter to the editor, Stephen Buckeridge has his FC Cincinnati roster holiday wish list ready.

Editor’s note: The following letter to the editor was submitted by Stephen Buckeridge and published with minimal editing.

Amidst the holiday gift deliveries and FC Cincinnati merchandise purchases, may I present an FCC 2020 Roster Holiday Wish List.

Before we unwrap those Orange and Blue packages under the tree, I first want to thank Nick Seuberling and the cast at Cincy Soccer Talk for allowing me to dust off the cobwebs and pen this offseason piece.

As summarized brilliantly in CST’s roster breakdown, there are 4 senior and 1 supplemental roster spots remaining to fill for the 2020 season. The roster currently stands at 27 players, but the club is expected to continue to loan out Hassan Ndam and Ben Lundt, saving two international roster spots in the process.

FC Cincinnati made an additional move Tuesday by acquiring Swedish center back Tom Pettersson on a free transfer following the expiration of his contract with Östersunds FK. Tom will occupy a senior roster position and one of the two remaining International roster spots.

With such few roster spots left, each move will be uber-critical to the success of the team in 2020. Where should FCC GM Gerard Nijkamp and Coach Ron Jans look to bolster their preferred 4-3-3 formation?

Without further ado, here is my Holiday Wish List for FCC’s 2020 Roster, prioritized for maximum benefit:

FC Cincinnati currently has four players rostered that act primarily as a No. 9 target striker. As highlighted by Brad and Ken, the current deal structures for Fanendo Adi and Darren Mattocks take up over 20% of the entire roster cap space … with limited return.

The first order of business is cutting ties from a failed relationship – trade or buy out Adi’s contract. This is a symbolic, roster-liberating and fan needed move. Any remaining money owed to Adi is a sunk cost, meaning water under the bridge. Time to move on!

In comparison, Mattocks currently has more appeal to MLS rosters than Adi and should also be moved if possible. If there are no willing trade partners, the club needs to re-structure his contract by buying it down with TAM. If the club moves on from Adi and/or Mattocks, this frees up a senior roster spot for a new center forward. Though, preserving the limited cap space for other positions may be more critical than refilling this position right away.

The recent cagey MLS Expansion Draft day trade with Nashville SC for Brandon Vazquez allows the club to pursue the above scenarios. With the addition of a playmaker (see below), a target forward combination of Vazquez, Mattocks and Dally is serviceable for now.

Arguably this could be #1A on this wish list but it really highlights the need to move on from Adi. That said, the biggest and most glaring FCC roster need is finding a bona fide attacking playmaker. There were many factors that led to earning the Wooden Spoon in 2019; however, the largest hole on the roster is the lack of a difference maker on the pitch that maintains meaningful possession, creates chances and delivers a magical touch when needed most.

The picture of the club’s senior leadership in Europe this past weekend makes you wonder if this position will be a forthcoming add. As enticing as this might appear, I hope we’re equally scouting the talent base throughout North and South America. The fact remains that we are limited on cap space and still likely conservatively approaching any player transfer fees. I echo Brad and Ken’s remarks that there is great value in South America at a fraction of the price for similar European talent.

What is justified here is utilizing a Designated Player slot and the current lone International spot.

The addition of Joe Gyau in August was indicative of how Nijkamp and Jans plan to repurpose the roster. Gyau, from my hometown of Silver Spring, Maryland, brings extensive experience at left wing and is adept at floating to the right or center as the game warrants. Having the support of Allan Cruz and either Greg Garza or Andrew Gutman behind him on the flank, provide FCC with our strongest opening day left side yet.

However, we still need a consistent approach and upgrade on the right side of the pitch. We witnessed a mix of Emmanuel Ledesma and Kekuta Manneh being used here in 2019. While Manu led the team in shots (49), assists (5) and was second in goals (6) last season, his salary expectations, age (31), and required International roster spot are troublesome for the 2020 roster. Manneh is a good mid-roster talent at a reasonable price but is more natural on the left than the right. He is best suited as depth off the bench on either the right or left versus a reliable starter.

As FCC should protect their final international spot for an attacking playmaker or additional target striker (possibly in Summer 2020), we need to look for a transfer of an American currently playing abroad or an opportunity for a trade within the MLS.

How does a name like 23-year-old Lynden Gooch sound to you Orange and Blue fans? He’s toiling in England’s third-tier League One with Sunderland AFC. He would likely be a $150-$200k cap charge + $750k TAM buy down type of player. Gooch’s hard-nosed, never say die style would endear him immediately in Cincinnati. Rumors were plentiful last December of a possible move to MLS. As a new dad and a desired return to USMNT consideration, this wish is not out of the realm of possibility.

Add talent and depth at center back

A glaring weakness in 2019 for FCC was their team defense and total goals allowed. The club gave up a record most goals against ever in an MLS season – 75! The current roster brings back three regulars in this position — Waston, van der Werff and Hagglund — that started 55 games combined last season. While the addition of the Dutch center back in July resulted in statistical improvement over the final 12 matches, and 3 clean sheets in the final five games, the back line still gave up 2.00 goals against average (GAA) during this time period.

Compounding the need to immediately improve the core spine of the defense are the following additional factors:

Author’s note: FC Cincinnati bolstered this position with the acquisition of Tom Pettersson

In preparation of the secondary transfer window in July 2020, the club should keep at least one senior roster spot available. Positional needs and opportunities in the summer and looking forward to the 2021 season should include a possible DP target striker, full back (Eric Lichaj) and goalkeeper (Ethan Horvath).

Let us know who is on your FCC Wish List. Wishing everyone a Happy Hannukah, Merry Christmas and joyous New Year.