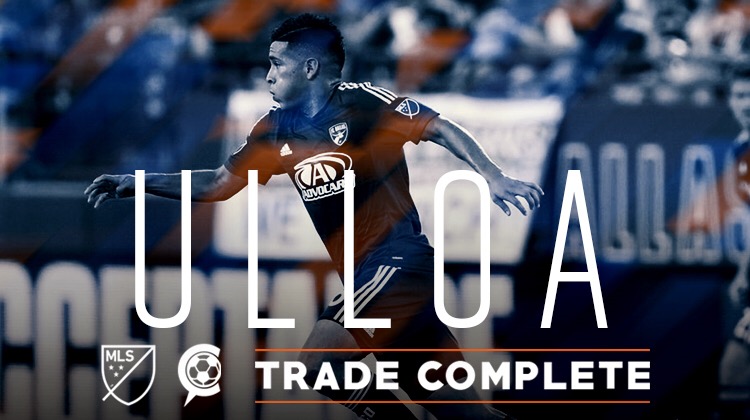 FC Cincinnati made its first move of the off-season sending Victor Ulloa to expansion side Inter Miami CF for $50,000 in General Allocated Money (GAM).

Not even an hour into the two-day MLS Winter trade window, FC Cincinnati made its first move of the off-season sending Victor Ulloa to expansion side Inter Miami CF. FC Cincinnati acquired $50,000 in General Allocation Money, a 2020 MLS SuperDraft third-round selection and the 26th pick of the 2019 MLS Re-Entry Draft (Stage 1) from Inter Miami CF in exchange for the rights to midfielder Victor Ulloa and the first pick of the 2019 MLS Re-Entry Draft (Stage 1).

The Re-Entry Process (Stage 1 and Stage 2) is conducted in reverse order of 2019 season finish, taking into account postseason performance. The list of players eligible for selection in the Re-Entry Process will be released by MLS Communications on November 22.

During his one season with the Orange and Blue, Ulloa made 26 appearances, including 22 starts, scored one goal and added two assists. Additionally, he was named to the MLS team of the Week bench in week 3 and MLS team of the Week Starting XI in week 11 for his performances on the pitch. Ulloa was originally acquired via trade from FC Dallas in December 2018 for $150,000 in General Allocation Money.

“We are grateful for what Victor brought to this club both on and off the pitch, we wish him all the best with his new opportunity in Miami,” FC Cincinnati General Manager Gerard Nijkamp said. “This move gives us an opportunity to have both better balance and more flexibility in our roster construction ahead of the 2020 MLS season.”

If you are wondering about the value of this deal there are a few things to keep in mind.

– Ulloa is out of contract. FC Cincinnati had sole MLS rights to negotiate with him until a certain date. They have traded those rights to Miami. Miami still needs to reach a deal with Victor as FCC would have needed to do.

– FC Cincinnati traded 150k GAM for Ulloa in 2019 but that money is reset/is a sunk cost. Receiving 50k isn’t great but it is something and FCC didn’t have much to offer here.

– The 3rd round Super Draft pick isn’t worth much. Most teams are passing in 3rd round. FCC doesn’t have a 2nd team to develop draft picks and they already have a few to manage.

– FCC traded their #1 re-entry draft pick away. Miami could possibly benefit from this but only four players were taken in last year’s re-entry draft. FCC is betting they would not use this anyway.

Boston Brazzell contributed to this report.