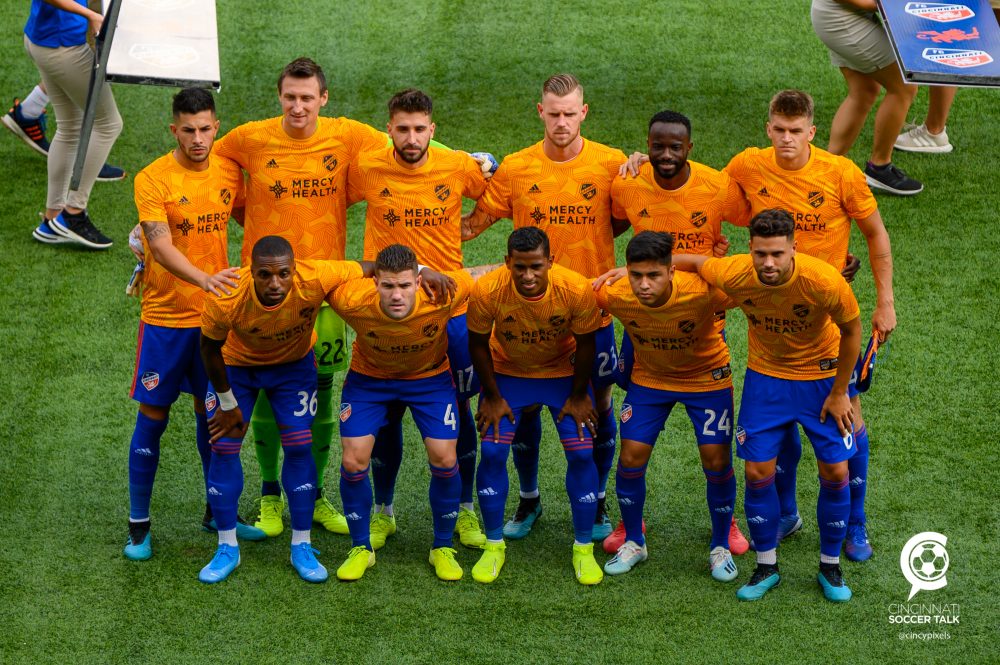 Here are our player ratings for FC Cincinnati’s 1-1 draw Sunday with Orlando City SC in the home finale.

FC Cincinnati jumped out to a lead in the 40th minute behind a team-high seventh goal for Allan Cruz on Sunday. Unfortunately, Orlando got a late equalizer in the 91st minute by Benji Michel, leaving a final result of 1-1. Now on to the Player Ratings!

Tough for Tyton to lose the shut out in stoppage time after another solid performance by the keeper. I think a month and a half ago most FC Cincinnati fans would have moved on from Tyton, but he’s shown why the club picked him up with a couple of crucial point-blank saves to keep the team in the match. Dom Dwyer beat Maikel van der Werff in the 50th minute on a header, and Tyton clipped it just over the bar. The keeper couldn’t do much to stop Michel’s equalizer. Mathieu Deplagne wasn’t able to fully clear the ball, and it landed at the feet of the rookie forward who calmly put it in the back of the net. Bad beat for Tyton, but love how he’s closing the season.

If you want a reason to believe things will improve in 2020, look at the relationship Garza and Joseph-Claude Gyau started to form Sunday night. The left side of the field was electric for FC Cincinnati. Garza was 54 of 63 in passing (86%) and created four chances. Twenty-eight of those passes were to Gyau. You are going to hear this a lot, but if you give these two a real striker and playmaker to work with, defenses won’t be able to key in on certain players, opening more chances for the Cincinnati attack.

With Kendall Waston’s yellow card suspension, Hagglund was given the start and captain’s armband. He rewarded coach Ron Jans’ trust with a 657 Audi index score, driven by 13 clearances. Hagglund was tremendous in the air, making things difficult for Dwyer. I’d be shocked if this performance doesn’t earn him a spot in the Best XI for this week in MLS.

Van der Werff added eight clearances of his own to the Cincinnati effort. Van der Werff has proven to be a significant reason to the club’s turnaround. That being said, he was caught flatfooted on the play that led to Tyton’s save of Dwyer. That mistake could have proven costly, and that is why he earned a 6 in my book.

Deplagne’s Audi score took a big hit on his failed clearance leading to Michel’s goal. On the night though, he was solid. Most of the attack for FC Cincinnati went up the left, but he did manage the ball effectively and even got off two shots. As Garza was caught up the field, he was tasked to slide over and help out the defensive effort. This was all to strategy, and I wouldn’t have expected much else from Deplagne.

With Cruz and Frankie Amaya getting forward, Bertone was tasked with sliding back in front of the two center-backs. Like Deplagne, there wasn’t anything flashy, but he did enough to frustrate the Orlando attack. He also did a nice job shuffling the ball upfield and limiting turnovers that have plagued FC Cincinnati a couple of weeks ago.

While Cruz will get the headlines for his goal, Amaya put in a lot of dirty work in midfield to pick up the point. The first overall SuperDraft pick’s work rate was top notch Sunday. I liked how he tracked back to frustrate Nani but then got forward and tried to work with Garza and Cruz. If FC Cincinnati picks up a No. 10 next season, I’m not sure where Amaya will fit, but regardless, it will give Jans & Co. options.

Alright, is it too late to switch my CST MVP vote to Cruz? This guy time and time again has ended up at the right spot for FC Cincinnati this season. While he didn’t quite strike his goal as cleanly as he would want, the ball was going the opposite way of Brian Rowe. Without a true striker, Cruz played an advanced role and put all four of his shots on target. Shame he picked up a disputable yellow that will end his season a match early.

To me, Lamah is looking like a rejuvenated player under Jans. I like how Lamah puts in more work on the defensive side of the field and limited the pressure put on the backline when he went forward. He had two chances that nearly put FC Cincinnati ahead. Lamah cracked a shot in the box in the 36th minute that Orlando keeper Rowe tipped off the bar. The winger was then brought down in the box right before the half by Rowe. The crucial call not to award a penalty kick drew loud boos by the home crowd. For my money, Rowe never made a play on the ball, so that’s a PK all day long.

The guy was everywhere. He led the match in take-ons (5/8), was second in attacking third passes (21/22), and created two chances. Gyau was dynamic, especially in the first half up the left flank with Garza. He made moves with the ball unfamiliar to players previously in Orange & Blue. His flick on to Emmanuel Ledesma to set up the Cruz goal was beautiful. He weighted the pass perfectly, allowing Ledesma to run to the ball and hit the assist to Cruz. Really looking forward to seeing what he can do with more strike partners.

With injuries to Fanendo Adi, Darren Mattocks and Kekuta Manneh, Jans opted for a rare start at striker for Ledesma. Unlike a typical striker, Ledesma tended to drop deeper to get on the ball. While not ideal, Ledesma tried to make the most of his chances in a physical matchup against a tall pair of Orlando centerbacks. Out of four shots, three tested the keeper, but all were just outside the post. His key moment of the match was the assist to Cruz. Ledesma took a nice ball from Gyau to the endline before hitting Cruz on a late run at the top of the box. This was more of a move you’d expect from Ledesma and his awareness to get the ball to Cruz was key.

Etienne subbed in for Lamah but wasn’t able to spur on the Cincinnati attack to clinch a winning goal. That had some to do with Etienne but more to do with the fact that Gyau, Amaya, Ledesma and Cruz were running on fumes. Too often Etienne didn’t have a partner with him but, he still managed a shot on goal. Hopeful with more help the young man will be a long term contributor for FC Cincinnati.

With Amaya cramping, Alashe was substituted in during the 74th minute. He was tasked with clogging up the midfield while also pitching into the attack. He was 13 of 13 in passes for a short time on the field. Like Etienne, when he got forward, there was not much gas left in the tank to help.

McCabe came in for Cruz to close out the match.