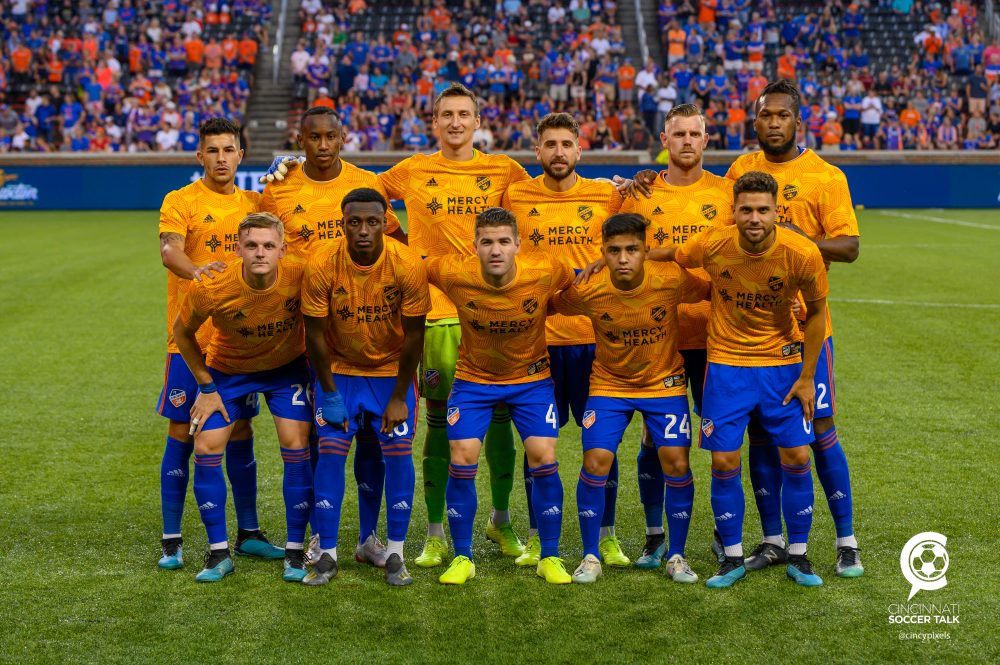 As if this season wasn’t hard enough, Ron Jans took a roster depleted from injuries and earned a point at home for FC Cincinnati. Here are our player ratings for the match.

As if this season wasn’t hard enough, FC Cincinnati coach Ron Jans took a roster depleted from injuries and earned a point at home for FC Cincinnati. The result, 0-0, was the club’s fourth clean sheet of the season. Now on to the Player Ratings!

Tyton picked up the fourth clean sheet for FC Cincinnati this season. He wasn’t asked to do much, as the Fire failed to put shot after shot on goal. He looked beat more than once, but it’s hard to pick put too many mistakes when you squad keeps a goose egg on your opponent’s side of the score sheet.

While I probably could have given Garza a 7 for the clean sheet, the left-back did look a little loose at times. His stats looked good with six clearances and 36 completed passes (87%), I felt he could’ve been beaten a couple of times by the Fire attack. Luckily their ability to finish on the night probably cost them a playoff spot.

Ron Jans highlighted Waston in his post-match comments: “So, I’m satisfied with the team spirit and everybody fighting. If you see (Maikel) van der Werff and (Kendall) Waston running back after a corner kick, it’s not running back, it’s sprinting back. I think that says all. I admire my players, so it’s a big compliment for them.” Waston had nine clearances, and you can clearly see the partnership forming with van der Werff in the middle of the backline.

You can see van der Werff start to assert his leadership on the field. He had a massive clearance off the goal line in 63rd minute. That was just one of his 10 on the night. He followed that up by almost landing the winner in the 80th, but his header hit the crossbar. His hustle and drive are starting to rub off on his teammates, and I love how he appears out of nowhere late in the box with dangerous chances.

Team effort on the shutout highlighted by his great play to cut off Nikolic just before the half whistle. If he didn’t make the play to cut off the pass, Nikolic taps that in for a goal.

Bertone did a nice job in midfield alongside another midfield partner in Tommy McCabe. It can not be overstated how difficult it must be to have your midfield partnerships change week after week. Add to that it was Bertone’s third start in eight days in oppressive heat for the Swiss native. I liked thaf with McCabe back, Bertone felt comfortable to press into the attack in the second half. He came in as a late runner into the box a couple of times and looked a threat.

“When somebody is dead, someone must have his bread,” said Jans postmatch of McCabe as he was inserted into the starting XI for an ill Caleb Stanko. Making just his second MLS start, McCabe was calm, cool and collected against a talented Fire midfield. He made few mistakes and was solid on the ball all night. He also contributed mightily on the defensive side of the ball, picking up threw successful tackles and six clearances. Mark me as someone intrigued to see what McCabe can do over the last two matches this season.

Amaya was hamstrung in the center of the pitch without a reliable striker partner. Without a true No. 9, FC Cincinnati’s attack had to move down the wings more than the center. He completed 11 of his 14 pass attempts in the final third, but only two were probing passes into the box.

Like Amaya, Etienne was hampered by a lack of a goal scorer. He was efficient with the ball, but the FC Cincinnati attack didn’t catch its stride until he was substituted for Roland Lamah.

Perhaps the only player on the pitch for FC Cincinnati who can find his own shot outside of Lamah, Ledesma account for three of the club’s 10 shots. While his passing percentage (54%) is below average, this stems from FC Cincinnati’s inability to create chances. Ledesma has been one of the few players going for it offensively. At times his teammates might want to pull their hair out because of a wild shot or pass, but I think Jans has to appreciate seeing his player bring a top-notch effort every time he steps on the pitch.

The rookie had a tough match and was pulled at halftime. He was unable to get involved much and completed just two of six passes.

Gyau subbed in for Dally at the half. Jans said the move was made to help create more depth in the formation. While his substitution didn’t lead to any goals, the offense looked more potent with him on the field. I liked how he wasn’t afraid to get further up the field to create chances. His speed is unmistakable and with a better supporting cast, he can play in his preferred wide position. Look out for Gyau to be a mainstay in 2020.

Roland Lamah once again is a point of frustration for me. He makes great plays thinking he should be a week in and week out starter followed up by some plays that make you hold your hands up in the air. No doubt he can be a dangerous player, and I thought he had a goal in the 79th forcing a tough save from Kronholm. Then in the 86th minute, he pulls a point-blank shot wide. He was bodied, but Lamah needs to get it on goal. At his budget charge, he needs to put more balls in the net.

Gutman came in for Bertone to close out the match.