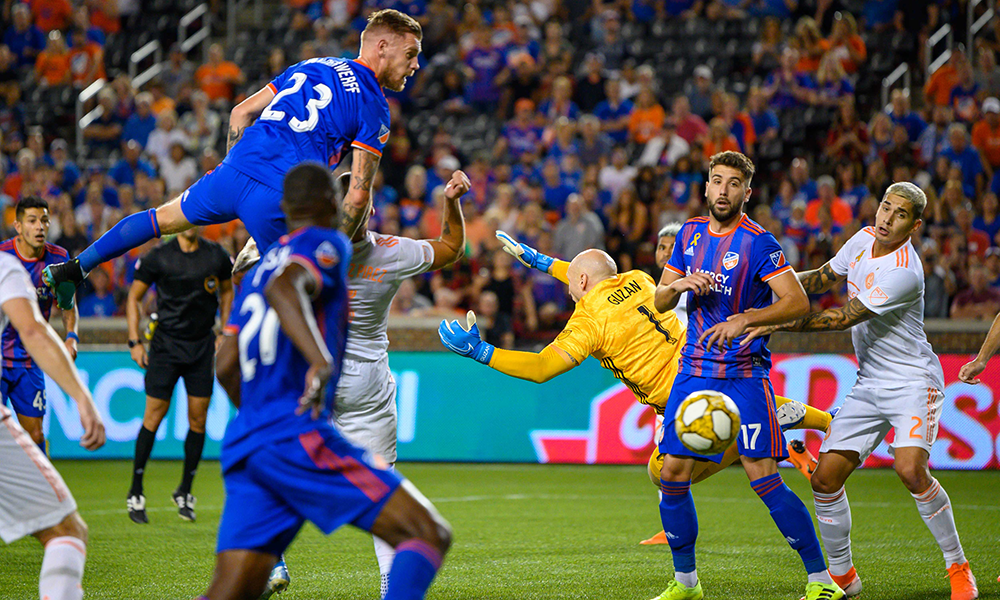 Josef Martinez notched a brace for Atlanta United in a 2-0 victory Wednesday over FC Cincinnati at Nippert Stadium. The Orange and Blue matched the single-season record for goals allowed.

FC Cincinnati fans have been lucky to see Zlatan Ibrahimovic and Wayne Rooney take the pitch at Nippert Stadium this season. On Wednesday, they were treated to the Josef Martinez show.

The reigning MLS MVP collected two goals just six minutes apart for Atlanta United FC to extend his scoring streak to 15 matches. That was all the defending champions needed to separate themselves from FC Cincinnati in a 2-0 victory at Nippert.

The game was essentially a stalemate until Martinez and Gonzalo Martinez teamed up on a nifty give-and-go counterattack in the 59th minute. Then in the 65th, Josef Martinez shifted past Maikel van der Werff and Nick Hagglund for a first-class finish with his left foot. He’s now tied with Ibrahimovic with 26 goals in the Golden Boot race. Carlos Vela leads with 28.

FC Cincinnati started the match bunkering down on defense. At one point in the first half, Atlanta United had 85% of possession and outpassed FC Cincinnati 336-94 before halftime. The home side totaled 23 clearances.

The Orange and Blue had a spell of attack midway through the half. In the 30th minute, Atlanta United keeper Brad Guzan made a critical save on a van der Werff header.

FC Cincinnati started the second half aggressively. Andrew Gutman slalomed around Atlanta United defender Franco Escobar in the 58th minute, but his shot was blocked out of bounds. The ensuing corner kick led to the Josef Martinez counterattack.

Even trailing 2-0, FC Cincinnati had several opportunities to pull one back but could not cash in. The best second-half chance was when Rashawn Dally receiving a Gutman cross inside the 6-yard box in the 84th minute, but Dally punched it over goal.

The Orange and Blue logged 14 shots but had just two on target. Atlanta United had 15 shots, nine on target, and forced FC Cincinnati goalkeeper Przemyslaw Tyton into four saves.