In this week’s edition of Talking Tactics, Brad Gough says there is some good in the system new coach Ron Jans is installing at FC Cincinnati, most notably in attack and the transition to attack.

Despite another disappointing loss on Saturday, I believe that there were some really good moments happening for FC Cincinnati as it took on FC Dallas. Coach Ron Jans didn’t change much from the Hell is Real Derby loss, but he did elect to employ Kekuta Manneh at center striker. This change, along with a bit more comfort among the players with what Jans is asking them to do, allowed me to find a few positive nuggets to ponder as we head into Saturday’s match vs. Toronto FC.

While the Orange and Blue’s transition to defense leaves a lot to be desired, the team showed some improvement in its transition to the attack phase of play on Saturday. Jans has the team set up to build from the back, using the two center backs and two more defensive-minded midfielders while pushing the outside backs high in possession. This mode of operating also provides unique opportunities for a quick counter-attack using the outside backs in certain moments, and we started to see this create some opportunities on Saturday.

In the 12th minute against FC Dallas, Maikel van der Werff stuck out a foot to deflect a cross, and the ball ended up popping out to Roland Lamah on the right wing. Immediately, Leonardo Bertone and Victor Ulloa moved to support, and both outside backs began to press high, transitioning to their build-from-the-back positions. 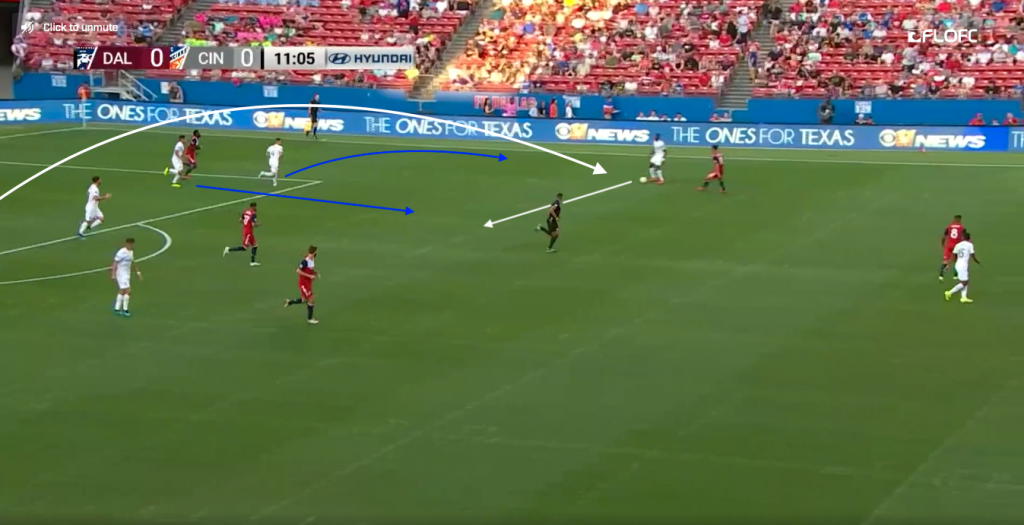 Lamah played the ball inside to Ulloa, who continued the switching of fields by finding a pinched in Emmanuel Ledesma. Ledesma took a single touch to find van der Werff in a deep, central position. At this point, FCC had successfully transitioned to the “in possession” phase of play. 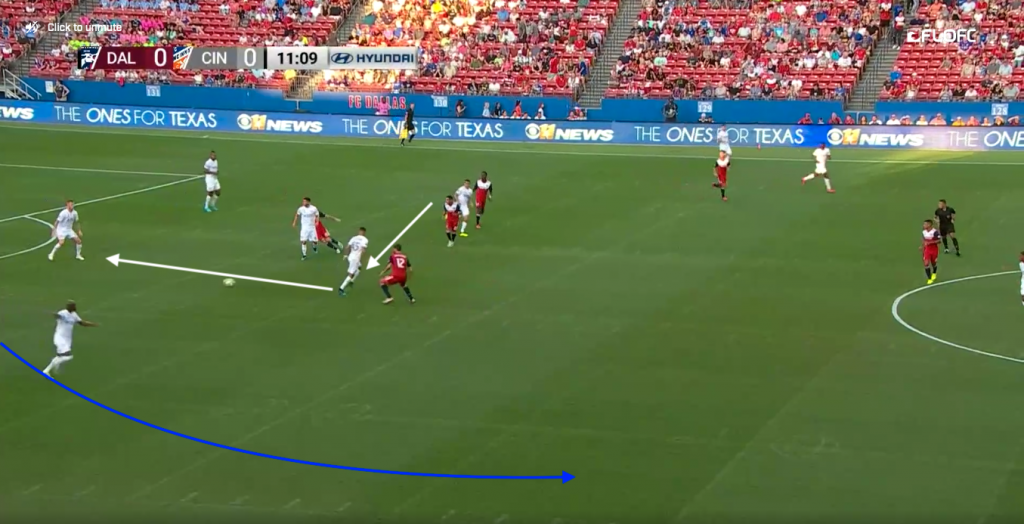 Rather than slowing the play down and continuing to build, van der Werff spotted Allan Cruz up the field and played a long ball into the midfielder. Justin Hoyte continued his high and wide transition and ended up in a good position to allow Cruz to cut inside. When all was said and done, FCC had quickly created a 3v3 transition opportunity. 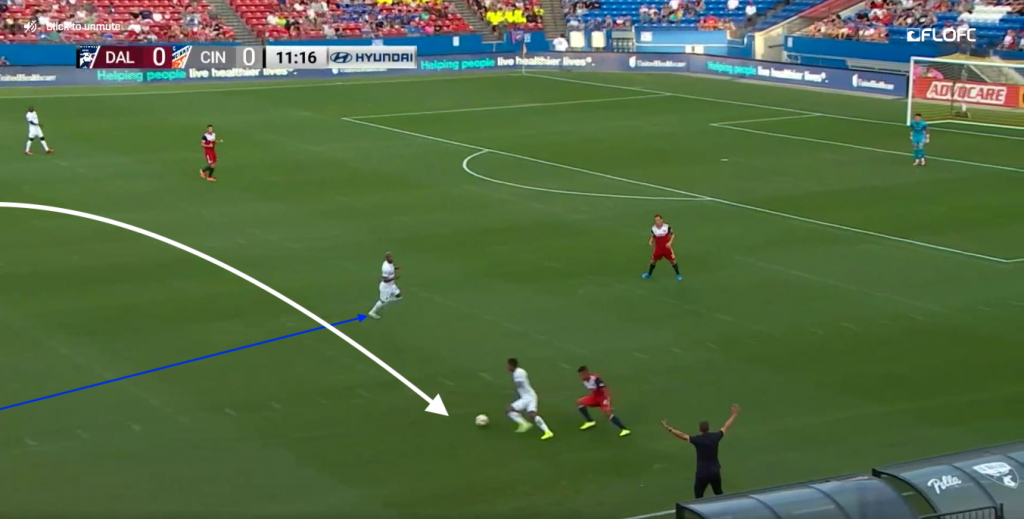 Because Cruz then misplayed his pass and turned the ball over, this chance doesn’t stand out as an excellent transition. However, it was executed with speed and precision up until that point, and had Cruz maintained possession, FCC could have had a 5v3 opportunity. 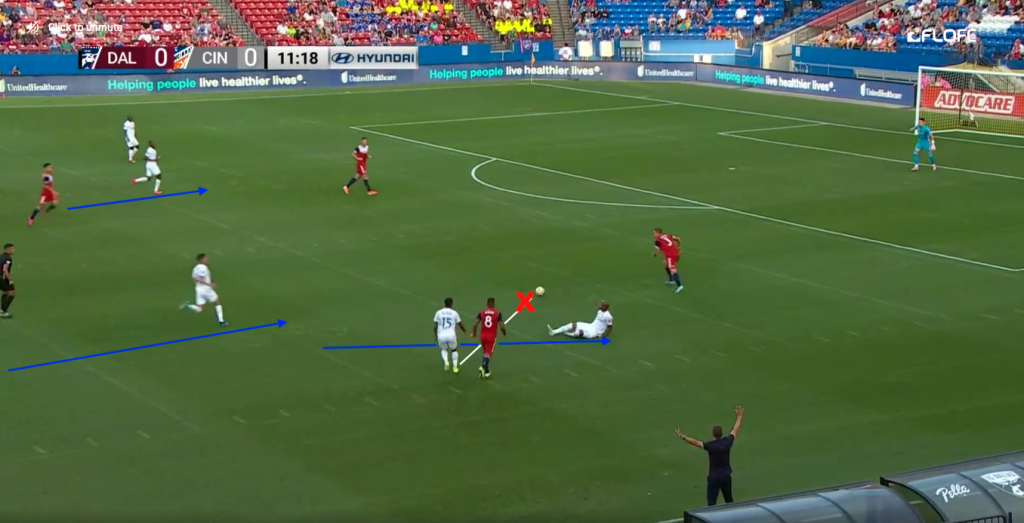 Work is needed in order to come up with the all-too-elusive end product, but these quick transitions happened on several occasions on Saturday, and I’m hopeful going forward that FC Cincinnati can turn them into shots, and maybe even goals.

Target play between the lines

Because of the way that Jans is emphasizing the movement of the outside backs, the FCC wingers have ample opportunities to move infield to receive the ball. This creates another passing option from deep positions. Below, Lamah moved infield to act as a target for Kendall Waston, and the big center back drove a pass directly into his feet. 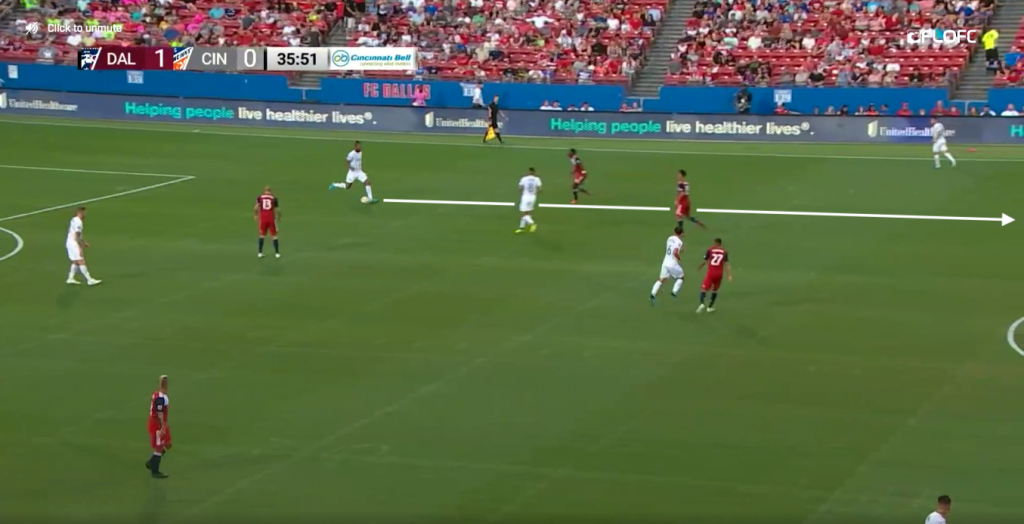 With Greg Garza pushing forward, FC Dallas outside back Reggie Cannon had been drawn into a wide position. Lamah found the space between Cannon and holding midfielder Bryan Acosta and was able to receive Waston’s pass on the half-turn and move the ball forward. 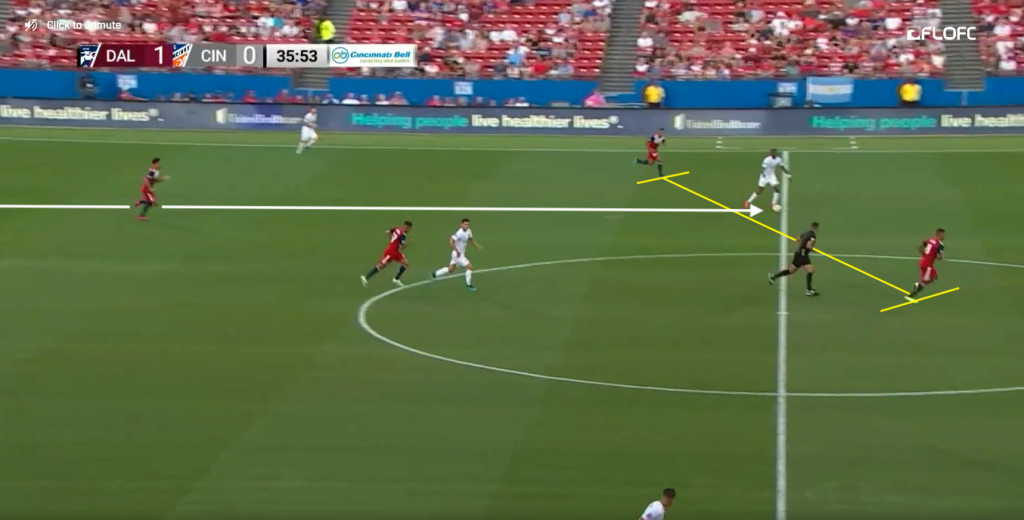 This time Manneh elected to loop his run to the outside, and Lamah attempted to pick him out. Manneh’s speed saved an otherwise lackluster pass into the corner and forced defender Matt Hedges into a lunging challenge, drawing the foul and creating a set-piece opportunity for the Orange and Blue. 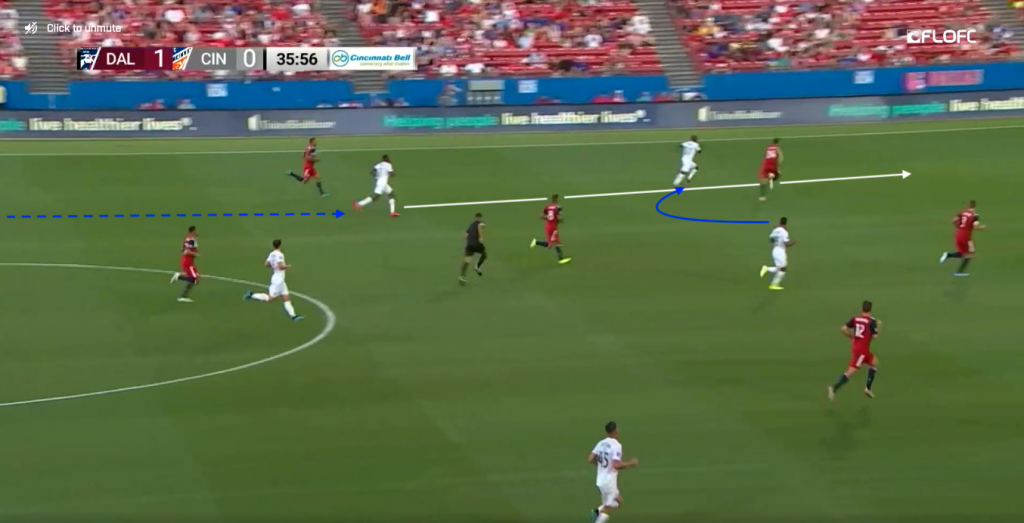 Manneh — the good, the bad and the ugly

The first half of Saturday’s match saw Manneh receive 16 passes and create some havoc along the FC Dallas backline. I was very impressed with his ability to drop in between the lines and pick up passes to launch FCC attacks.

This is a great option of the threat that Manneh can pose when he is put in the right situations. In the 23rd minute Manneh dropped in between the FC Dallas back and middle lines to receive a long pass from Waston. 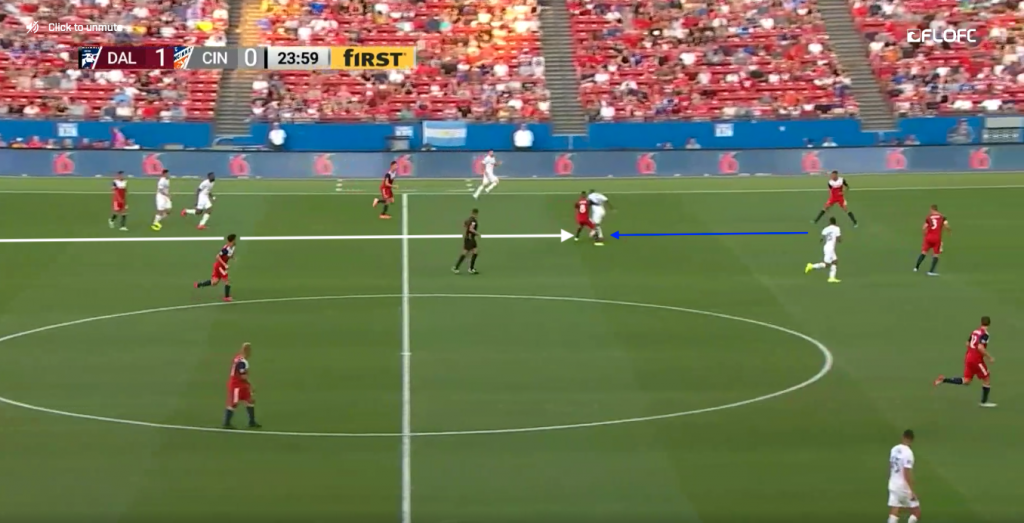 Manneh turned Acosta, shrugged off his challenge and burst with speed past both Acosta and Brandon Servania. Unfortunately, this was the moment that he needed one of his teammates to exploit his sudden turn of pace and move to create space. 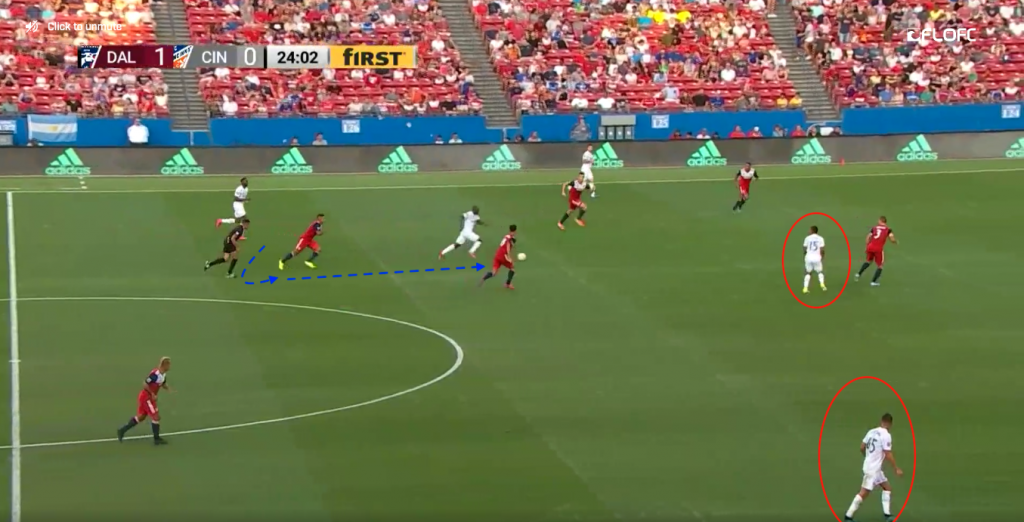 Without such movement, Manneh continued on leaving two more Dallas defenders in his wake and drawing center back Reto Ziegler out of position. Once again, Cruz and Ledesma chose to run in straight lines alongside Manneh, doing the Gambian no favors. 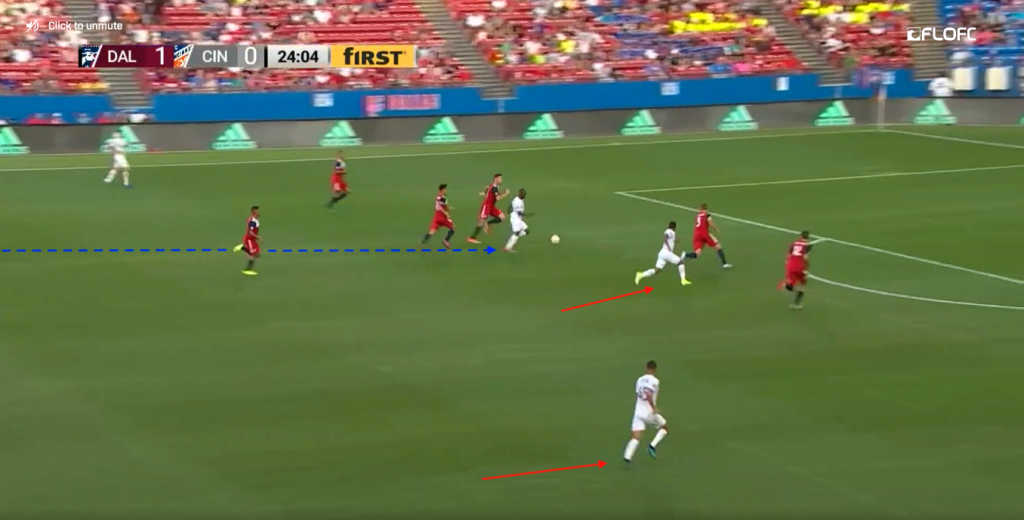 Without his teammates doing anything to create options for him, Manneh cut inside of Ziegler and was unlucky to have the ball poked away by a recovering Matt Hedges. Had he been able to get off a shot, or had Cruz or Ledesma been able to free themselves up with some creative movement, this run by Manneh could have gone down as one of the highlights of the season. 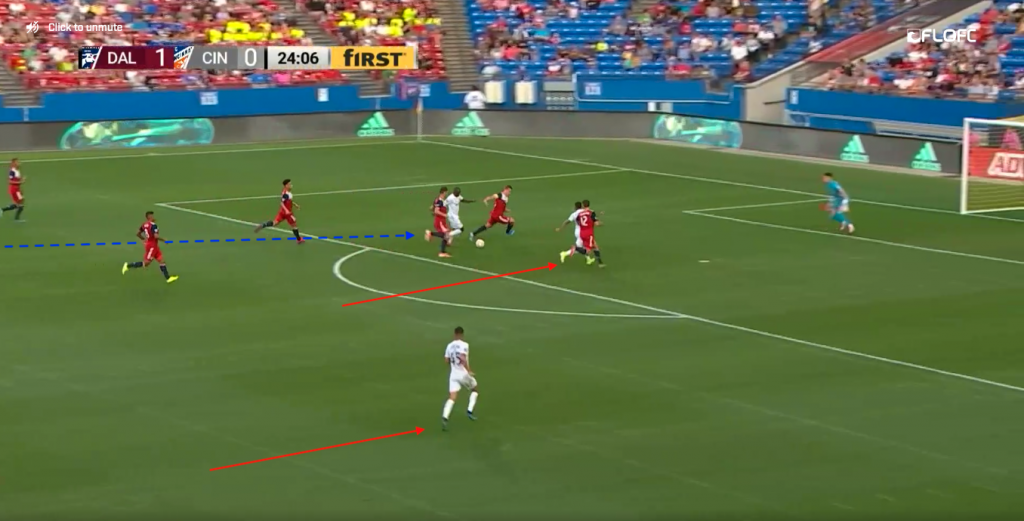 Of course, that was the good that Manneh brought on Saturday. There was also the bad… namely his lack of an end product as seen at the finish of this run and on other occasions where he failed to pick out the right pass. Then the ugly happened when he took a needless red card ending any hopes of an FCC comeback.

For all of the negativity surrounding the club, I believe FCC is moving in the right direction. The signs of Jans’s fingerprints are beginning to emerge on the team in its attacking and transition to attack phases. A lot of work is still needed on the defending and transition to defense phases. I choose to believe that Jans has what it takes to right the ship by the beginning of 2020 — for now.