We now know what an FC Cincinnati team coached by Ron Jans will look like, with the team bombing forward on the left wing and using a high press.

FC Cincinnati coach Ron Jans got his tenure off to a non-losing start. Perhaps not the result he wanted, especially after going up 2-0 in the first half. The up-tempo pressing style, slight tweak to the formation and attacking philosophy that will be the hallmarks of this team under Jans was evident, but not perfect.

Early on it was noticeable that FC Cincinnati, under Jans, is going to push its outside backs forward. Under Alan Koch and Yoann Damet, the FCC outside backs would get forward at times but played conservatively. When one back got forward, the other would often tuck in and stay defensive minded, always wary of counterattacks. A quick look at Andrew Gutman’s and Mathieu Deplagne’s heat maps shows that this was not the case on Saturday. 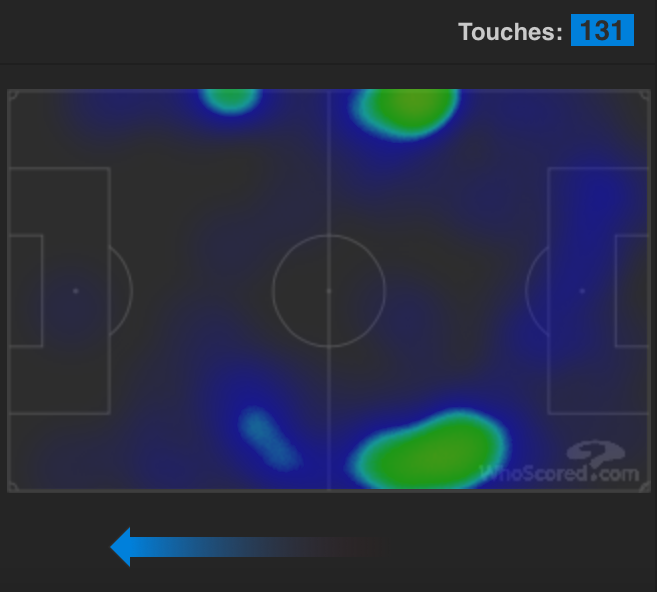 Though the outside backs were defenders first, they got a fair bit of action in the attacking half. FCC still looked to build methodically out of the back, but instead of pulling its outside backs wide and deep as part of the build, Caleb Stanko often dropped in between Maikel van der Werff and Kendall Waston to form a back three, allowing Gutman and Deplagne to push forward. 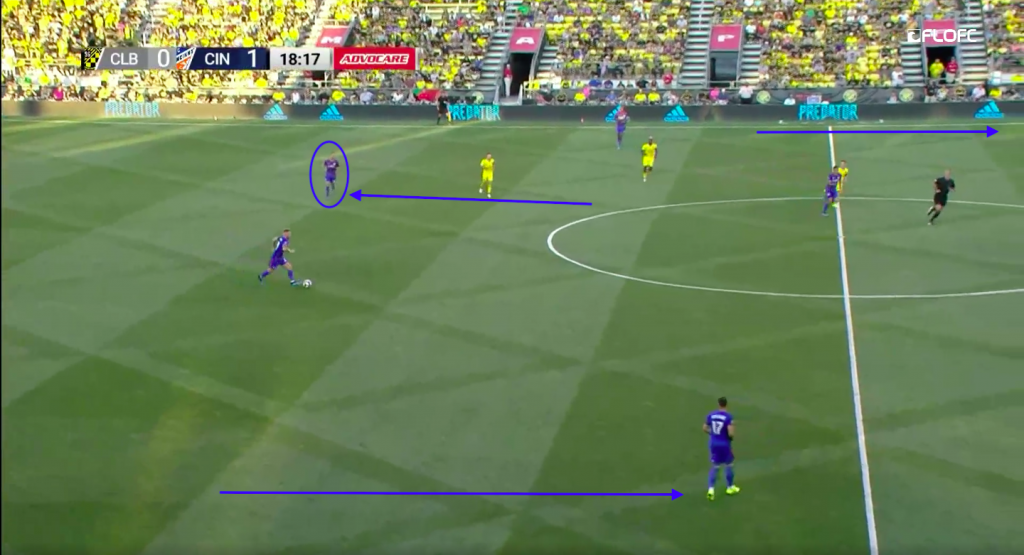 The Orange and Blue often built through the outside instead of relying on the three center midfielders to dictate play as they had in the past. Then, as the team gained possession in the wide parts of the field, the midfield three had free reign to shift over to help with possession in the tight spaces created, and the opposite winger pinched toward the middle, allowing him to become a link between one side of the field and the overlapping outside back on the other. 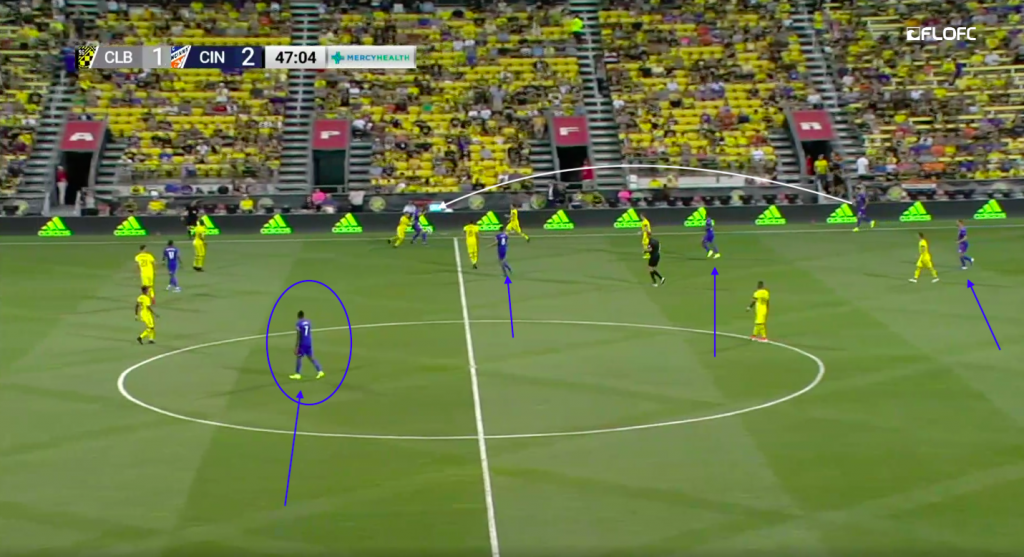 When the opportunity presented itself, the midfield would look to get the centrally pinched winger (Roland Lamah in the example below) on the ball in the space just behind the Columbus midfield. 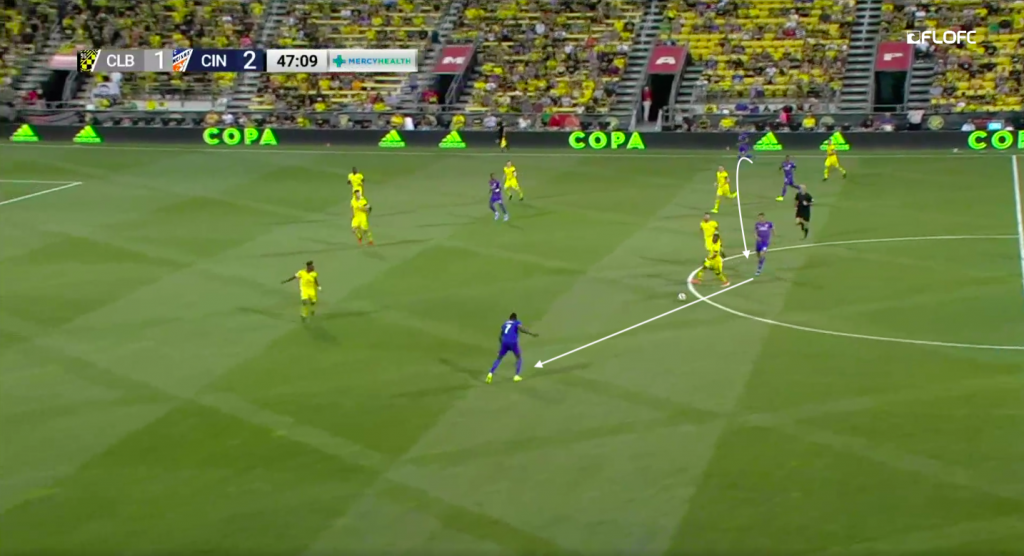 This allowed the outside back to get forward with speed and create a quick attacking overload on the weak side of the field. 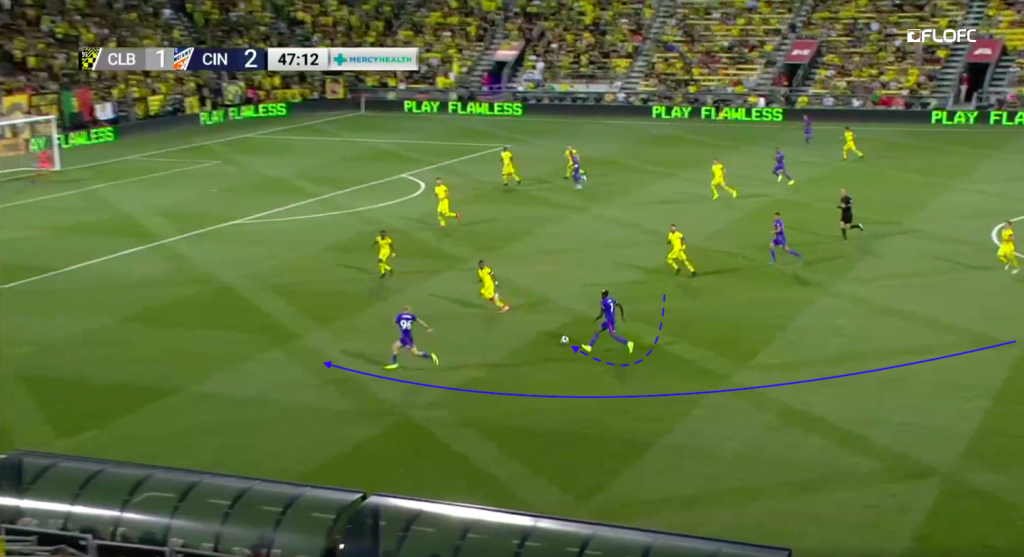 This was particularly effective on the left, as Gutman consistently bombed forward to the tune of 40% of the FCC attack coming from his side. Gutman chipped in to the attack with four crosses, two successful dribbles and a shot.

FC Cincinnati attempted to employ a frenetic high press system in Jans’ first game in charge. The nuance in the FCC high press included the midfield all pressing to the ball side and the weak side winger shifting centrally. 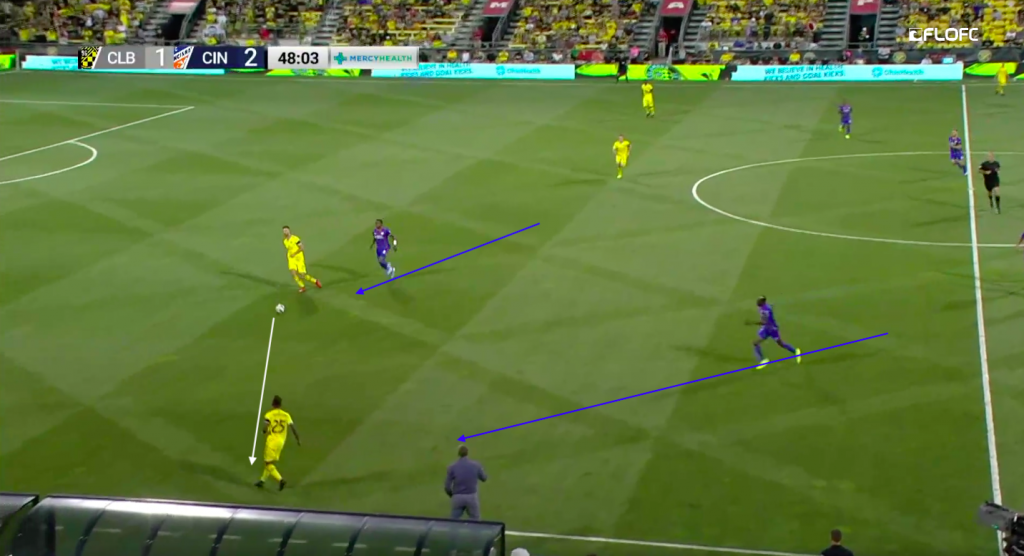 As the strong side winger and forward pressed to the outside, the midfield, center backs, weak side winger and strong side outside back compacted space to limit any passing options. As the Crew attempted to play any pass forward, there was a member of the Orange and Blue ready to step in and win the ball. 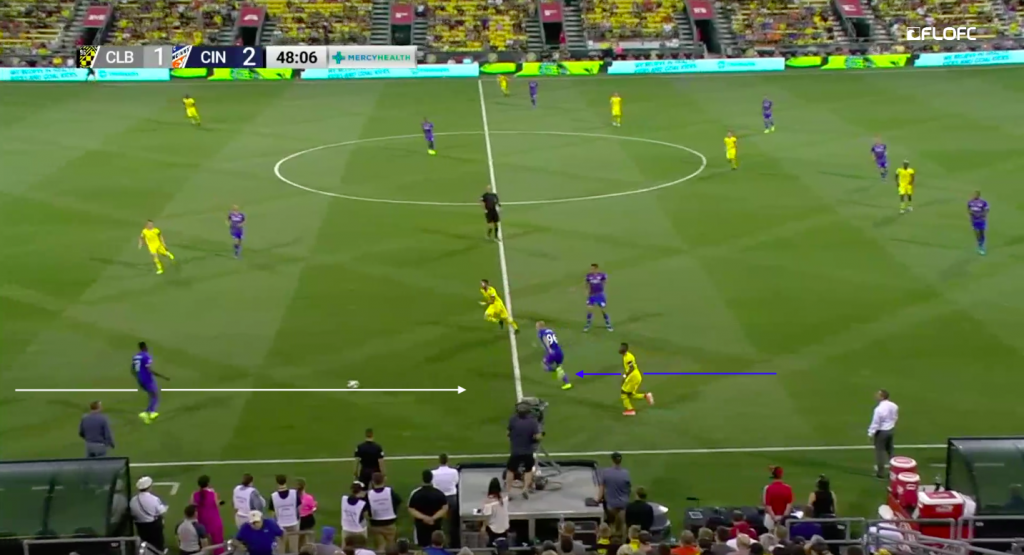 With the team already compacted to one side, FCC could then attempt to execute a few quick, short passes to switch the ball to the opposite winger. Or, as in this example, work a quick combination down the touch line to create an opportunity. 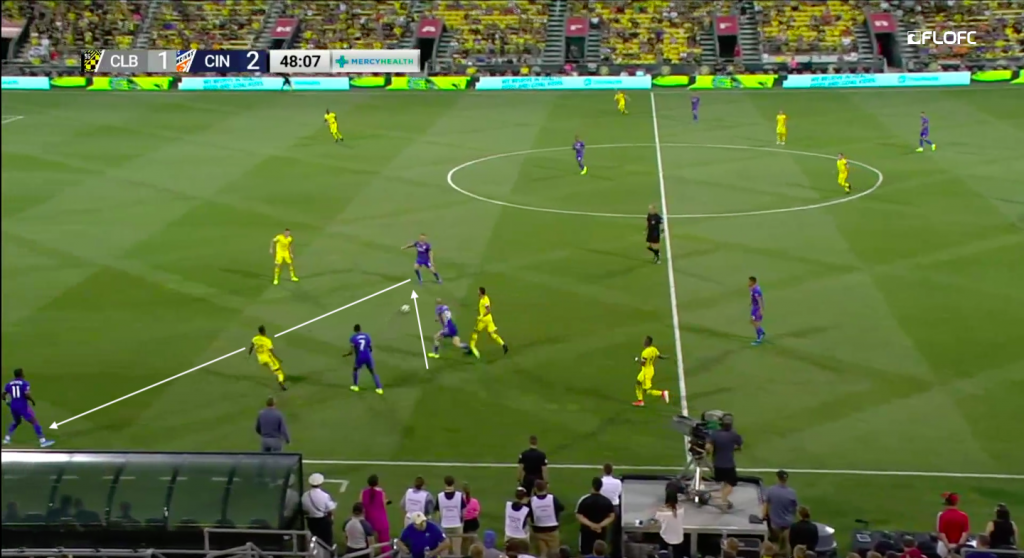 When done correctly, winning the ball in this fashion can often lead to a shot within a few passes. 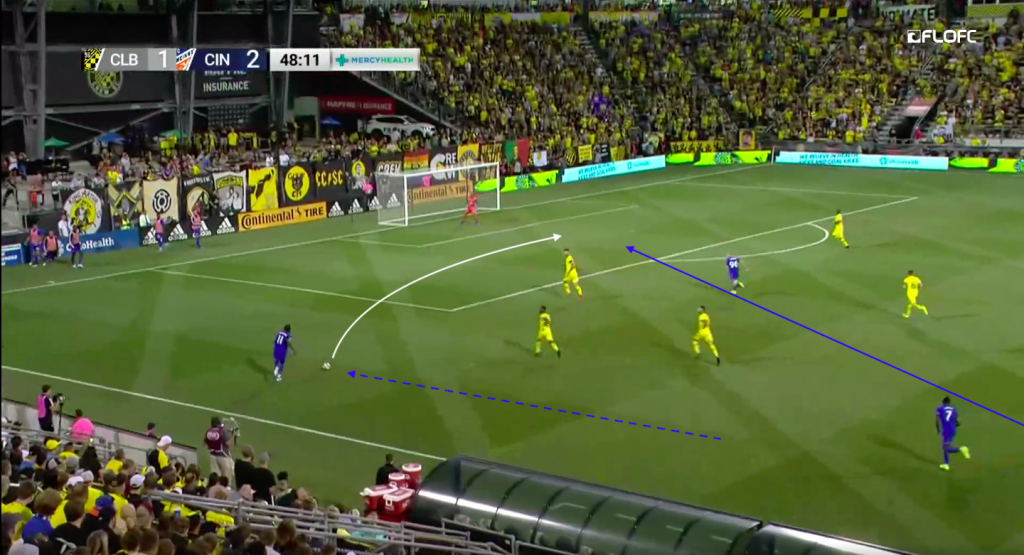 Developing an Understanding of the Press

There were a few evident deficiencies in the FCC high press system. Obviously the team’s fitness needs to improve to be able to play this high-tempo style. That will come with time. Jans will also need to continue to develop an understanding in the team of when to press forward and when to drop off their opposition.

When a player moves to press and his team doesn’t press with him, it leads to one frustrated player as he expends energy chasing down a ball only to see a simple pass completed beyond him. Pressing as a team is one thing that the Orange and Blue largely did well, though some improvement here could help with the fitness issues. A bigger problem,  then, is when the players charged with starting the press elect not to pressure the ball, but the team behind them still presses its opposition. 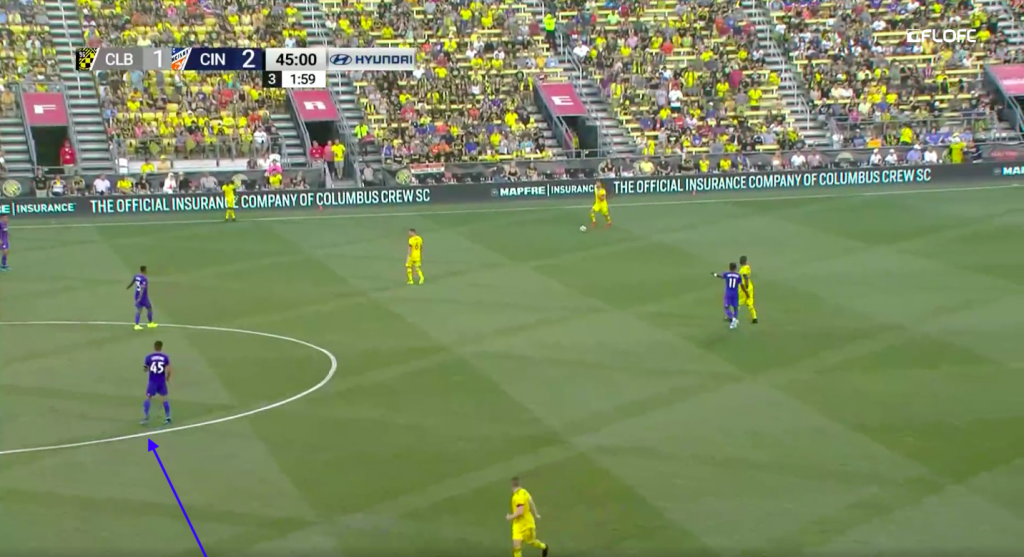 In the scenario pictured above, Allan Cruz and Darren Mattocks did not pressure the ball, yet Emmanuel Ledesma still pinched centrally into his high press position in the midfield. 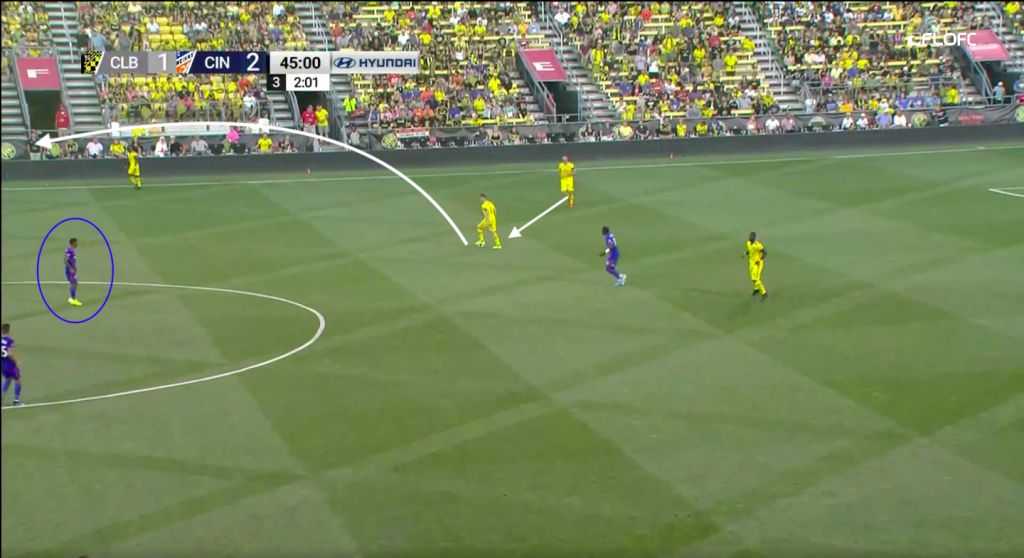 Columbus completed one simple pass and no press came, allowing Wil Trapp to turn and pick out a long ball to the opposite wing in behind Ledesma, providing the Crew with a dangerous attacking overload. 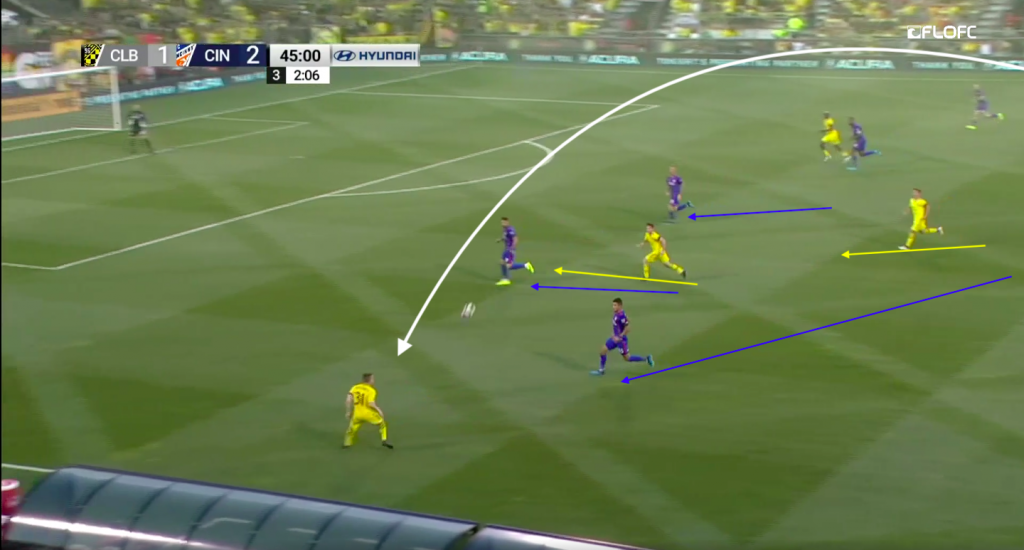 This happened on several occasions, allowing 25% of the Crew’s successful long passes to be switches of play causing these types of dangerous attacking scenarios.

The diagram below shows an example of what a high press can look like when there is pressure on the ball. 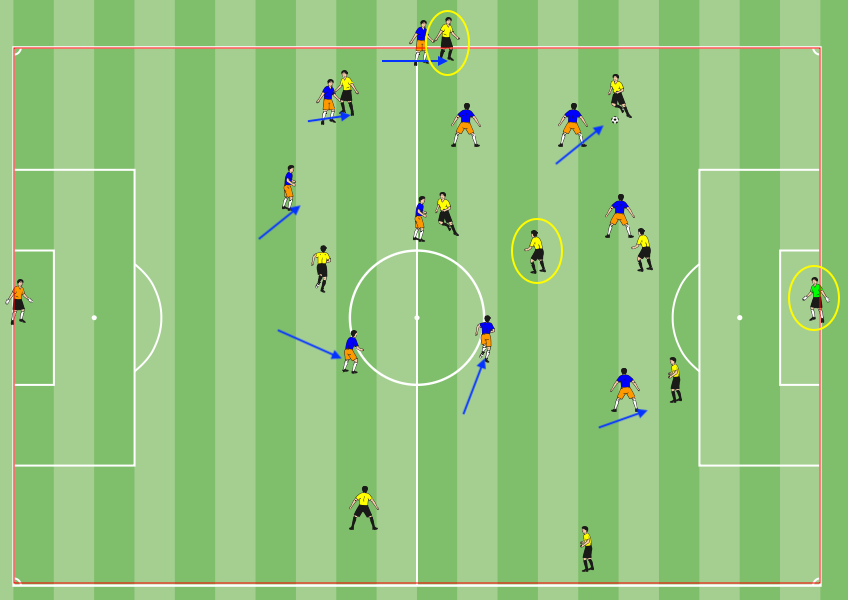 With the defending players pressed onto the opposition, few passing options are present. The opposition must play negative passes to try to get out of the press. The central player that is left slightly open is rapidly closed down by the opposite winger moving into the midfield.

Conversely, when there is no pressure on the ball, players must drop off their opponents. 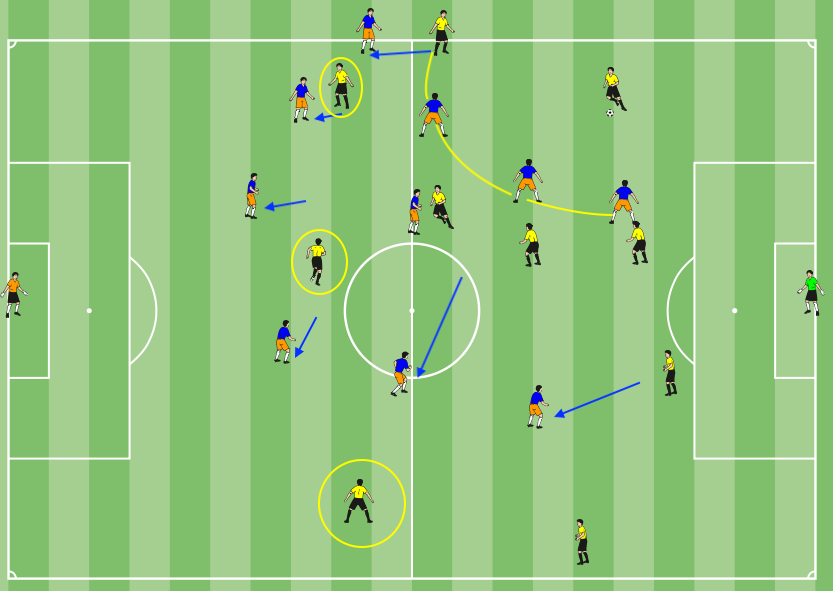 As the player on the ball has the time and space to look up and try to find a switch of play or a ball in behind, the defender must drop off and give the opposition the chance to receive balls into its feet but keep the play in front of them so as not to allow breaks or attacking overloads.

The high press 4-3-3 system with the outside backs pressed high and Cruz and Victor Ulloa pushed into the attack is exciting to watch and creates many chances. However, when not done correctly it also allows the opponent to get many opportunities on the break as well. Jans has begun to put his fingerprints on the FC Cincinnati team, and given time will turn the Orange and Blue into the up-tempo, possession based, attacking team that we all crave.