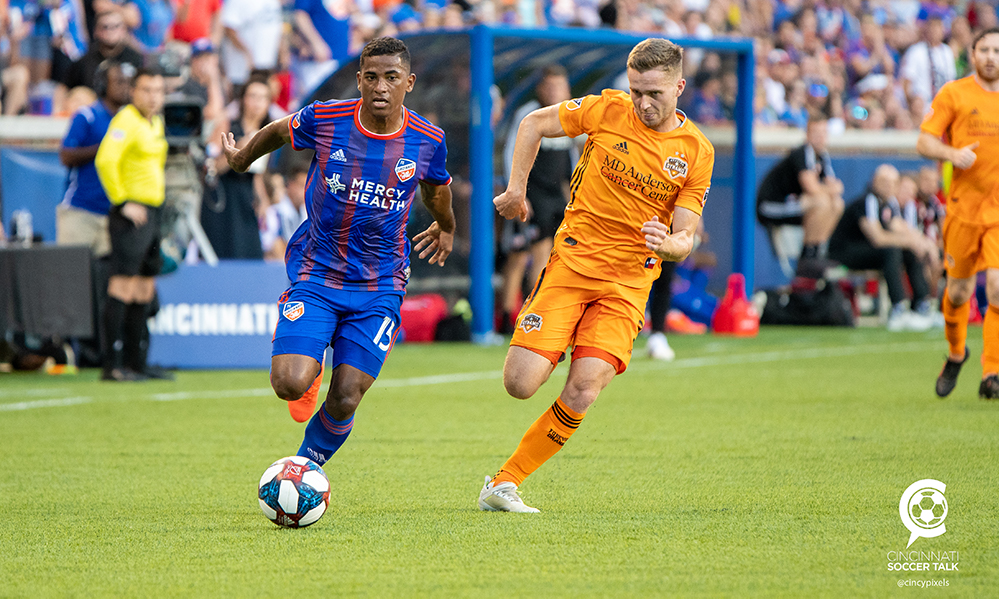 A win Saturday on the road against the Fire would make it two straight for FC Cincinnati.

FC Cincinnati heads to the Windy City this weekend to take on the Chicago Fire. This will be the first time the Orange and Blue faces Chicago as an MLS club outside of preseason.

These two clubs first met in July 2017 in one of the most historic matches in FCC history. FCC beat the Fire in penalty kicks during the U.S. Open Cup that year.

The Orange and Blue head into this match after winning their first match since Mother’s Day weekend. This win was instrumental in building club and supporter morale after an 11-match losing streak. Even though the win was not pretty, it was still desperately needed.

FCC will be looking to build on that momentum on Saturday against the Chicago Fire. Kickoff is at 8 p.m. from SeatGeek Stadium in Bridgeview, Illinois.

The Fire currently sit 10th in the Eastern Conference standings, only two spots ahead of FC Cincinnati. However, they have 13 more points. Despite that lead, they’ve only won one more match than FC Cincinnati. FCC will be looking to close this gap a little bit more on Saturday.

FCC will be in a much better starting position than the previous few matches.

Kendall Waston and Allan Cruz returned and started Saturday against Houston. Their absence was missed during the Gold Cup. And their presence on the pitch made a noticeable difference.

Additionally Alvas Powell returned to the pitch, fresh from the Gold Cup. Darren Mattocks is also ready to return and has been at practice, but there’s no news on if he’ll make the starting lineup on Saturday.

These players will be instrumental in shutting down the Fire’s strikers. Make no mistake, while the Fire may be near the bottom of the table, they’re not a bad team. In fact, they brought in a 5-1 win over Atlanta United, the 2018 MLS champs, last week.

The Fire is not going to be an easy club to beat, so FCC must bringing their A game.

Thankfully, FCC does have players available that have been able to score. Kekuta Manneh has become the club’s highest goal scorer, netting three so far this season. Rashawn Dally has scored once and will be available to play on Saturday.

Additionally, Emmanuel Ledesma and Frankie Amaya have proven to create chances and opportunities to score. These two players will be a valuable asset to FC Cincinnati’s attacking plan this weekend.

The return of Waston is also a huge bonus for the Orange and Blue. On top of being the best center back FCC has on its current roster, he’s also a leader on the pitch. His experience and talent are immeasurable when leading a team and keeping their heads in the game.

A winning mindset and a motivated mentality are going to be crucial to FCC’s success against the Fire.