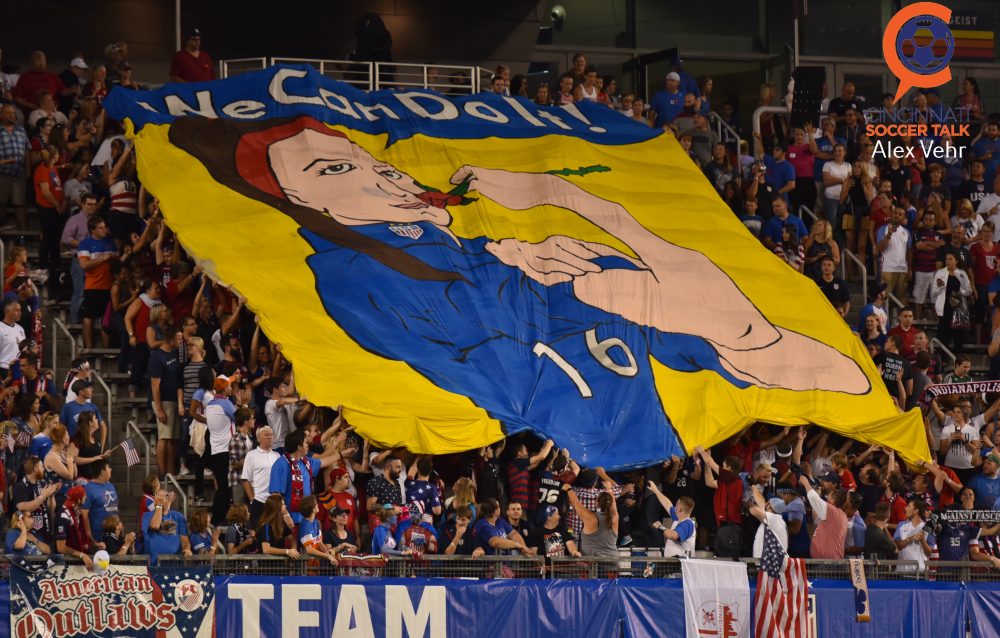 The USWNT advances to the quarterfinal round of the Women’s World Cup. Its success means just as much to America on and off the pitch.

In America, there aren’t many things you can count on, but the United States women’s national team is one bright light in the dark times.

The USWNT is a bright light in many people’s eyes, not just in the world of soccer. It is a beacon of hope in the eyes of any young female athlete; it is a source of inspiration. These women are role models and it doesn’t hurt that they are the most successful team in international women’s soccer.

The USWNT has eight Concacaf Championships, four gold medals in the Olympic Games and three World Cup Champions titles under its belt. Not quite a bad record for a team that has only been around since 1985.

I was introduced to the beautiful game in my late-teens. I had taken on my first “real job” and worked primarily with people from the Middle East and Africa. It seemed like every day there would be an iPad up with some match on, a new club to cheer for.

I started to feel and absorb the passion of my coworkers; their jubilance when their club scored, their heartbreak after a devastating loss. I started to feel that weird emptiness between seasons, between one league ending and another league starting.

My first World Cup was in 2006. I wasn’t emotionally invested, and I hadn’t yet picked a club. There wasn’t a particular team that really spoke to me. I wasn’t invested in whoever won (it was Italy), it was just nice to watch people play. But in 2010, I was invested. I don’t remember what match it was. I don’t even remember how. But the German national team chose me. I remember being glued to the television, interrupting Sunday night dinner, just so I could watch Thomas Muller and Philipp Lahm and Bastian Schweinsteiger, players I still respect and adore. I remember that joy, and it’s something I’ll always hold close

Women’s soccer, however, I was introduced to years later, in 2015; my friends that I had made bonding over the game insisted that I watch the Women’s World Cup. I didn’t even know anything about it because, up until then, my entire soccer background consisted of watching men play. I had no idea that the women’s team was such a big deal. And I am thankful every day that I started because the USWNT has changed the way I view the beautiful game.

I will never forget the joy and the excitement I felt at the sound of that final whistle. When the scoreboard read a 5-2 victory over Japan, I know I cried. I don’t remember crying, but I’m sure I did. The USWNT had brought home another World Cup Championship, and people everywhere were starting to embrace and honor them.

Now it’s 2019, and the USWNT is poised to make the finals again, with a lot of talent and a tiny bit of luck on their side.

Putting the controversies and inequalities aside, this is a team that has never given up. Even in the face of adversity, these women have proven themselves to be some of the best athletes and some of the best role models for girls, and women, to look up to. And that is something that goes beyond soccer; it goes beyond the lines on the pitch and the score on the board. Titles and championships and autographs are just the beginning.

What they stand for — it reaches everyone. It reaches the girls in the inner city, desperate for an escape and hoping they’re enough. It reaches the girls in the country who can’t afford a proper pitch or the best coaches. These women have a unique power to connect with young girls; they can empower them. This empowerment lets these girls know that they have the talent, the motivation, the drive and that they can do more.

Soccer is just the beginning — it’s about so much more than that. The hope and motivation give girls, give women, someone to look up to. The most dominant teams and athletes in the world have almost always been men. Girls have Mia Hamm, Abby Wambach, and Ada Hegerberg. Now, with the USWNT making a run for a back-to-back World Cup Championship, girls also have the likes of Megan Rapinoe, Alex Morgan, Carli Lloyd and so, so many others.

On Monday the USWNT faced their toughest challenge yet during this World Cup cycle — Spain.

After three impressive victories and a group sweep the week before, people thought that Spain would be easy, that the real challenge would be France later this week. After all, the U.S. had just beaten Thailand with a record-breaking 13-0. Spain couldn’t be THAT tough, right? Not quite.

Spain brought their A game, and it did not make a U.S. victory easy. It proved it could, and would, go toe-to-toe with the reigning Champs. Spain challenged the U.S. at every turn, even after the U.S. scored first in the seventh minute on a penalty kick taken by Megan Rapinoe.

It was only minutes later when the commentator’s curse struck again. The announcer had just acknowledged that the U.S. had not conceded a goal in 639 minutes and then — you guessed it — Spain scored in the ninth minute after a turnover outside of the box. Jenni Hermoso forced a turnover from Becky Sauerbrunn, sending the ball sailing into the back of the net.

It was enough to shake the supporters in the stand, but if there’s one thing that everyone knows about the USWNT, it’s that it doesn’t give up.

This is a group of women that excel in adversity and thrive under pressure. While Spain might’ve kept it on their toes for the next 70 minutes, the U.S. didn’t give up. It was a tough match with a slew of missed opportunities and shots just over the goal. The U.S. had plenty of chances but were unable to convert. Luckily for it, Spain was in the same boat — unable to capitalize.

The next chance to score came in the 76th minute when a Spain player made contact with Rose Lavelle inside the box. The official immediately called a penalty kick, but the foul went to VAR. In the agonizing moments of waiting for a VAR call that would potentially affect the entire outcome of the match, people were on pins and needles. Would it be a penalty kick or not? The U.S. team had not had any luck converting chances in regular play — would another penalty kick be its only chance to pull ahead? And if it didn’t get the penalty kick, could it rally together to avoid going to extra time in the intense June heat?

The official’s whistle blew, signaling to the U.S. to take the penalty kick, and Rapinoe stepped up. After already netting one 70 minutes earlier, it made sense that she would step up again.

The second the ball hit the back of the net, the U.S. supporters let out the collective sigh they had been holding. It finally felt like some of the weight was off. The U.S. was finally up, the end of the match was in sight, and it just had to hold the lead.

Another 20 minutes of tough defense and perseverance and the final whistle blew. And the U.S. was moving on to the quarterfinal round to face France on Friday.

Possession was nearly equal the entire match, with the U.S. completing nearly 100 more passes than Spain. The U.S. had 10 shots, two on goal; Spain had four shots with one on goal. Each team had received one yellow card throughout the match. The U.S. was fouled four times while Spain was fouled 18 times.

The Women’s World Cup is starting to gain popularity across the U.S., with an average of 3 to 5 million viewers tuning in to each match. That number is guaranteed to rise as it advances in the tournament.

The U.S. faces its biggest challenge yet on Friday, facing France, who also swept their group last week. France knocked Brazil out of the running on Sunday with a 2-1 win, securing their spot in the quarterfinal round.

No matter what happens on Friday, the USWNT has secured its place in American history. Its legacy, whether it results in another Championship or not, will live on in this sport. It will live on in the hearts of all of the young women they have inspired. That inspiration, that motivation, it lives on; it never fades away.